Historical Background
The day after the battle of Smolensk, Barclay de Tolly ordered a wheeling retreat towoards the Moscow Highway. To prevent the French from marching alongside the Dnieper River by the road, he set a detachment under Tuchkov at Valutino Gora to delay the French advance. AS French pressure built, Tuchkov withdrew behind the Stragan Rivulet, where he was reinforced by IV Corps.

The Battle of Valutino took place on 19 August 1812, between a corps of French and allied troops led by Marshal Ney, about 30,000 strong, and a strong rear-guard of General Barclay de Tolly's Russian army of about 40,000, commanded by the general himself. The Russians were strongly posted in marshy ground, protected by a small stream, about 20 Kilometers east of Smolensk. The French, attacking resolutely, captured the Russian position in the face of considerable physical obstacles.
http://campaigns.x10host.com/maps_war_1812.htm#_maps_ggg

General Gudin lost a leg to a canonball in this engagement, and died 3 days later. His body has been recently (July 6, 2019) exhumed in Smolensk.
https://www.livescience.com/65920-napoleon-general-found-in-russia.html 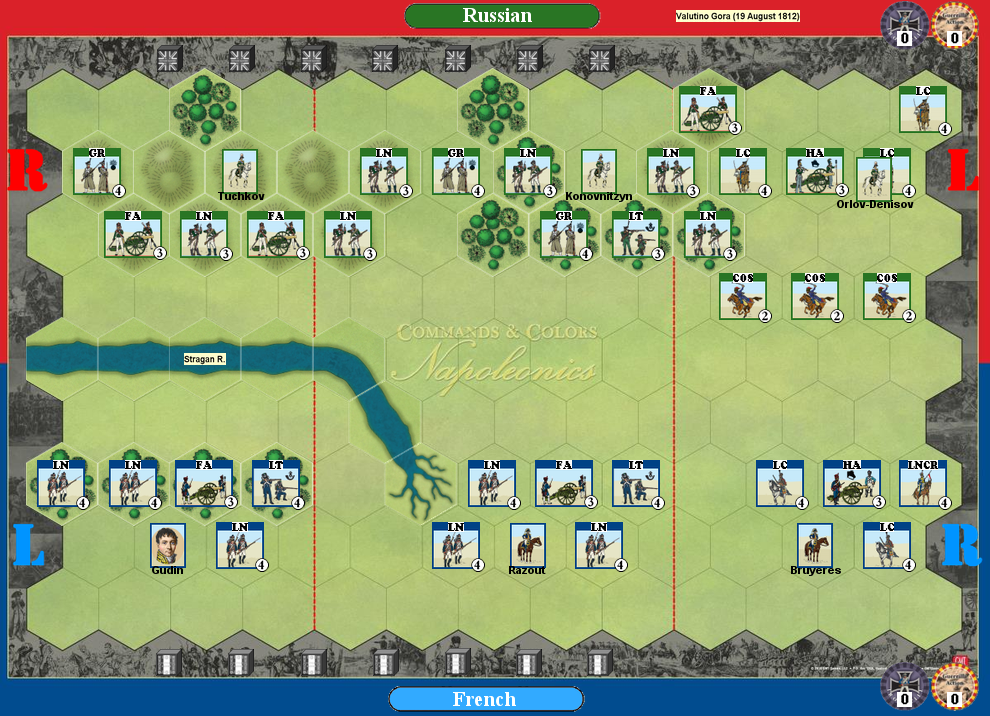 Special Rules
• The Stragan River is fordable
• Gudin is a Leader of Honor
• The French gain one Victory Banner for each French unit that exits the battlefield from any Russian baseline hex.
• Pre-Battle Mother Russia Roll rule is in effect. Saber and cavalry rolls have no effect.

As far as possible, the artillery should cover and command the surrounding country.~Maxim XXI