Historical Background
The Battle of Smolensk was the first major battle of the French invasion of Russia. It took place on 16–18 August 1812 and involved 45,000–50,000 men and 84 guns of the Grande Armée under Emperor Napoleon I against 30,000–35,000 Russian troops and 108 guns under General Barclay de Tolly. Napoleon attacked Smolensk, occupied by Prince Pyotr Bagration's Second Army and captured two of the suburbs. During the night the Russians evacuated the burning city.

The French artillery bombardment burned the city to the ground. Of 2,250 buildings, 84% were destroyed with only 350 surviving intact. Of the city's 15,000 inhabitants, about 1,000 were left at the end of the battle inside the smoking ruins. With over 20,000 casualties, it was one of the bloodiest battles of the invasion.
http://campaigns.x10host.com/maps_war_1812.htm#_maps_gg 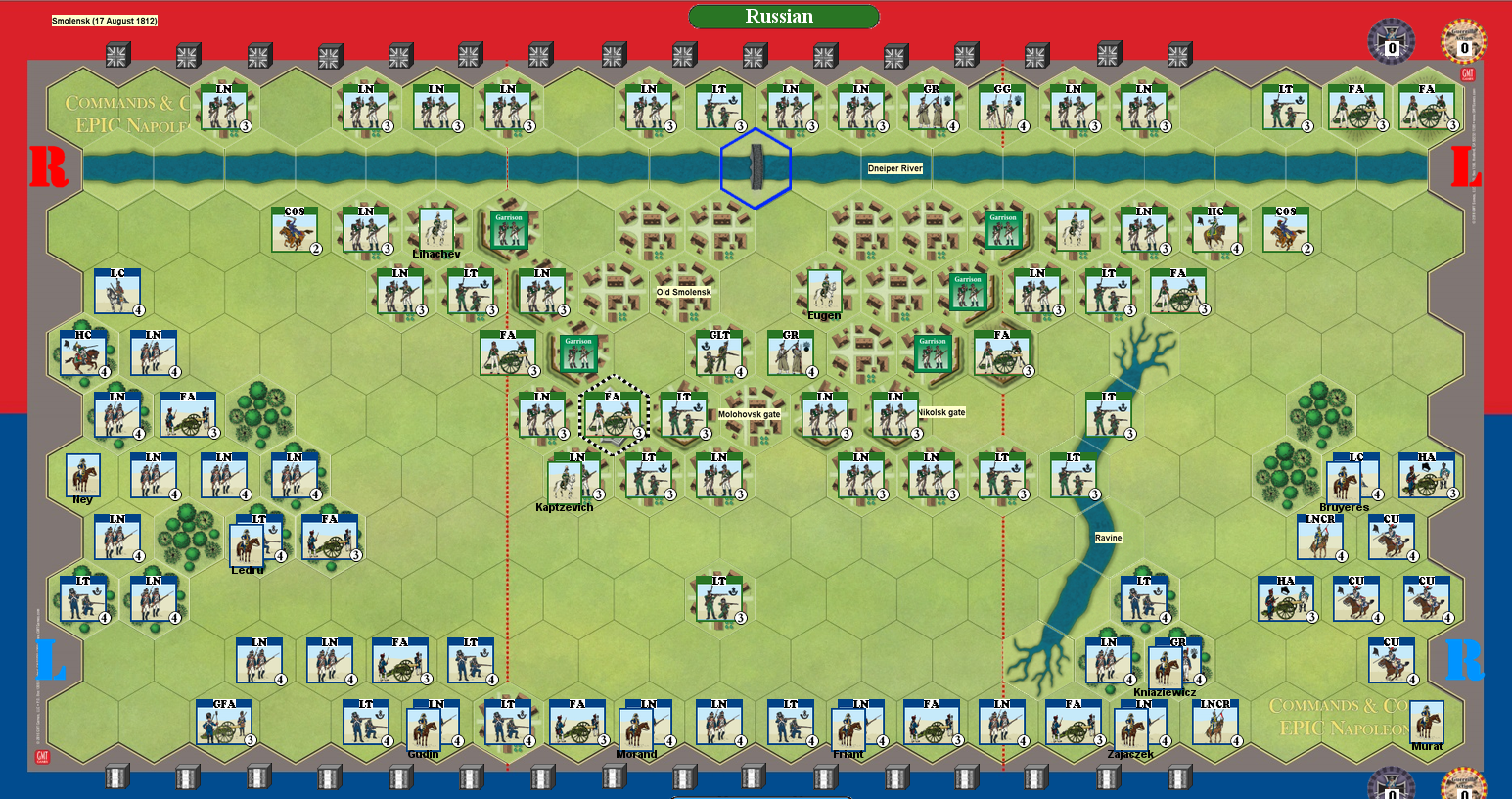 Mark-McG replied the topic: #7700 1 year 3 days ago
After 4 playtests I feel the scenario plays reasonable well and close enough to the battle, but needs some adjustments to balance it;

I have 3 main ideas around this;
1. Adjust the ravine to run closer to the town
2. Give the Russian infantry one extra die in close combat attacking a town or castle
3. Give a Time Pressure objective banner to the Russians if they play a Scout card
Time Pressure Objective (new)
When Time Pressure rules are in effect against the attacker, the defending player, after playing a “Scout (Left, Centre or Right)” Command card, may take a Permanent Victory Banner and draw one Command card instead of drawing two Command cards at the end of his turn. Taking a Permanent Victory Banner, instead of drawing two Command cards is not allowed, if doing so would give the player his final Victory Banner to win the battle.
Page link: www.commandsandcolors.net/napoleonics/th...nts-expansion-6.html

Mark-McG replied the topic: #7648 1 year 1 month ago
it is treated as a fordable river, but only infantry can enter a Ravine.

the restriction is otherwise on LOS. Only adjacent units can attack (melee) units in a ravine. The reverse is not true, infantry can fire out.

Units in a ravine don't block LOS, so units could fire through the hex as if it were vacant, with the proviso enemy units cannot ignore an adjacent unit in a ravine to do so.
ANDRE replied the topic: #7647 1 year 1 month ago
Does the RAVINE have combat and movement restrictions?

Mark-McG replied the topic: #7644 1 year 1 month ago
Russians need 20 LN and 10 LT units - substitute as needed
Napoleon IV replied the topic: #7275 1 year 7 months ago
Great scenario. Tried as a 2-player version: 6 hours of gaming, 16-10 to the French. French tried fighting their way up the ravine, but were beaten back, then a frontal assault in the centre led by Guard Artillery finally wore down enough Russian infantry.

Never leave gaps for the enemy to penetrate, unless it be to draw him into a snare.~Maxim XXXIV