Historical Background
Mother Nature continued to side with the Russians. As the French army retreated west, it was faced with the daunting task of crossing the unfrozen and unbridged River Berezina. On the west bank blocking the crossing was a force of 30,000 Russians under Admiral Chichagov. Wittgenstein with another 30,000 soldiers approached from the north on the east side of the river. Napoleon ordered Oudinot on the 26th to draw off the enemy to give his engineers time to bridge the river. The Russians took the bait and moved their main force south. Now the French engineers went to work, and two bridges were constructed in a matter of hours. General Eble, chief of engineers, was able to perform this miracle because he had disobeyd Napoleon’s direct order to destroy all engineering equipment. The Grande Armee began crossing, largely undisturbed. By the morning of the 28th,Wittgenstein’s Russians were advancing in earnest against Victor’s rearguard Corps on the east side of the river. When one of his divisions under General Partouneaux took the wrong road, the Russians surrounded and destroyed it. With the loss of the division, Victor was having serious trouble holding off the Russian onslaught. Napoleon ordered the Baden brigade to cross back to assist Victor, but the Russian kept advancing. The Russian’s finally retired for the day, when attacked by a gallant cavalry charge supported by the French artillery on the west bank. On the west bank, Admiral Chichagov was doing his best to break through the French perimeter to seize the crossing sites. Marshal Oudinot was severely wounded and his corps was pushed back. Marshal Ney quickly assumed command and ordered the French Cuirassiers to charge. The Russian fell back and did not attempt any further attacks on the west side of the river. Throughout the night the rest of the French army crossed the river. General Eble had urged the throngs of stragglers and camp followers to cross in the gaps between the French formations, but many did not do so. Reluctantly he issued the necessary orders to fire the bridges to prevent Russian pursuit. Thousands died as they stampeded vainly to cross, and thousands more perished as the Cossacks fell upon them.
The stage is set. The battle lines are drawn and you are in command. Can you change history? 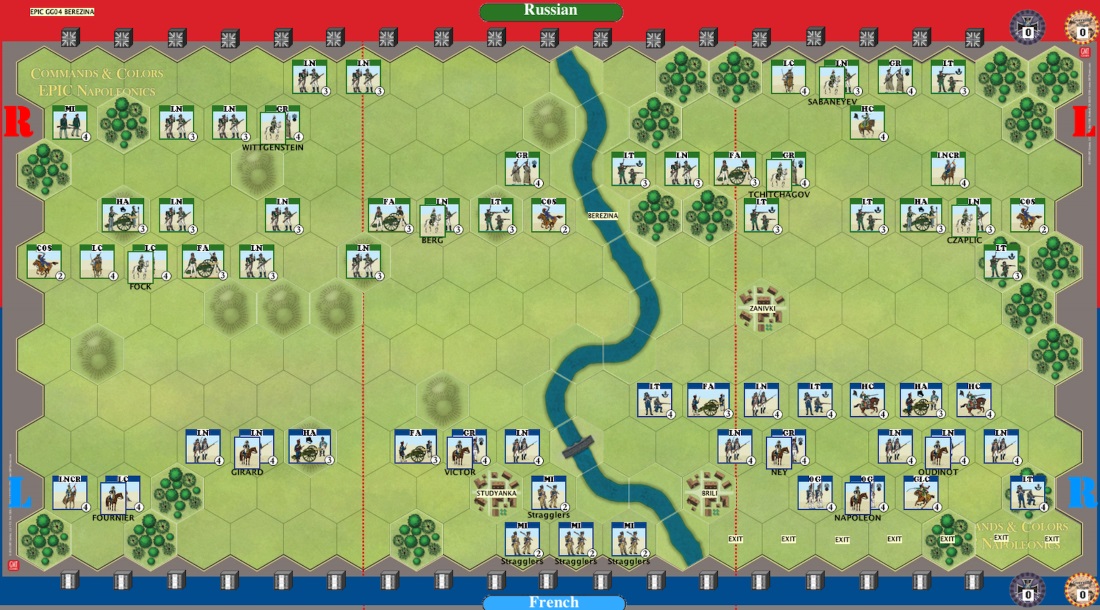 Special Rules
• Pre-Battle Mother Russia Roll is in effect twice (right and left bank of the river). Saber rolls are Cossacks too.
• Each turn one French unit under strength may exit the battlefield from any bottom hex of the right bank and will count as 1 Victory Point for the French player.
• Any French unit or Leader eliminated on the left bank counts as 2 Victory Points for the Russian player. The French Leaders cannot leave the board on this bank.
• If Napoleon leaves the board: The French player immediately discards 2 Command cards at random. If killed: The Russian player wins immediately.
• The River Berezina is impassable except on the only bridge. Any unit crossing the bridge must stop on it.

GG replied the topic: #7193 1 year 6 months ago
Hello! Please always consider the rules written in "Special Rules" as the latest official. Disregard old posts in the threads below. Enjoy the battle - GG

GG replied the topic: #5435 4 years 2 months ago
Please try it out with this little change in the special rules: "Any French INFANTRY unit or Leader eliminated counts as 2 Victory Points for the Russian Army"
I'll check that with Alessandro.

GG replied the topic: #5427 4 years 2 months ago
To be said: We use to play this scenario 2 vs 2 with a map of 6 SECTIONS (3 per player!) having the right french player concentrate on leaving the field while the left player is concentrate on evacuating the left bank and it is balanced this way. The point is playing it with this official 3 sections map may create problems for the French to achieve both strategy with efficiency? Just try it out and let me know!
Regards - Marechal d'Empire GG

Hope some day we will meet to play it !

GG replied the topic: #5405 4 years 2 months ago
I love this battle - The only point is we play it with 6 sections and 2vs2 so the right french player can use the center & right cdt cards to exit and it's balanced but i donno the balance if you guys play it with the official 3 sections - Can't wait for your reports!
Read More...

As far as possible, the artillery should cover and command the surrounding country.~Maxim XXI