When Napoleon arrived at Friedland, Bennigsen’s Russian army was holding a four-mile line in what Napoleon determined was a very poor defensive position, with its back to the river Alle. In addition, the Mill stream bisected the Russian line which also gave Napoleon reason to attack at once. Around 5:00 PM Ney’s divisions advanced. Opening a battle so late in the day surprised Bennigsen, forcing him to rescind his order to with draw back across the Alle during the night. The Russians would have to offer battle where they stood.

The Russian left became the scene of advances, counter attacks and swirling cavalry actions. Both sides committed reserves to these combats, but the Russians weakened their center to do so. Seeing the weakness, the French horse artillery commander forwarded his guns to within 60 paces of the Russian infantry, and at that range the Russians took huge casualties – Eylau was avenged. Bennigsen launched an attack on his right in an attempt to take pressure off his left and center, but the French flank held. One final attack by the Russian Imperial Guard against Ney did not succeed in stopping the French and only served to buy time for the Russian army to retreat. But for the inaction of Grouchy and his French cavalry, the Russian army would have been largely destroyed. As it was, Russian casualties were catastrophic. The outcome of the Battle of Friedland spelled the end of the Fourth Coalition.
The stage is set. The battle lines are drawn and you are in command. Can you change history? 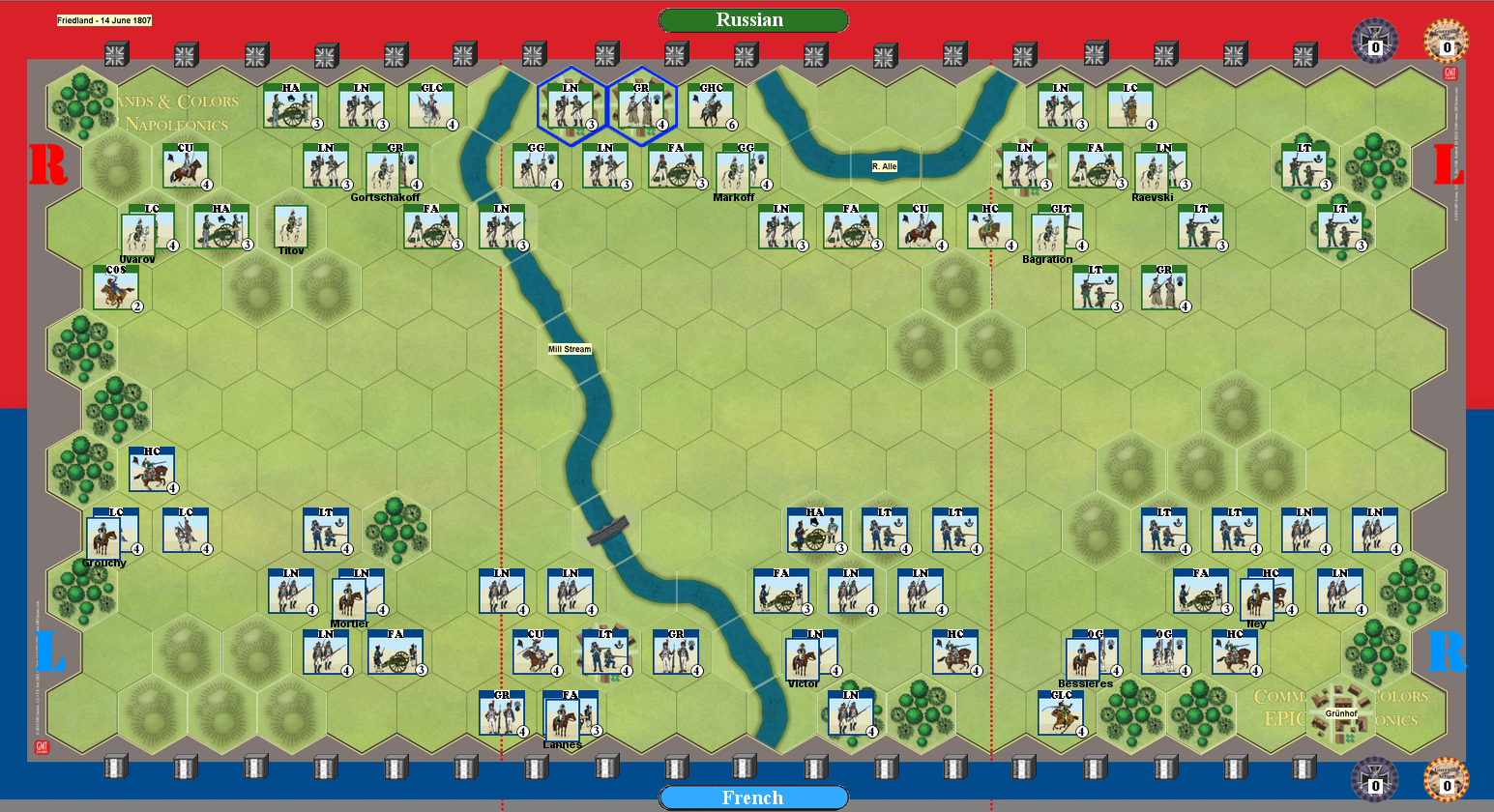 At the beginning, the action takes place on the french left. Fred launched a cavalry charge which after a few turns destroyed the entire french light cavalry and killed Grouchy (Waterloo will be won by french side !!!). The french reaction will have to wait until an attack from the fearless (and very lucky) infantry and the unique heavy cavalry led by Nicolas which made great work.

In the center, Guillaume tried to make the same sending the Heavy Guard Cavalry which completely failed its charge against the french grand battery and was destroyed in two rounds... The french infantry suffered heavy losses at the beginning due to the squares attacked by russian infantry.

In the french right, the action was almost fire exchanges between Yan and Benoît before the heroic bayonet charge which led to victory.

3 russian generals were killed in action (2 french left and one in center) and one for the french side. Friedland remained russian.

An interesting battle with 4 almost rookies (with an experience of Richard's games like M44, Ancients, Battlelore and Samurai Battles). The russian side led the game until Heavy Guard Cavalry has been destroyed that made a complete change of the physionomy of the game.

Thanks for the game to my comrades !

To advance or not to advance is a matter for grave consideration.~Maxims VI