Historical Background
Napoleon, although outnumbered, was determined to hold his position knowing that Ney was coming up on the left and Davout on the right. His plan was a double envelopment of the Russian Army. Bennigsen’s four Corps and cavalry were deployed on the heights in front of Eylau, but could not throw up field works because the ground was frozen solid.

Around 8:00 AM the Russian guns, positioned somewhat forward of the main line, opened fire and the French artillery replied with greater effect. Tutchkov countered a French probe on the Russian left, and Soult’s IV Corps was hard pressed to hold its ground. At the same time, the Russian cavalry attacked the advanced guard of Davout’s III Corps. To take the pressure off his flanks and allow
Davout’s corps to advance against the Russian flank, Napoleon ordered his center forward. Augereau’s VII Corps advanced into a blinding snowstorm, lost their bearings, and veered left – directly into the line of fire of the massed 70 gun Russian grand battery. A massacre ensued as thousands of French soldiers were cut down within minutes. The survivors retreated to Eylau. The French center had ceased to exist. Bennigsen seized the opportunity to counterattack. Twenty thousand Russians advanced irresistibly across the valley, driving the French back to the town.
The stage is set. The battle lines are drawn and you are in command. Can you change history? 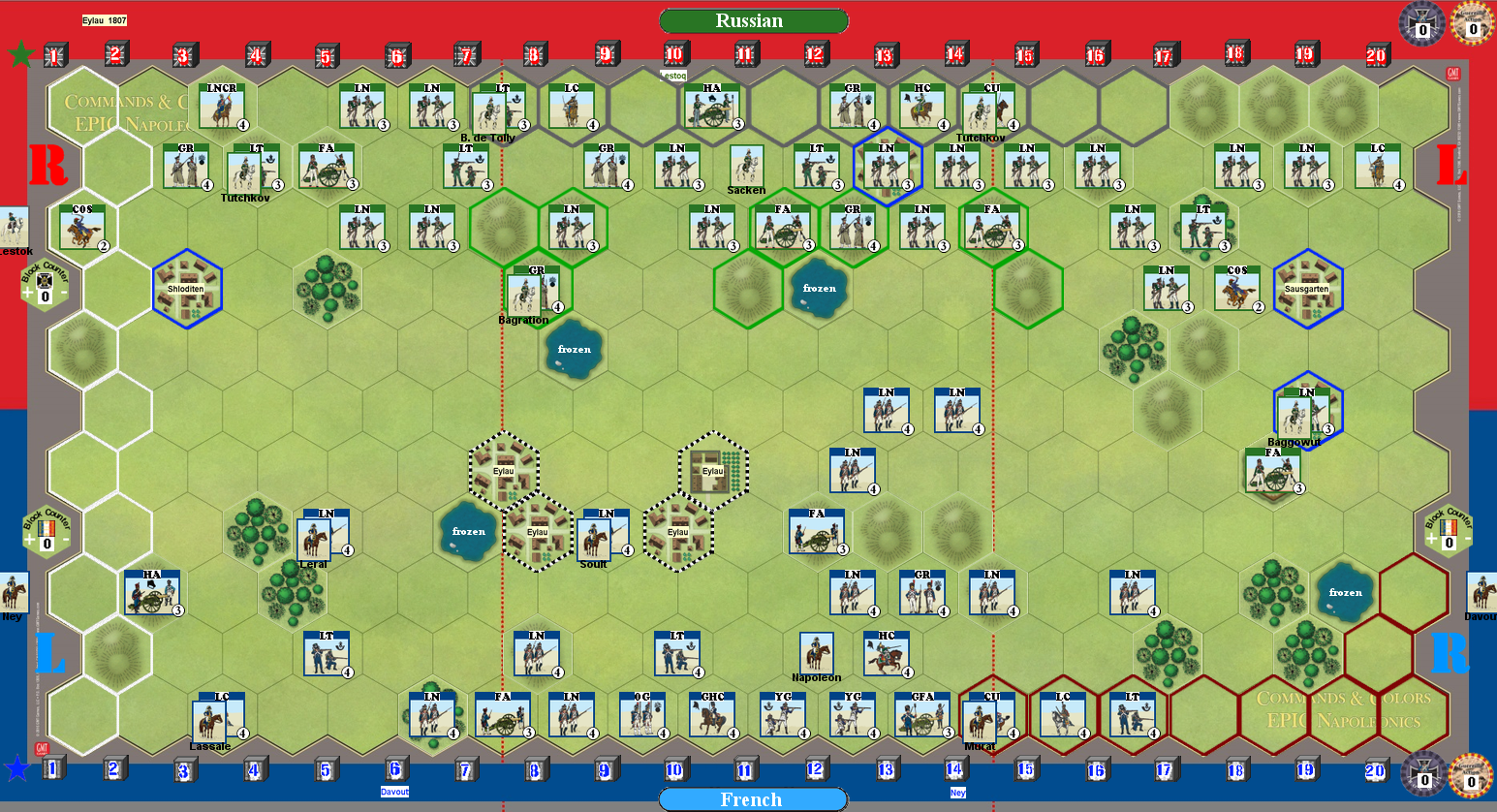 These units are placed immediately after the Command cards are played, and can be ordered in that turn
Units can enter the game only in free hexes and immediately join the battle before the order,if the hexes are occupied, they never enter

Hawkmoon replied the topic: #7791 7 months 2 weeks ago
20-8 for the french. The arrivals of Davout and Ney have fasten the russian defeat.

Hawkmoon replied the topic: #7790 7 months 2 weeks ago
Hi, interested to play it with my friend Guillaume tonight. there's an artillery with fieldworks on a hill : how many sides, please ?
And how much dice for Mother Russia Roll ?
Thanks

Russians need 17 LN units and 5 LT units
Hexagoon replied the topic: #7338 1 year 4 months ago
We played this using the blocks and Epic game board. Despite having all the expansions, there were not enough Russian Line, so I used the expedient of using yellow (Spanish) Light Infantry for the Light units, and green (Russian) Light Infantry as Line. It looked and worked fine.
As the French player I thought it would be an inevitable victory through weight of numbers, but it was so close, 20-19 in the end, and the Russians could have pulled it off with their final attack but only scored 1 hit from 5 dice. Too much happens in a game this size for me to record the swaying back and forth, but suffice to say a very satisfying scenario, a real tough battle and it could have gone either way. Thoroughly enjoyable scenario.

The transition from defensive to offensive is one of the most delicate operations in war.~Maxim XIX