Until now the French engaged only part of the Russian army: Bagration's force and part of cavalry which withdrew across the Alle. With Bagration's troops out of the way, the powerful Russian artillery deployed along the entire position and opened fire. Legrand's infantry division rushed forward as it was intolerable to stay under such a galling fire. Savary's Guard Fusiliers left the safety of the Lawden Wood and marched on Legrand's flank. The 26th Light Infantry stormed the Redoubt #2. With muzzles of their cannons projecting through the embrassiers and ammunition close at hand, the Russian gunners awaited the French. Nothing however could stop the 26th Light, they carried the redoubt about 7 PM. The two Russian battalions defending the redoubt Number 2 also suffered heavy casualties.

Meanwhile Bennigsen brought over the Alle River the whole of Dohturov's corps (3rd, 7th and 14th Division). Grand Duke Constantine's 1st (Guards) and 2nd Division formed the reserve.
Half of the Prussian Towarzysze Regiment (lancers) attacked the 26th Light before being driven back by musketry. At 8pm, the Kalouga Musketiers, having its grenadier battalion in the front, retook the Redoubt #2 at bayonet point.

The Russians prepared a massive counterattack. Forward moved the 2nd, 3rd and part of the 6th Division. Shikanov mentions two other musketier regiments advanced with the 2nd Division. The best of them was the 2nd Division because it consisted of the excellent Pavlovsk Grenadiers and the St. Petersburg Grenadiers.

The French infantry however stubbornly held their ground with musketry and artillery fire. Once the advancing Russian columns halted under the terrific artillery fire, the 10th Light (one of the best in the French army), 43rd, 46th and 57th Line (nicknamed "The Terrible") charged with the bayonet. The Russian masses wavered and then slowly fell back.
http://mapswar2.x10host.com/Battle_of_Heilsberg_1807.htm#_Fight_For_The_Redoubts 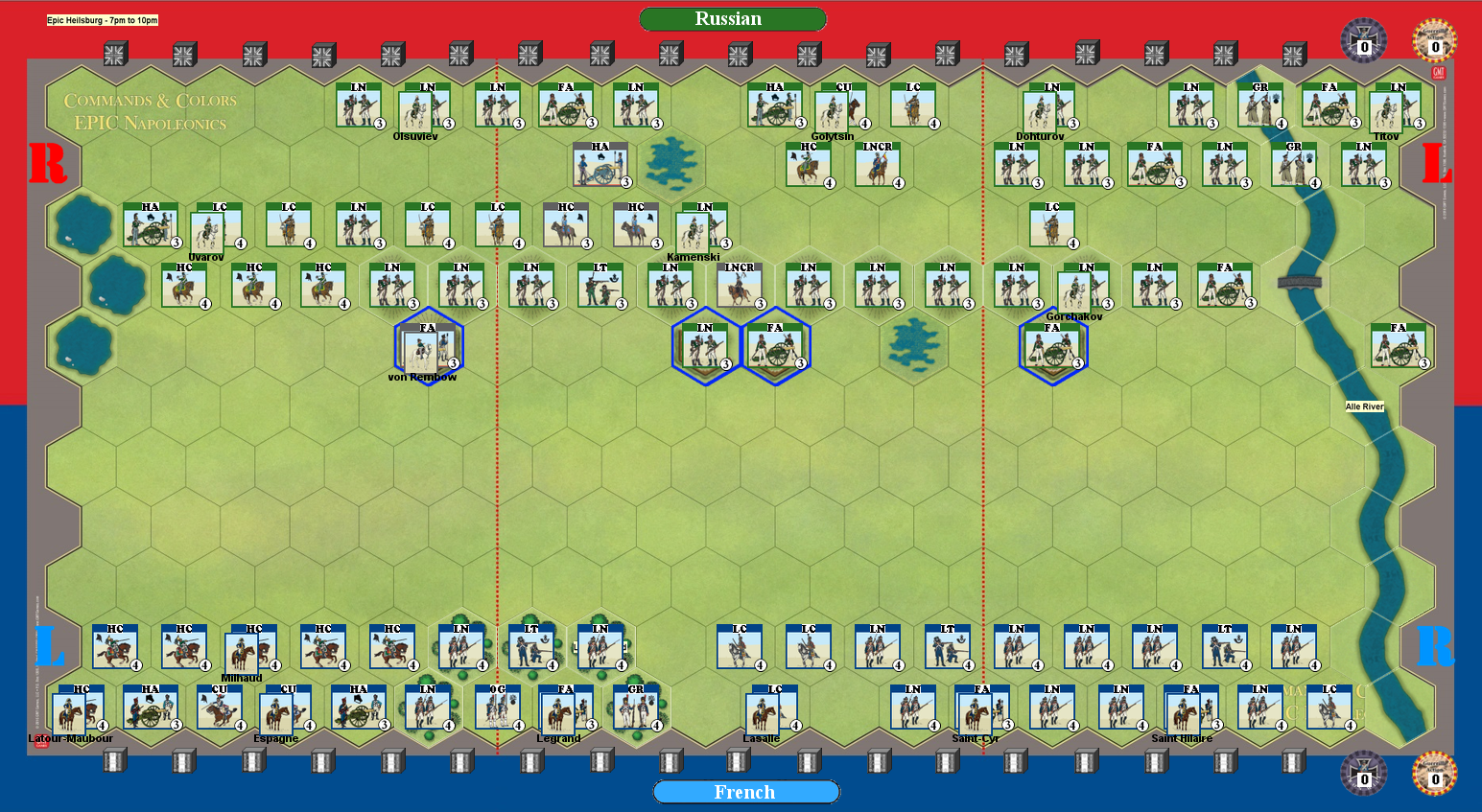 Hawkmoon replied the topic: #7725 9 months 1 week ago
A french victory (18-6) on the wings. The 2 redoubts were taken. Nice work of the french Cavalry corps on the left and the sacrifice of the infantry and cavalry on the right led to victory.
Vive l'Empereur !

Hawkmoon replied the topic: #7724 9 months 1 week ago
Thanks a lot from Guillaume "Butcher" Ambroise and myself.

Hawkmoon replied the topic: #7722 9 months 1 week ago
OK thanks.
Can you tell me the number of each kind of tiles, please ?

Hawkmoon wrote:
It is said that The river Alle is unpassable and there are two Grenadiers units on it. We want to play it tomorrow evening.
Can we consider that the entire river is fordable or not ?
Thanks in advance for the answer.

Hawkmoon replied the topic: #7720 9 months 1 week ago
It is said that The river Alle is unpassable and there are two Grenadiers units on it. We want to play it tomorrow evening.
Can we consider that the entire river is fordable or not ?
Thanks in advance for the answer.

Waterloo-Simon replied the topic: #7286 1 year 5 months ago
Great game tonight - really tight and French won 18-16 but lost virtually all their cavalry and Allies would have won the 2 banners they need on their next turn with two cavalry down to one block each. Well done Mark, great scenario.
ANDRE replied the topic: #7265 1 year 5 months ago
You need to add Epic to this scenario and Smolensk in the title