Historical Background
The Battle of Fleurus, on 26 June 1794, was an engagement between the army of the first French Republic under General Jean-Baptiste Jourdan and the Coalition Army commanded by Prince Josias of Coburg during the French Revolutionary Wars. Both sides had forces in the area of around 80,000 men but the French were able to concentrate their troops and defeat the First Coalition. The Allied defeat led to the permanent loss of the Austrian Netherlands and to the destruction of the Dutch Republic. The battle marked a turning point for the French army, which remained ascendant for the rest of the war of the First Coalition. The French use of the reconnaissance balloon was the first military use of an aircraft that influenced the result of a battle.
The stage is set. The battle lines are drawn and you are in command. Can you change history? 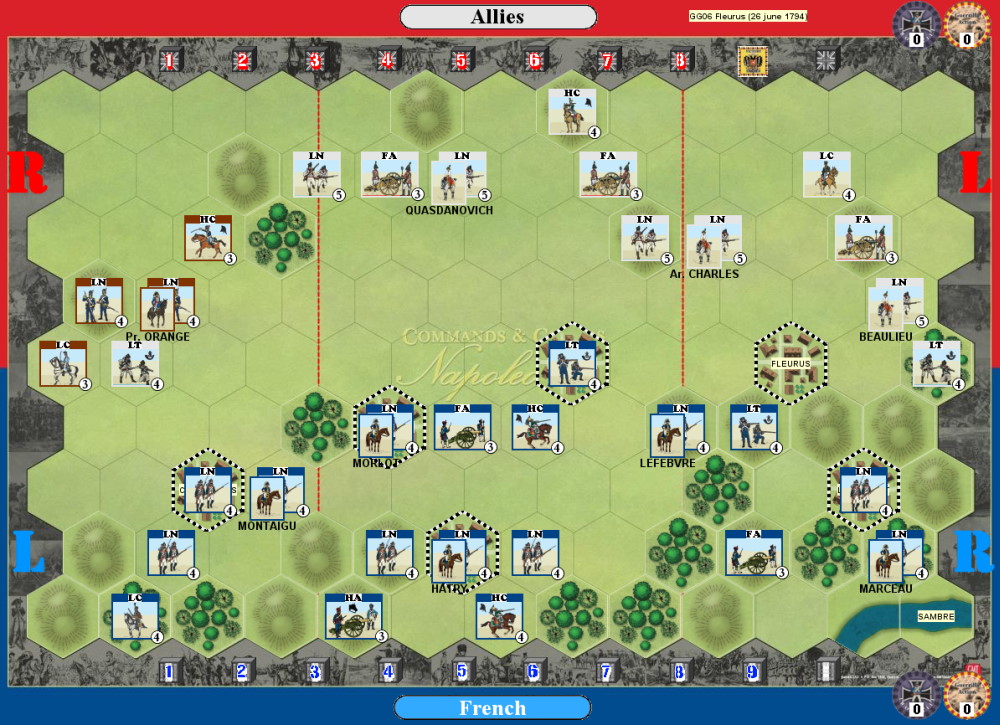 • The French infantry is not yet very experienced and organized so the French Line Infantry do not get +1 die when battling in melee against enemy infantry.

• French balloon watching: At the start of any turn during which a scout card is played (Allied or French): The French player can watch the full opponent hand.

• The Sambre river is fordable.

thomas86 replied the topic: #8016 15 hours 20 minutes ago
The French infantry is not yet very experienced and organized so the French Line Infantry does not get +1 die when battling in melee a gainst enemy infantry.

Hawkmoon replied the topic: #7983 3 weeks 4 days ago
Hi Comrades, we've been playing Fleurus yesterday at our club "Les Prétoriens" with Guillaume "Borodino's Butcher" Ambroise. I was very lucky, having killed Prince of Orange during the 1st game and 2 french generals during the 2nd. The 2 games showed the same physionomie : There was a dextrogyre movement : French advanced on their left flank destroying the Dutch troops. Austrians so did the same on their left flank destroying the less capable french Line Infantry. In both games, Cavalry paid a heavy tribute.
1st game : 9-6 for the French
2nd game : 9-5 for the Allies
ervinjason replied the topic: #7931 2 months 3 weeks ago
The French player must remember to watch ALL the opponent cards (including the tactician cards if using them) when a scout card is pl a yed.

mmcdaniel17 wrote:
What does the star represent next to the Allied Victory Markers above?

I agree > Those markers are used in other scenarios & expansions

mmcdaniel17 wrote:
What does the star represent next to the Allied Victory Markers above?

I think you mean the black/grey "Iron Will" counter ?  If so, not relevant to this scenario.
mmcdaniel17 replied the topic: #7897 3 months 2 weeks ago
What does the star represent next to the Allied Victory Markers above?
mmcdaniel17 replied the topic: #6854 1 year 11 months ago
GG06 Battle of Fleurus from the 1st Coaltion Maps from the C&C net site...brutal combat on the French left...Allied assault on the French left was a total disaster...better luck against the French center...results French 9VPs to the Allied 7. Casualties in blocks - French Inf 25 and 5 Cav; Allied Inf 32, 5 Cav, 1 Art and 1 Leader...4 hours including setup.

LARS replied the topic: #6846 1 year 11 months ago
French were ahead 8-4 and Charles took the heavies and lights and destroyed the French center. Austrians pulled one out of the fire 9-8. Very exciting game.

GG replied the topic: #6359 2 years 8 months ago
TY again for the tryout!
My God what horrible cards and dice rolls you had!
I was suffering as much as you because of the ugly image this could give you about my scenario LOL!

castanos replied the topic: #6358 2 years 8 months ago
Enjoyable scenario!. Prerry much action in the flanks. With balanced cards at the beginning it won't be easy for the French. My first time commanding an Aistrian army and using tactician cards

GG replied the topic: #6323 2 years 9 months ago
The French player must remember to watch ALL the opponent cards (including the tactician cards if using them) when a scout card is played.
Read More...

Soldiers generally win battles; generals get credit for them. ~Napoleon