We thought, with Hawkmoon von Köln, to make a small "initiation kit", to initiate in your Club young (or older) real true beginners at Command & Color Napoleonics..

We noticed, after doing that with CC Ancients for some years, that beginners like to go quickly into the action, to play most cavalry and also prefer simple aid cards (this is an average, there are particular cases..)

So we did this package : brief summary of the rules to read before play (more explanations given during play), simple reference cards for terrain & units, plus a fun and quick scenario with cavalry.

Note also that beginners prefer often to play with figures (15 to 28mm), but they are not supplied in the kit...

(this is an historical scenario, but not designed for elaborated strategies.. so enjoy and have fun)

I think that this is the best contribution to CC:N I have seen so far anywhere

your Scenario Editor was A1, but has limited appeal, this has major appeal and will go a long way towards getting people interested in playing.
My I suggest that you submit it to GMT as an andon and that Ale make this a sticky on the home page.

Less More
9 years 8 months ago #304 by Hawkmoon-von-Köln
Replied by Hawkmoon-von-Köln on topic Re: Venta del Pozo - Initiation Kit
Thanks for your enthousiasm, Chris !
We'd played this scenario a several times (with Maël a young member at our saturday afternoon games club called "Jeux & Figurines").
Pascal is a great "mad man" and works 'til perfection (He has a lot of time to paint figs, traduce rules and create scenarios).
Now in Le Mans (Homeland of the famous pork "Rillettes" and the 24H00 motor races), we are about 10 playing CCN and a 1st exhibition in a WH40k tourney will occur in the 26th of June (with Ancients and M44).
Hoping that CCN gamers will increase...
See you next time
We ride the tricycles
of true metal of steel
While others bands play,
we eat happy meal
In the forest of minerals,
The posers we kill !
Nanowar of Steel (Blood of the Queens)

9 years 8 months ago #305 by alecrespi
Replied by alecrespi on topic Re: Venta del Pozo - Initiation Kit
Hi guys,
just downloaded it and made it available on this website.
CLICK HERE .
Will write soon a presentation article.

Curto took the bait and sent his center unit over the bridge to engage Cottons Cavalry. They reduced them to one block, Cotton encouraged them to hold but they failed to inflict any casualty's in return. Then the KGL lunched the Ambush, firing on the French Cavalry's exposed flank. Reduced to one block it fled back over the stream in panic.

Realising it was a trap, Boyer Advanced the heavy cavalry into the stream, avoiding the bridge, whilst Curto sent another light unit to flush the woods. The KGL 1st stood proudly in line and accepted the charge. The surprised cavalry missed in their attack and took one casualty in return. The KGL 2nd, meanwhile, pulled back to the hills, forming cover for a possible fighting withdrawal. The 1st pinned the French light cavalry in the ford and they chose to retire and reform, reporting back to Curto.

Desperate to regain the initiative, Boyer Ordered a Cavalry Charge, The Heavy cavalry, accompanied by Boyer himself, attacked the hills whilst Curto divided his remaining units between Cotton and the KGL 1st in the woods. The British Light cavalry on the Hill in the center, were simply brushed aside in the charge, the momentum continuing down the other side eliminating the the British Heavy cavalry as well, suddenly the French had two banners.

The Second British Light Cavalry managed to hold the hill, but it’s one remaining block could do nothing in return. Meanwhile Cottons sole attached block was also eliminated, and he fell back to the protection of the KGL 2nd on the hill, who promptly formed square around him in the face of the perusing French Cavalry, exchanging one block each in the process. True to form, the KGL 1st held the line and chose to face of the charge, falling back 2 in good order, and leaving the French Cavalry tangled in the woods.

Bock led his remaining heavy cavalry around the hill to catch the french on the Flank, reducing them one block and pursuing them back to the stream before exchanging another block each. The Horse Artillery quickly formed up and fired, to no effect allas, and were forced to retreat. Boyer’s Heavy cavalry now finished of the remaining British light on the hill before turning it’s attention on the Horse Artillery. The Artillery, contrary to expectations, stood their ground in the face of the French Heavy Cavalry, taking no hits and fired Grape shot at point blank range, claiming two hits and mortally wounding Boyer himself. Unaware that their commander had fallen, the French light cavalry broke off the attack against the square and went to support the Heavy Cavalry pined in the ford. They eliminated the the pursuing British Heavy Cavalry for a 5th and final banner.

Boyer had won but did not live to see his greatest victory.

An excellent scenario, fun to play, a surprising twist and a great introduction that showed the effects of Square, Retire and Reform, Breakthrough Attacks and when it is safe to face cavalry in line rather than form square. In this case it also showed how one card can virtually win the game.

Having not met the criteria, the British could not gain banners by withdrawing. I think that is possibly the most innovative Scenario rule I have seen in any of the C&C games to date, and is exactly the sort of design criteria that avoids the hunt the last banner syndrome. The British had a sound objective, get one kill then a fighting withdrawal, they failed and had fun doing so. I made one error in setup by omitting Halkett, but as it is he would not have had much effect.

Despite being a relatively experienced player, this scenario actually gave me more confidence and experience in using Cavalry, I will be less reserved with them in future and I suspect any novice that uses this Initiation Kit as a grounding will gain a quick advantage over infantry focused players like myself.

I will definitely be using this scenario as a teaching aid, and having all of the relevant unit and terrain information printed on the back of the scenario sheet certainly helped play and cut down on table/rules referencing.

10 out of 10 for Presentation, fun, utility and function.

Less More
9 years 8 months ago #311 by pascal72
Replied by pascal72 on topic Re: Venta del Pozo - Initiation Kit
Wow.. thank you very much Chris for this kind feed-back...

Yes, the position seems more strong for the British player at the start, but as you noticed, French cavalry charges can be quickly devastating, even with average cards and dices..

Thanks also to Hawkmoon for his patience, playtesting eight following times this scenario last weekend..

For the little story : we had a little divergence with François (Hawkmoon) tuning the scenario. Following the real battle order, the French have in fact one more cavalry unit : General Faverot's brigade (15th Chasseurs, Duchy of Berg Light Horse and Gensdarmes). As I thought the scenario was already advantaging for the French, and as we lack at the moment counters (and characteristics) for Light Horse Lancers (of Berg) in CCN, my preference was to suppress this unit.

you can test a variant for Venta del Pozo with this unit (just take the GHC counter : Gensdarmes's look is as Horse Guard Grenadier and play it as Light Cavalry until new units.. may be in the next expansion?) : 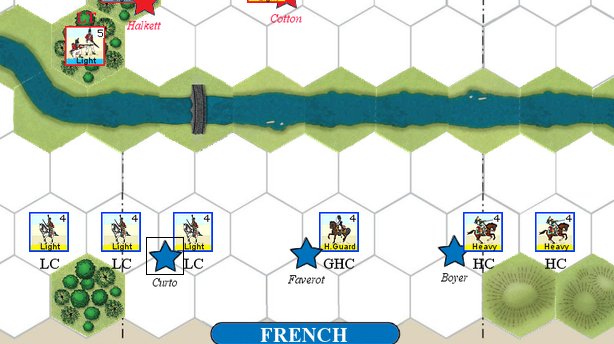 in this case, I think the British player may be allowed to withdraw his troops after loosing at least one of HIS unit (not obligation for him to eliminate a French unit).. of course, this variant needs to be more playtested, so don't hesitate to give your advices...