Written by Roger Leroux on 09 February 2011. Posted in CCN Related

Many thanks to Roger Leroux to let us post this review (originally posted on BGG). 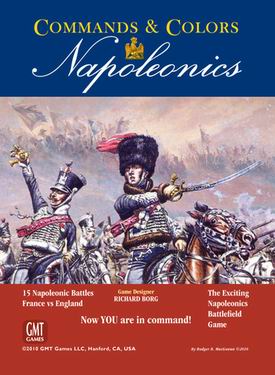 "There are but two powers in the world, the sword and the mind. In the long run the sword is always beaten by the mind." - Napoleon Bonaparte

Hello and welcome to the latest edition of Roger's Reviews. I've been playing board games since I was a wee lad and wargames for over thirty years. I've long been a fan of Richard Borg's engaging and easy to absorb commands and colors system. Of the games that use the same or at least very similar core mechanics I've also played Battle Cry, Memoir '44 and Battlelore.

Commands & Colors: Napoleonics (C&C:N) is a tactical battlefield game pitting two players against one another in a Napoleonic setting. As with other games in this series, hand management is key to your success. Good tactics and the occasional lucky die roll don't hurt either!

Commands & Colors: Napoleonics comes in the 3" deep GMT box and it is simply packed with components.The box weighs a little over 4.5lbs in no small part due to the large number of wooden blocks that come with the game. 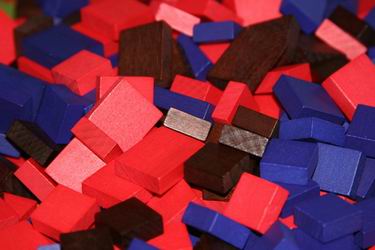 Complementing the nice wooden blocks is a beautiful green mounted map board with the name of the game in the centre of the map. I'm used to seeing the name of the game on a wargame map, but it is a little unusual to see it so centrally placed here. It immediately made me think of various indoor sport leagues having the team's logo in the centre of the playing area. No need to fret though, it doesn't detract at all from playing the game, and it'll often be covered by terrain tiles anyways. 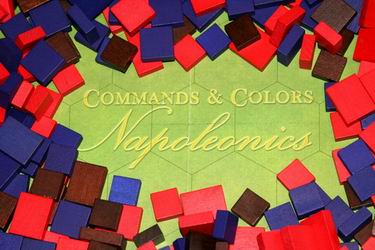 Speaking of terrain tiles, the base game comes with 56 double sided terrain tiles showing everything from forests to rivers to be used in the fifteen scenarios that come in the playbook. There is also a deck of 70 cards with the various commands you'll be able to use in your quest for victory, 8 dice, rules, the aforementioned scenario playbook, various player aids and many many sheets of stickers. I admit up front that having terrain tiles rather than separate scenario maps both allows for the very nice mounted map board and ability to create your own scenarios (if you're so inclined) as well as reducing costs for artwork and separate maps. However, I find having to sort and place terrain tiles on the map somewhat of a nuisance; this is one of those uncommon instances where I would actually have preferred individual paper scenario maps like in the Combat Commander series. 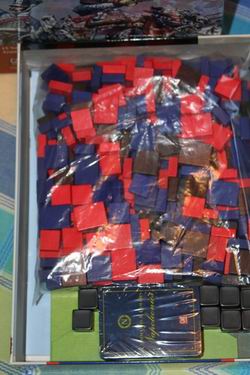 The box is packed full of Napoleonic gaming goodness!

Here's a key difference between the other games in the Borg family and the Commands & Colors (C&C) series (either Ancients or Napoleonics). Whereas Battle Cry et al have plastic miniatures to represent the units, the two C&C series use wooden blocks which require a sticker on both sides (as they'll be upright and visible to both players). The resultant armies are lovely to look at, in many ways easier to sort and store than miniatures, but be prepared my friends to spend literally hours getting your armies all set up. The dice are likewise blank and you have to put stickers on the six faces. There is a guide in the rule book on how to distribute these stickers for those who want specific guidance.

A note about the blocks and stickers: be prepared to devote several hours of painstaking effort to get all your blocks finished on both sides. It took me around four hours to get it all done. 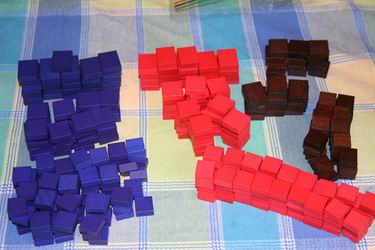 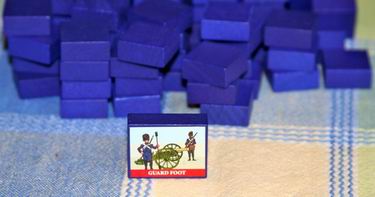 The first stickers are applied! 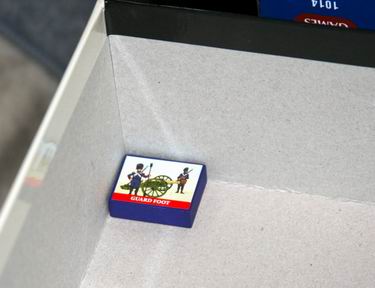 The French army begins its rassemblement. 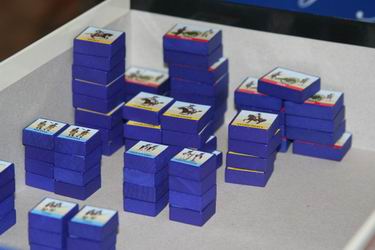 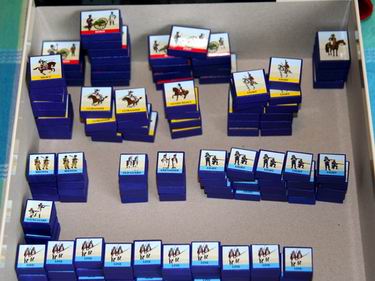 The French army is complete!

Of course, it's not strictly necessary to do all your blocks. You could use one block of each type and sufficient blank blocks to fill the units strength. You could also lay them flat which would only require stickers on one side. So, if you're keen to get playing sooner rather than later, you can use this handy shortcut. Just don't expect that you won't have to eventually get all your blocks finished.

On the right, two alternatives to putting stickers on everything. 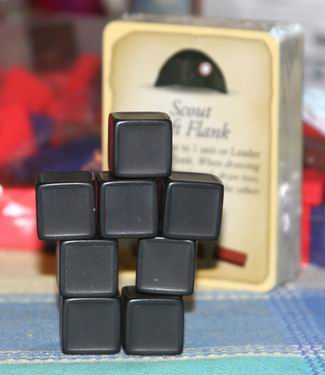 The dice need to have stickers applied too.

A note of caution. that once you get all those stickers on their blocks and the terrain tiles punched out you'll have a Tetris-like challenge getting everything back into the box. Many people resort to external storage solutions for the C&C sets. For instance, my friend Jonathan stores his complete C&C Ancients series in a large Plano tackle box, with all the various armies sorted by type in their own compartments. The organizational effort is well worth it and will pay off time and again for setting up a game. 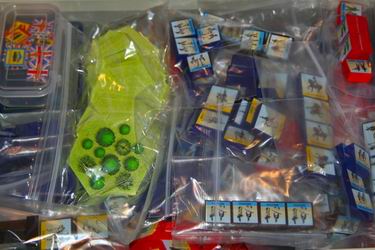 Everything in ziploc baggies. It all fits though!

I see that my future will probably have some Plano storage boxes in it but for the interim, until the expansions all arrive and the organization of the pieces becomes an issue, I'll stick with ziploc bags as they're cheap and everything fits (just!) in the box.

The commands and colors family of games share in common the classic igo-ugo sequence of play. I'll speak about scenarios in a moment, but the gist is that you have a board that's split into three sections representing the left, centre, and right, and you will have units placed in each of these zones. You will also have cards that let you move your units. Some simple examples: 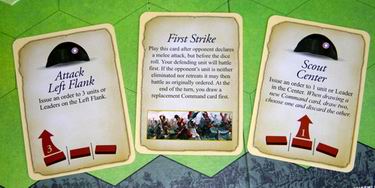 On your turn, you will play one card, select the units you want to move and move them, and then attack with eligible units. Then your opponent goes through the same sequence. This continues until someone wins.

There are essentially three different unit types in the game. Artillery, cavalry, and infantry. Artillery, as one might expect, has good ranged attack and poor mobility, cavalry has good mobility, and infantry has the advantage of being available in great quantity and because they usually have 4 blocks per unit are harder to kill. The game introduces variability in the mix by having unit differentiation within each army. For instance, in the French army alone there are 13 different unit types: 6 different kinds of infantry, 4 kinds of cavalry, and 3 kinds of artillery. To identify unit types at a glance, a color bar is on the bottom of each sticker - blue for infantry, yellow for cavalry and red for artillery. In addition to the three base types of units, each nationality has (generic) leaders that confer bonuses to the unit they're attached with. In addition to these subtypes, it's important to note that light and heavy units respectively have different capabilities in firepower and movement. This is all very nicely detailed in the player handouts. Keeping track of who's who on the board is not terribly hard, but does bear watching! You might want to move your artillery unit and fire it, but foot artillery can only more or fire, while horse artillery can do both.

Combat is quite simple. An eligible unit rolls dice and for every hit, the opponent removes one block from the unit being attacked. Once you've killed the last block in a unit, you get a victory banner. Rolling a flag on a die causes any surviving units to retreat. (I'm perforce oversimplifying for the sake of not getting into a long rules review, but that's the gist of it).

What differentiates C&C:N from the other games in the family is the addition of cavalry mobility ("Cavalry Retire and Reform") and infantry squares. When attacking a unit of infantry with cavalry, before you roll you have to ask if your opponent is going to go into a square. If yes, you randomly take a command card from their hand and place it on a special tableau and an infantry square marker is placed. Infantry in square formation gets a free die to try and bounce the cavalry, and only battles with one die, but the cavalry unit is also limited to one die. Similarly, before attacking cavalry with infantry, you must ask your opponent if they wish to retire and reform. If yes, then the cavalry unit withdraws 2 hexes and is safe from attack this round. 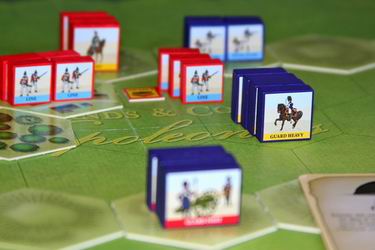 In each scenario victory is determined by winning a certain number of victory banners. You win a victory banner each time you eliminate an opposing unit, and in some scenarios occupying a certain space on the map counts towards you victory banner total for as long as you hold it. Victory is instant - once you have your final one, you win!

The base game comes with fifteen scenarios, and enterprising players could contrive their own. GMT has already announced the Commands & Colors: Napoleonics - The Spanish Army expansion, and the rules indicate that there will be an future volumes to provide both La Grande Battle (sic) scenarios as well as a LGB command deck.

The games of the commands and colors series are intended to be light, fast, and fun and for the most part they all deliver. Between Avalon Hill, Days of Wonder (Memoir '44 and formerly Battlelore), Fantasy Flight (current publishers of Memoir '44, and now Battlelore) and GMT (Commands & Colors: Ancients, and now this), you have a broad range of styles and eras to choose from. If you're looking for more a more realistic portrayal, then you're better off looking for a specific wargame that suits your style as verisimilitude is not a forte of the series.

C&C:N builds on the strength of the commands and colors franchise, so many players will arrive to this game already knowing the basics of how to play. Learning the nuances and details of this system will be fun for most experienced players and easy for new players. As much as I've enjoyed Memoir '44 et al., I've always been more in the camp of these games being light entertainment. However, for me C&C:N stands somewhat apart from its counterparts in this regard. I feel that where this game really shines is that the infantry square/cavalry reform rules provide the flavor of the period better than its cousins.

As much fun as I've had with the commands and colors system to date, Commands & Colors: Napolelonics is my favorite by far. I'll be playing many games of this, and I'm already looking forward to the expansions.

Doctors will have more lives to answer for in the next world than even we generals.~Napoleon