Written by Pascal Dumat on 16 February 2011. Posted in CCN Related

to be used as a memento by an experimented player teaching beginner(s).

These are the very basis of the system to explain before a game with a beginner (or teaching two beginners). This allow to quickly start the game and of course, the different actions will need more detailled explanations during the game, case by case. With basic cards reference for Terrain & Units, plus a Scenario “special for beginner”...
The battlefield game board has three sections by two dotted lines : where the dotted line cuts through a hex, the hex is considered to be part of both sections.

The object of the game

The main object is to be the first to capture a set number of Victory Banners gained for each enemy leader or enemy unit entirely eliminated.

Only infantry and artillery units may engage in ranged combat. The target unit must be within both range and line of sight. A unit adjacent to an enemy unit may not fire on another, more distant, enemy unit.The line of sight is blocked only if a hex between the battling unit and the target contains an obstruction.
Number of battle dice rolled in ranged combat when the infantry unit does not move is equal to the number of blocks in the infantry unit. When an infantry unit moves, the base number of battle dice rolled is equal to 1/2 the number of blocks in the unit, rounding up or down (depends on nationality). An ordered horse artillery unit, which does not move, may target an enemy unit 4 or fewer hexes. In ranged combat, the attacker scores 1 hit for eachtroop symbol rolled that matches the target unit.

A unit attacking an adjacent enemy unit is said to be engaging that enemy unit in melee. In melee combat, the base number of battle dice rolled is equal to the number of blocks in the unit, even if the infantry unit has moved prior to the melee combat.
A horse artillery unit normally rolls 3 dice in melee.
In melee combat, the attacker scores 1 hit for each troop symbol rolled that matches the target unit and 1 hit for each sabers.

A flag does not cause a hit, but may cause the unit to retreat. For each retreat flag rolled against a unit, the unit must move one hex back toward its own side of the battlefield.one block must be removed from the unit for each retreat hex of move that cannot be completed.(Both for ranged or melee combats).

A leader alone in a hex may not be targeted in ranged combat but an unattached leader may be attacked in melee. When a leader is alone in a hex, the attacking enemy unit rolls its normal melee battle dice. One or more saber symbols rolled will score a hit and eliminate the leader. Leaders may move up to 3 hexes.
When a leader is attached to a unit and the unit loses at least one or blocks, or is eliminated, there is a chance that the leader may also be hit. Make a leader casualty check by rolling 2 battle dice. To hit the leader two saber symbols must be rolled. (When the unit is eliminated, the leader casualty check is made with 1 battle dice and a saber symbol must be rolled). If the leader is not hit, the leader must retreat 1, 2, or 3 hexes.

A unit may disregard one flag when a leader is attached to the unit and when supported by two or more friendly units on any hexes that are adjacent to the unit.

When being attacked in melee by an enemy infantry unit, a cavalry unit may choose to Retire and Reform (2 hexes toward its own side of the battlefield) instead of fighting in the melee. The attacking infantry unit rolls the proper number of melee battle dice but only cavalry symbols will score a hit against a cavalry unit electing to Retire and Reform.

Inside this file you will also find detailed charts for both units and terrains. 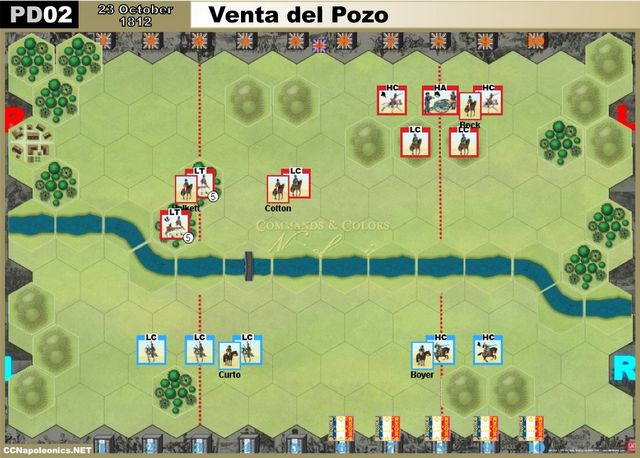 You must not fight too often with one enemy, or you will teach him all your art of war.~Napoleon