The Battle of Mammes 534AD

Historical Background
In 533-534, General Belisarius defeated and destroyed the Vandal Kingdom that existed in the former Roman territories of Northern Africa since 435. After this success, many lands of the old Roman provinces remained in the hands of various Berber tribes, collectively called the Mauri (Moors). Belisarius promised to share the loot of the fallen Vandal Kingdom with them. In return, many Moorish chiefs pledged loyalty to Justinian and the Roman Empire. Belisarius had finished his mission in Africa and left. He was succeeded as Magister Militum Africae by his domesticus, Solomon from Dara. The tribes of Moors living in Byzacena and Numidia almost immediately revolted. Solomon was promoted to the civil office of Praetorian Prefect (governor of the province) and received reinforcements from Justinian to put down the rebellion. With the newly arrived Byzantine troops and with the aid of warriors from other Moorish tribes, Solomon gathered an army of 18,000 and marched towards Byzacena. He reached a location called Mammes where the four Moorish chiefs; Cutzinas, Esdilasas, Lourphouthes, and Mesidinissas had encamped. A battle would soon ensue.

The Moors used a very unique battle tactic they had previously used with success against the Vandals by forming a circle around their camp with their camels. The Moors then took their stand on foot in between the legs of the camels armed with swords, spears, and low-tech shields while some of the Moorish force remained with their horses hidden in the mountain behind their circle. The battle didn’t start well for the Romans. For their horses were disturbed by the noise and sight of the camels reared them up, throwing away their riders. At the same time the Moors attacked hurling spears. Seeing this disorder, Solomon ordered all his men to get off their horses and stand still under the protection of their shields. Solomon himself then led a counter attack with a group of 500 men against part of the enemy circle. They targeted the camels and around 200 were killed. The Moorish defensive circle was breached. The Romans advanced to the center of the circle where the women and children were. The army of the Moors panicked and fled to the mountain. The Romans gave chase and slaughtered more than 10,000. The Battle of Mammes quickly turned into a route of the Moorish forces and was soon over. Solomon and his army returned to Carthage in triumph. 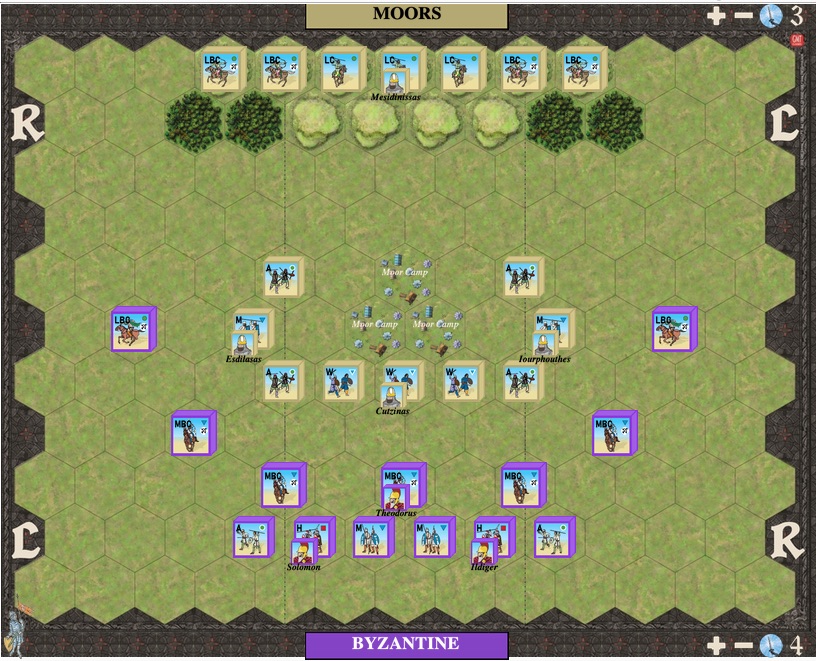 Peterocka41 replied the topic: #515 1 month 1 week ago
Awesome! Thanks to whomever put it in the “maps” section. Seems like it might be more “accessible” to others now? Does not look like anyone has commented on it but it was fun making it. Thanks again.

Mark McG replied the topic: #514 1 month 1 week ago
the other posting happens when the scenario gets created in the Maps section.

The original posting is here
www.commandsandcolors.net/medieval/forum...of-mammes-534ad.html

Peterocka41 replied the topic: #513 1 month 1 week ago
Had not visited the site in a while but decided to pop around it this morning as I pulled C&C back off the shelf for the first time in a little while. I created this scenario & thought I had posted it back in 2019 (I believe) for other to play. Appears it is under another users name now? Curious about any feedback players have on it.
Read More...