When negotiation for peace between Justinian and Kavadh failed in 529 AD, the Sassanid king sent an army towards Dara, while Justinian ordered Belisarius back to the region. Despite being outnumbered 2 to 1, Belisarius deployed outside the city walls and prepared the ground for battle by digging ditches (represented by broken ground in the scenario) to hinder the Sassanid cavalry. On the first day of battle a small Sassanid cavalry force failed to turn the Byzantine right flank.
The second day opened with an exchange of arrow volleys, but after the Sassanid arrow supply was quickly depleted, their dense infantry formation closed with the defending Byzantine infantry. The trench broke the Sassanid forward momentum and neutralized their far greater numbers. Next came a massive Sassanid cavalry attack against the Byzantine left flank. The Byzantines were being pushed back until the Sassanids were successfully counterattacked by Pharas’ cavalry which had been hidden behind the hills. The battle then turned to the Byzantine right. Spearheaded by the elite Sassanid ‘Immortals,’ thousands of mounted Sassanids pushed back the Byzantine right flank. Their advance separated them from the Sassanid infantry in the center. Belisarius was quick to throw much of his reserve cavalry into the gap to attack the exposed Sassanid flank. When the Sassanid cavalry turned to fight their attackers, they were swiftly attacked in flank by Belisarius’s personal cavalry and in the rear by the reformed infantry.
The tightly packed Sassanid cavalry could not maneuver or fight effectively and were slaughtered by the Byzantine counterattack. Over 5,000 perished and the survivors retreated in great disorder. With the Sassanid left flank destroyed, the Byzantine horsemen wasted no time in taking the Sassanid massed infantry in flank. The Sassanid infantry formation dissolved into thousands of panicked individuals running for their lives. The pursuit was short. Belisarius had won a signal victory and did not want to risk having his pursuing troops take losses from a Sassanid counterattack.
The stage is set. The battle lines are drawn and you are in command. Can you change history? 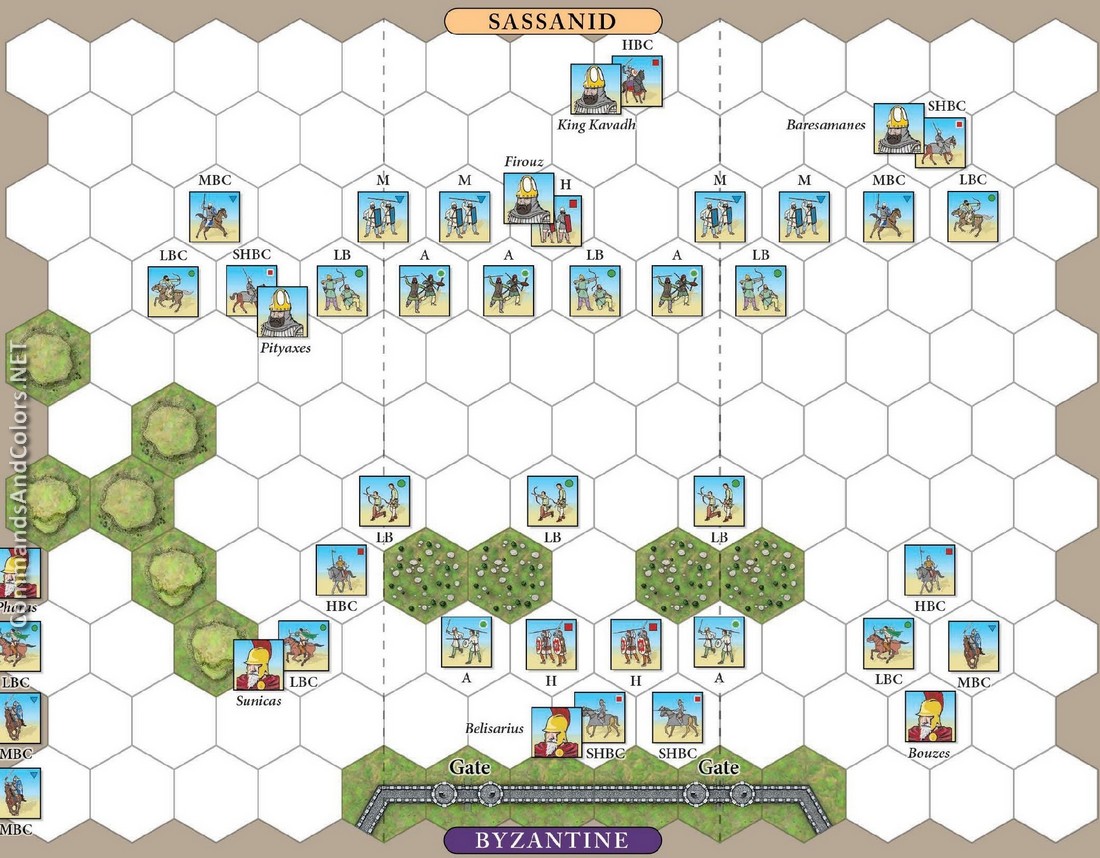 clavain replied the topic: #641 1 year 1 month ago
Further to the last, the gates seem immaterial - they are too far away for the Sassinid really, who can largely keep their distance and use ranged combat to win unless things go very poorly for them. Also, not sure it makes sense for the Byzantine to garrison them even if the Sassanid moves in - my reading of the rules is that killing or forcing a unit on the gate to retreat opens it, so from the Byzantine perspective may be better to die in place in front of the gates, and then have the Sassinids have to force the unoccupied gate by getting a Sword hit, requiring at least two turns of effort.
clavain replied the topic: #640 1 year 1 month ago
7-3 Sassanids. Most of the action was on the flanks as the Sassinid cav advanced. Instead of bringing on the reinforcements, the Byzantine (me) choose to do a mounted charge to counter. Which would have worked great, if the Sassinid had not had two first strike cards, followed by a Rally in his own turn to bring his Superheavies and Heavies back to almost full strength. After that there was a lot of shooting and Darken the Skies, and the Byzantine reinforcements eventually came on but then had no cards to move. The Sassinid wisely stood off and just attrited the Byzantine by archery for the most part, including nailing one leader.
Magmik replied the topic: #607 1 year 9 months ago
Byzantines win 9-3 (finished the round after 7-3)

A couple of doubts:
- Can the units only melee or also fire?
- If they can fire, do we consider they moved or held? (1d or 2d)
- Can you combine with ordering other units already present in the left section?
Read More...

"I have such poor vision I can date anybody."--Garry Shandling