After the battle at Thannuris, Belisarius brought his defeated army back to Dara. Awaiting him were orders from Justinian, the Byzantine emperor, to immediately set out on a mission to construct a fort at Melabasa. Kavadh, king of the Sassanid Empire, had already learned of the plan and ordered Gadar the Qadishite to Melebasa with a strong force to prevent the Byzantines from completing their task. A battle took place on the hills of Melebasa. Belisarius’ weakened and fatigued force was again defeated.
Despite the twin setbacks, Justinian’s confidence in Belisarius remained unshaken. In 529 AD Belisarius was made magister militum per Orientem with instructions to make preparations to invade Persia.
The stage is set. The battle lines are drawn and you are in command. Can you change history? 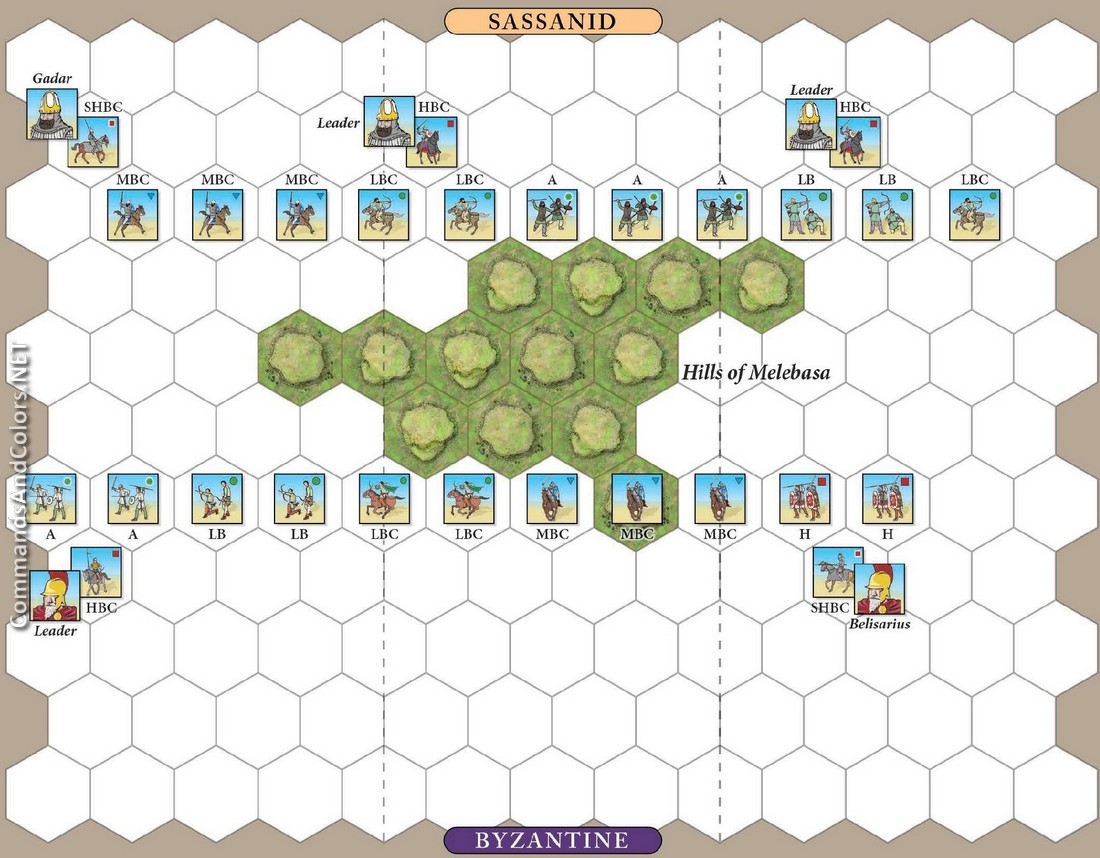 apergis1@verizon.net replied the topic: #754 4 months 6 days ago
My wife and I have played this scenario a half dozen times and it splits 50 50.
We are still experimenting with what are the most effective tactics to use because of the damn hill.

Robin Reeve replied the topic: #698 7 months 3 days ago
Byzanzine victory 6-2.
On the Roman left, some good mix of infantry onslaughts and cavalry encirlement manoeuvers had the best over the Persian medium cavalry.
In the center, the Byzantine cavalry dared to pentrate the hills and, helped by the stature advantage of the horses, smashed the Sassanid Auxiliae.
Byzantines won their first banner by using a Scout card - see scenario special rule.
Even though they lost quite heavily, I think that the Persians had a good chance to win.
I used the CDG Solo system: as CCM works in a quite similar way than CCA, adaptation from the CCA card was easy.
That said, GMT just put on preorder a CDG Solo system II, which will include CCM.
clavain replied the topic: #630 1 year 8 months ago
6-4 Byzantine victory. I was the Sassanids and things started out well with a good flank attack and mounted charge on the Byzantine left. He sacrificed his SHBC to halt it, and I was 4-1 ahead at that point and it looked like his flank was crumbling. At which point I ran out of right flank cards, and he managed to form a semblance of a blocking force with a line command. I then overextended myself on my left flank, and Belisarius managed to cut off two units and then chase down some more, and get a couple of VP with Scout cards. Close and fun game.
Magmik replied the topic: #606 1 year 9 months ago
Byzantines win 6-2

A series of mounted charges by the Byzantines broke the stalemate and forced in first the Sassanid centre, then the Byzantine heavy cavalry on the left flank were released and caused great carnage, ultimately chasing the enemy general Gadar from the field.

Otherwise the other Sassanid generals tried their best to attack, successfully destroying the Byzantine cataphracts, but Belisarious was able to lead his medium cavalry to victory in the centre, killing a Sassanid general in the process.
wilson replied the topic: #208 3 years 4 weeks ago
Game 2 of 3: Sassanids win 6 banners to 1
Absolutely nothing went right for the Byzantines, totally outgunned in command... the Sassanids claimed the high ground, the cavalry drove through the Byzantine left flank, destroying the Heavy Cavalry and killing the General.

Despite map gains by the Byzantines they were chasing dust as the Sassanid cavalry effectively picked off the heavier Byzantine units with ranged fire.

Massive losses inflicted on Byzantine army after the Sassanid cataphracts rallied and caused the final collapse of the Byzantine left flank.
wilson replied the topic: #207 3 years 4 weeks ago
Game 1 of 3: Byzantine win 6 banners to 5
Rapid Sassanid I fantry advance to gain the high ground, however cavalry on Sassanid right flank were surprisingly destroyed.

Belasariua moved heavy units up and personally led the Cataphract charge that destroyed the Sassanid heavy cavalry... at which point the heavier units in the hills started to reduce the Sassanid light infantry.

With no left flank and a buckling centre, Gadar took to the field sweeping all before him and his Cataphracts, including the Byzantine heavy xavalry and killing their general.

Just when it seemed victory had been snatched from defeat the Byzantine centre, lead by the Heavy infantry broke through the Sassanid centre claiming the winning banner.