The defeat at Ad Decimum did not deter Gelimer, and shortly after his brother Tzazon returned from putting down a rebellion in Sardinia, the two marched on Belisarius, who now occupied Carthage. Gathering intelligence from his spies, Gelimer attempted to bribe the Huns in the Byzantine army, but Belisarius learned of the intrigue and made a larger offer. Belisarius knew the Huns felt they had been sent to North Africa after being promised duty closer to their lands and could still be persuaded to change sides. Therefore, Belisarius decided to bring the enemy to battle before any treachery could commence. Count John was sent ahead with the cavalry carrying orders to skirmish until the infantry arrived.
The Huns rode in the rear of the cavalry column and were stationed well away when the Byzantines made camp on the far side of the creek from the Vandal camp. The next day Gelimer led out his army and deployed for battle. John stationed himself with the center division and crossed the small stream with small contingents and skirmished several times, but each time had to retreat from larger Vandal pursuit forces. For their part the Vandals would not pursue John across the stream. Instead they would stop at the bank and retire. Tzazon and several other Vandal nobles had perished in these skirmishes, and the Vandal army was starting to lose heart. When Belisarius arrived and assessed the situation, he changed his mind and ordered the entire cavalry force to attack without waiting for the infantry. The Vandals, now in disarray, were pursued back to their camp.
The Huns waited to see which side won and joined the Byzantines in pursuing the Vandals. Belisarius waited for his infantry to arrive before moving on the Vandal camp. Gelimer, seeing the camp being surrounded, escaped to the mountains.
The stage is set. The battle lines are drawn and you are in command. Can you change history? 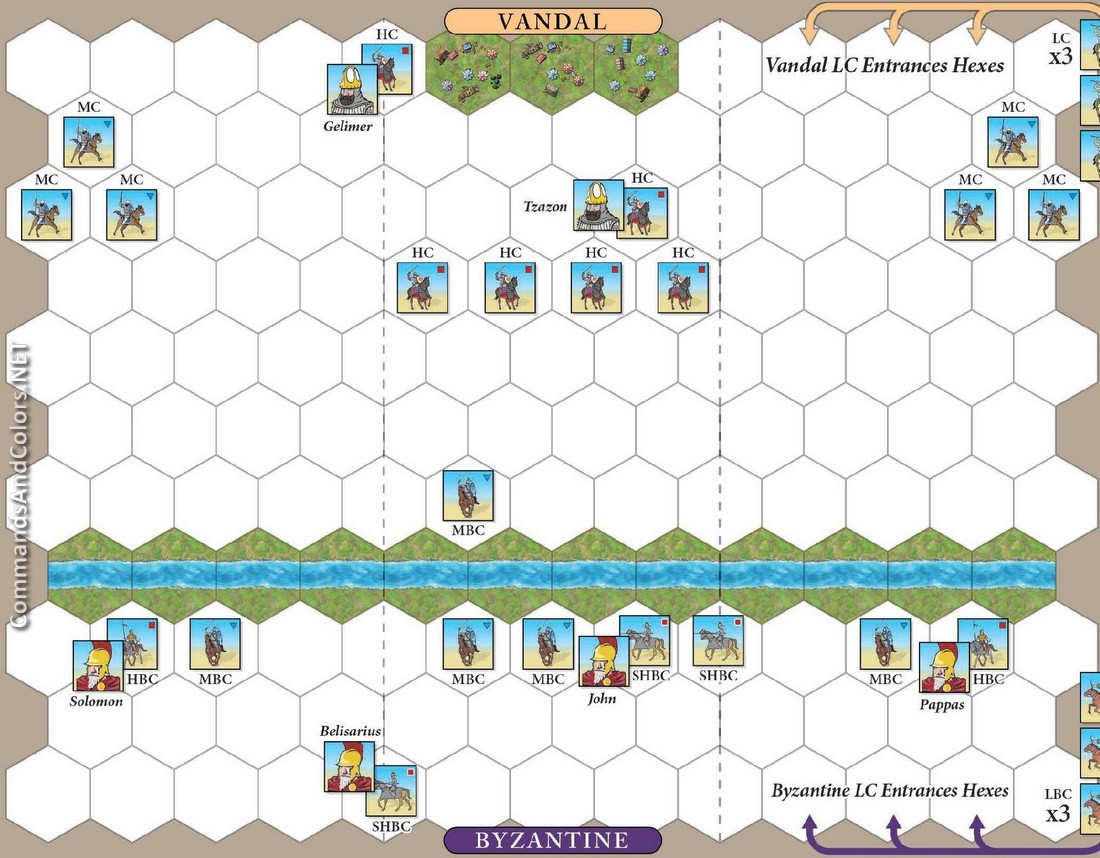 Mark McG replied the topic: #281 10 months 4 days ago
no, but I think now that there are 2 groups, Huns and Moors, and that they arrive independently.
Not sure that is the historical version, but makes sense in the rules.

the rule implies there are two groups of reinforcements, Huns and Moors, and that each side receives those reinforcements when they reach 3 banners, yet the history is there is one group of Huns that don't commit until the winner is determined.

Assuming 1 group, if both players achieve 3 banners in the same action phase, who gets the reinforcements? The first to 3 banners, or the first to start a turn?

Mark McG replied the topic: #159 1 year 2 months ago
Wonder why the Moors/Huns are armed with bows for the Byzantines, but no bows for the Vandals?
They were the same troops, standing aside to see who would win before committing.
Read More...

"I had a linguistics professor who said that it's man's ability to use language that makes him the dominant species on the planet. That may be. But I think there's one other thing that separates us from animals -- we aren't afraid of vacuum cleaners."--Jeff Stilson