The successes in the repeated cavalry raids against the besieging Goths greatly encouraged the Byzantine army and the people of Rome, who now put pressure on Belisarius to march forth into an open battle. At first, Belisarius refused because of the still-great numerical disparity, but was at length persuaded, and made his preparations accordingly. The main force, under his command, would sally forth from the Pincian and the Salarian Gates in the north, while a smaller cavalry detachment under Valentinus, along with the bulk of the armed civilians, would confront the large Gothic force encamped west of the Tiber and prevent them from participating in the battle, without however engaging it in direct combat. Initially, because of the poor quality of the Roman infantry, Belisarius wished the battle to be restricted to a cavalry fight, but was persuaded by the pleas of two of his bodyguards, Principius and Tarmutus, and positioned a large body of his infantry under them as a reserve and rally point for the cavalry. Vitiges, for his part, deployed his army in the typical fashion, with the infantry in the center and the cavalry on the flanks. The Roman cavalry once again utilized its familiar tactics, showering the dense mass of Gothic troops with arrows and withdrawing without contact. Thus they inflicted great casualties on the Goths, who were unable to adapt to these tactics, and by midday, the Romans seemed close to victory. On the Fields of Nero, on the other side of the Tiber, the Romans attempted a sudden attack on the Goths, and, due to shock and large numbers, the Goths were routed and fled to the hills for safety. But the majority of the Roman army there, as mentioned, consisted of ill-disciplined civilians, who soon lost any semblance of order, despite Valentinus' and his officers' efforts, and went about plundering the abandoned Gothic camp. This confusion gave the Goths the time to regroup, and charging once again, they drove the Romans back with great loss. In the meantime, on the eastern side of the Tiber, the Romans had reached the Gothic camps. There, resistance was fierce, and the already small Roman force suffered casualties in close combat. Thus, when the Gothic cavalry in the right-wing perceived their opponents' weakness, they moved against them and routed them. Soon the Romans were in full flight, and the infantry, which was supposed to act in exactly such a case as a defensive screen, disintegrated despite the valor of Principius and Tarmutus and joined the flight for the safety of the walls. 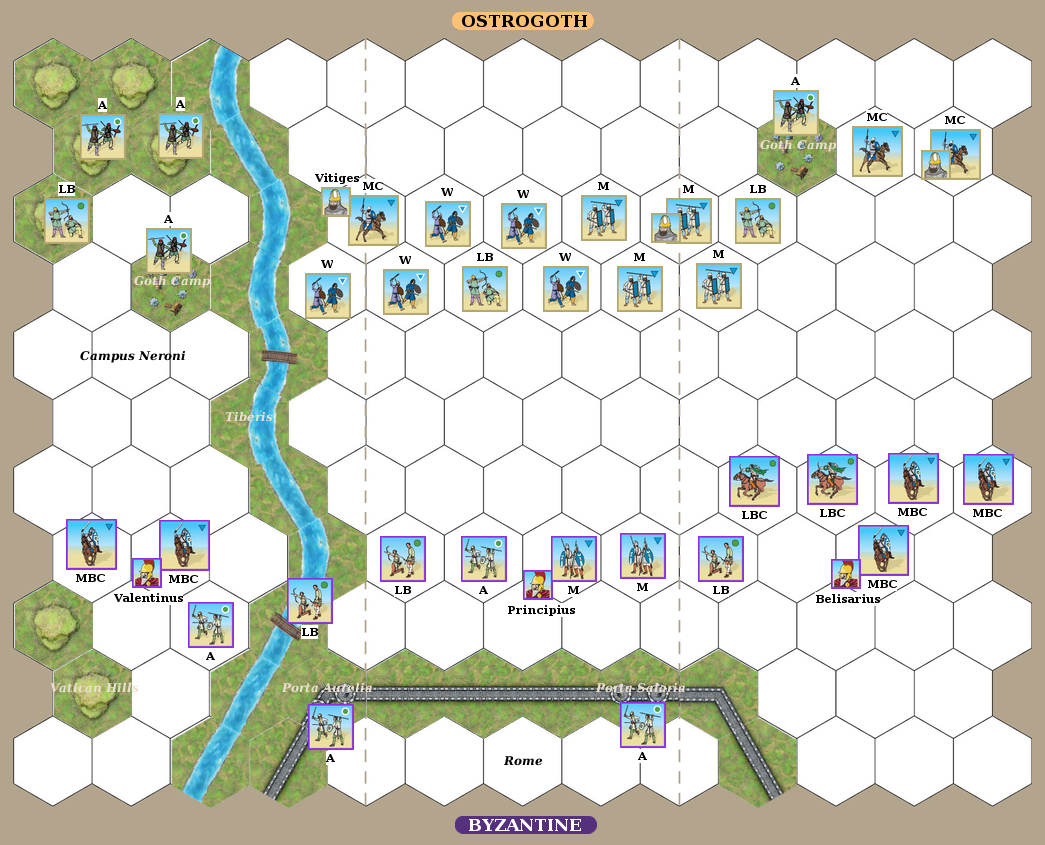 Special Rules
• The Byzantine Medium Cavalry units are armed with bows.
• The river is impassable.
• The first time a Byzantine unit occupies a Goth Camp at the start of the Byzantine turn, the Byzantine player gains 1 Permanent Victory Banner. Only one banner can be earned in this way.

Discuss this article
Log in to comment
Posts in discussion: GI06 Open Battle at the Siege of Rome 537AD

Played with Mark. As he said, it was a "brawl" between cavalry and infantry in front of the city walls, ultimately won by the better dice rolls.

Played with Alessio. The Ostrogoth advance strong in the center and gain some banners. Precious and the Roman infantry are pushed against the city walls. Belisarius with the Byzantine cavalry arrives from the right flank and despite being heavily damaged, saves the day.
Read More...