Less More
2 months 4 days ago #165 by Mark McG
Crecy 1346 was created by Mark McG
Battle of Crecy
August 26, 1346
Although out-numbered, the English held a strong defensive position with King Edward's longbowmen deployed along the crest of the hill. The first attack was delivered by King Philip's Genoese crossbow troops, followed quickly by the French Men-at-Arms. Thrown into confusion by the superior rate of fire of the English longbows, they soon retreated.
Seeing the crossbow troops in disarray, the French cavalry charged. A curtain of arrows filled the sky and the French were repelled. Over and over, they tried and failed to break the English position that day.
By nightfall, exhausted and suffering from massive casualties, the French retired from the battlefield. 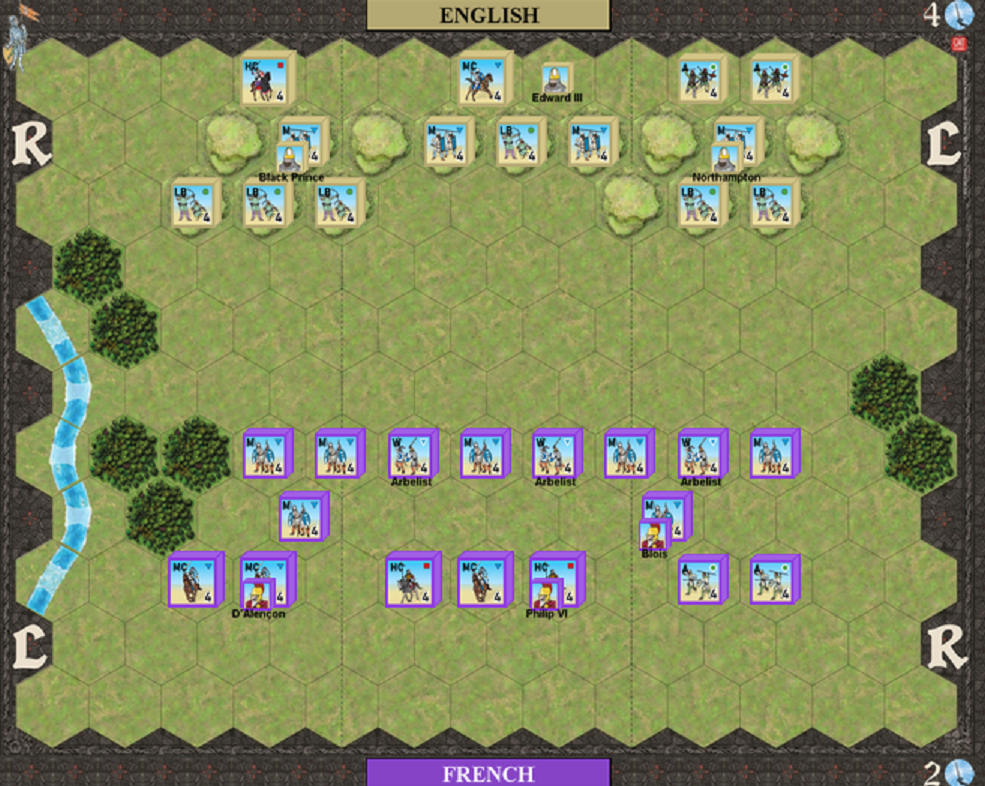 Special Rules
- The River Maye is a fordable river.
- Auxilia units roll 1 die for each hex retreated. On a green they lose a figure.
- All Archer units are Long Bow units. Long Bows hit on Swords using ranged combat.
- All Warrior units are Arbalists. Treat as Medium Infantry with a 3d ranged attack (1d if moved)
Arbalist have range of 3, and hit on Swords with a ranged attack.

Less More
2 months 4 days ago - 2 months 4 days ago #166 by Mark McG
Replied by Mark McG on topic Crecy 1346
This is pretty much a straight up conversion of the BattleLore scenario, complete with two vacant rows at the bottom.
Conversion of the BattleLore units to Medieval was pretty much a straight switch with the exception of the Arbelists. These crossbowmen fire 3d at up to 3 range, hitting on swords on ranged fire (but not Melee).
Although I used the Warrior unit to indicate the unit, they should in no way be treated as anything but Medium Infantry with a great ranged fire option, and do not hit on swords in melee combat.

All bows are longbows, and hit on Swords in ranged fire.

I've played this scenario in BattleLore, and the English with a Darken the Sky card are a fearful thing. My playtest of this scenario was nowhere near as remarkable, but more a tough struggle at the hill flanks.

Interested in any comments on whether the BattleLore scenarios transfer effectively, or whether more conversion should take place. For example, using the vacant 2 rows and setting the French back a little so they can choose their own assault forces more carefully.
Last edit: 2 months 4 days ago by Mark McG.

straight out of BattleLore
to be honest, I'd rather Longbows hit on Swords vs cavalry only. Focus on their primary use, and distinguish them from Crossbows/Arbalests, which had an evil reputation for armour piercing.

"I ask people why they have deer heads on their walls. They always say because it's such a beautiful animal. There you go. I think my mother is attractive, but I have photographs of her."--Ellen DeGeneres