Select one of the 30 battle scenarios from the Scenarios section, starting on page 17. Each scenario includes a battlefield map, a brief overview of the battle, and staffing notes.
The 30 scenarios are based on actual Civil War battles. Every attempt has been made to ensure accuracy, within the boundaries of the game system. Keep in mind, however, that history is, by definition, interpretive. “Facts” are often contradictory. Press and government reports are not always accurate. Historians, sometimes disagree. People are misquoted. Embellishment, mistakes, faulty memories and conflicting records also play a role. In war, nothing is certain.

If this is your first game of Battle Cry, start with the First Bull Run scenario on page 17.
This scenario will help you become familiar with the rules and the basics of fighting a Civil War battle.

Set up the Game Board

Each scenario has a battlefield map that shows where to deploy armies and place terrain tiles and tokens on the game board.
Set up the game board according to the map.

Each silhouette on the map represents either a single general figure or a unit comprised of multiple troop figures. 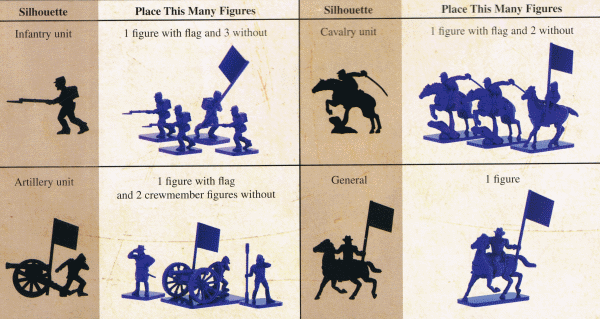 A Note on Scale The number of historical forces represented by a game unit varies by scenario. For example, in some scenarios an infantry unit in the game may represent an entire division, while in other scenarios it might represent a single regiment.

Terrain has a variety of effects as described in the Terrain section on page 12 and on the quick-reference sheet.
Click here for further terrain reference.

Special Unit: When you move a special unit, move the corresponding token along with it. The token doesn’t count as a piece that can be removed to satisfy losses, and the token is not transferable. Remove the token from the battlefield when the last piece in the special unit is eliminated.
Objective Hex: Place a flag token on the objective hex. Normally when your unit occupies an objective hex, you capture the flag token and place it on your victory stand.

Each scenario includes staffing notes with information on the following:
The generals in command. In some scenarios, the generals aren’t present on the battlefield; only the field officers whose presence affected the actual outcome of the battle are represented.
Each player’s hand size of command cards.
The player who goes first.
The number of captured flags needed to win the game.
Any special rules or victory conditions that apply.
When a battle’s special rules require a unit to occupy an objective hex to earn a victory flag token, a general figure by itself can’t capture that objective hex; only an infantry, cavalry or artillery unit can capture a victory flag token.

Shuffle the command cards and deal the number of cards shown in the staffing notes to each player. Players keep their cards secret. Place the remaining cards face down in a draw pile, within easy reach of both players.