Historical Overview
The battle of Goito (near Mantova) was the most significant Piedmontese victory in the First Italian War of Indipendence.
The Piedmontese army advanced across Lombardy, brushing aside the covering forces under Austrian units guarding the bridge over the Mincio at Goito during an engagement on 9 April 1848.The Austrians tried but failed to destroy the Goito bridge and, once across the Mincio, the Piedmontese forces (Bersaglieri new elite unit!) fanned out towards the north and south for some kilometres.
On 10 April 1848, the Piedmontese army started a siege to blockade the fortress of Peschiera: the Austrians surrendered the fortress on 29 May 1848, just one day prior to the battle of Goito. Field marshal Radetzky decided to concentrate his forces against the bigger Piedmontese concentration of men near Mincio. On 28 May 1848, he marched his army towards Mantua and engaged and defeated the Italian forces (Tuscan and Neapolitan volunteers) at the battle of curtatone anf Montnara on 29 May 1848. Now both the Piedmontese and the Austrian armies were concentrated on the same Mincio side of the Quadrilatero: the Piedmontese south of Peschiera, the Austrians in control of Mantua. From Mantua, Radetzky sent his First and Reserve Corps towards Goito, while his Second Corps and the cavalry were ordered to reconnoiter towards Rodigo, in reality in a very long outflanking maneuver for Ceresara.
The Piedmontese forces were deployed in two lines. The first line stretched from the banks of the Mincio at Goito westwards. The second line occupied heights above Goito. At around 14:00 on 30 May 1848, the cavalry vedettes of both sides established contact. Brigade Benedek leading First Corps advanced from Sacca towards Goito, coming under artillery fire from the Italian guns on the 'Somenzari' heights at 15:30. So Brigade Benedek remained pinned out of Goito; meanwhile Brigades Wohlgemuth and Strassoldo advanced on his left, brushing aside the opposition of Cuneo brigade. To stem the Austrian progress, General Bava sent forward two Cavalry Corps and Aosta Brigade (on the center and left side) at 17:00. Also Vittorio Emanuele, the heir to the Piedmontese throne, led the Guards Brigade (the last reserve) towards the opposite: that march intercepted the flight of Cuneo Brigade, who was arrested and reorganized. The two brigades counterattacked the center and the left wing of Austrian Army and pushed them back off by a bayonet charge. Also Brigade of Benedek retired too when it was countrattacked by Neapolitan reinforcements of 'Abruzzo' Brigade went out from Goito's area. At 19:00, both sides withdrew to their initial positions.
The stage is set, the battle lines are drawn, and you are in command. The rest is history. 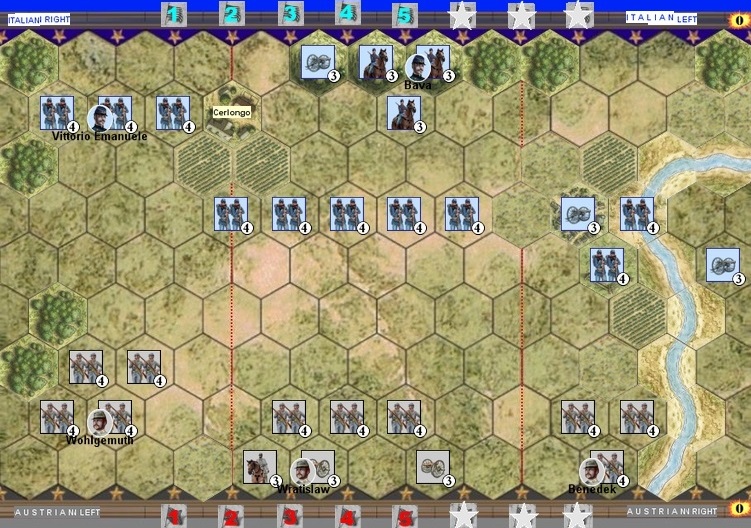 Victory
5 Banners
The hexes of the town of Goito and of the bridge over the River Mincio are Temporary Medal Objectives for the Austrian Forces.

Special Rules
- Mincio river can be crossed only at the bridge. No units may move or retreat onto a river hex tile.

- When Prince Vittorio Emanuele is attached to a unit will add one battle dice when this unit is battling.