Historical Overview
After the Mille (the 'Thousand') had landed at Marsala, on May 14 Garibaldi announced that he was assuming dictatorship over Sicily at Salemi. The General staff of Kingdom of the Two Sicilies Army in Palermo ordered the General Landi, headquartered in Alcamo, to meet the invaders. Landi left Alcamo with three infantry battalions (also Cacciatori and Carabinieri units) with around 2,500-3,000 men.
He also had a little force of cavalry and some artillery. General Landi was ordered to prevent popular insurrections and he arrived at Calatafimi early on 13 May. When he learnt that Garibaldi was marching towards him on 15 May Landi spread his troops around, posting the 8th Cacciatori on a hill called Pianto dei Romani. Garibaldi's men left Salemi on the dawn of 15 May, and in the morning reached little village of Vita and then they stopped at Monte Pietrolunga, on the opposite side of a steep valley from the Neapolitan 8th Cacciatori. Garibaldi planned to attack the Neapolitan position, but he was pre-empted by Major Sforza, commander of the 8th Cacciatori. Sforza decided to attack the ragged band he saw on the opposite hillside and ordered his men to advance down into the valley. The battle thus began as a clash between the advancing 8th Cacciatori and Garibaldi's skirmish line. Garibaldi's leading companies then charged into the battle (without direct orders to do so). The Neapolitan skirmishes pulled back to join the rest of their battalion, and took up a strong defensive position on the terraced hillside. The Neapolitans were better armed than Garibaldini with modern rifles. The battle thus turned into a series of bayonet charges by the Thousand, with the Neapolitans retreating to the next terrace if a charge got too close to their position. After several hours of fighting the Neapolitans were pushed back to the top of the hill and Garibaldi's men captured a cannon on the left of the Neapolitan line. As Garibaldi prepared for a last desperate attack on the enemy line it became clear that the Neapolitans were running short of ammunition. Encouraged by this Garibaldi led a final charge, and the Neapolitans were forced into a retreat. Both sides suffered similar losses at Calatafimi: Garibaldi lost 30 dead, 100 eriously wounded; the Neapolitan losses were probably similar in scale. They suffered more losses during their retreat, for continuous ambushes, especially in Partinico, and when they arrived at Palermo on 17 May were in a terrible state.
- http://www.historyofwar.org/articles/battles_volturno.html
- Giuseppe Bandi, I Mille da Genova a Capua, Firenze 1903
- Marco Scardigli, Le grandi battaglie del Risorgimento, Milano 2010
- Andrea Marrone, I Mille. La battaglia finale, Roma 2012
The stage is set, the battle lines are drawn, and you are in command. The rest is history. 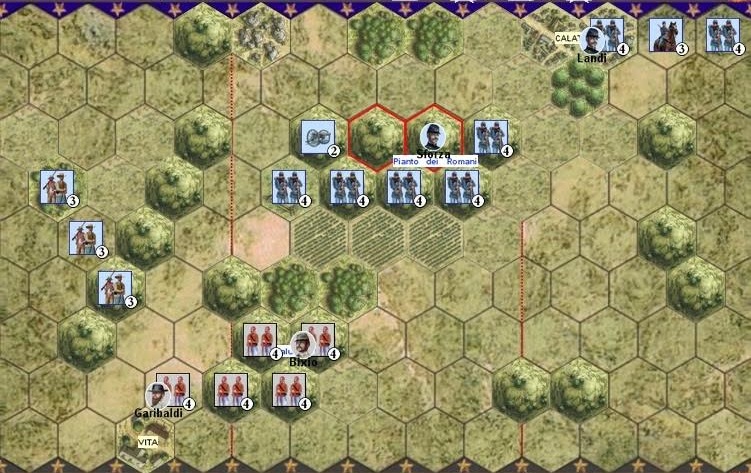 In this battle Garibaldi displayed incredible force of personality, so it's realistic to give him the highest leadership ratings possible: when Garibaldi is attached to a unit will add one battle dice when this unit is battling.

All the Neapolitan infantry units are “green” units. Green units must retreat 2 hexes when forced to retreat.

The Neapolitan artillery unit on Pianto dei Romani is only an half battery so it starts with 2 miniature instead if three.

The Neapolitan units in reserve under Commander Landi remained in Calatafimi and took no part in the skirmish, Major Sforza commanded the only active half of the Neapolitan force during the battle. On the other side, hundreds of Sicilian 'Picciotti' could have helped Redshirts but they preferred to wait the outcome of the battle on the hills. So, these forces can be used to balance out the scenario, along with the Neapolitan reserve: players can use them only after the fourth "Draw a Command Card" phase.

Because of low quality of military experience and for poor quality of individual weapons, the three Sicilian Picciotti infantry units on the left side of Garibaldi start the battle with only 3 pieces.