The following campaign is intended for two players who take opposite sides and play seven subsequent scenarios featuring Romans against different Barbarian foes. The Roman player plays all scenarios taking the Roman side. The Barbarian player plays all scenarios taking the enemies of Rome, in turn, Helvetii, Germanic Tribes, Belgian Tribes, Gauls, and Britons. The winner of the campaign is decided by the difference in the total number of banners scored by the two players in all played scenarios. Scenarios are played according to their original rules, with no modification. Thus, it is possible that in one specific scenario one side is favored.
Scenarios unbalance, however, is accounted for in the final scoring. The list of scenarios is reported in the table below.
For ease of reference and following a widespread custom, they are indicated with a three digit number, the first digit referring to the expansion and the remaining two digits to the progressive position of the scenario in the scenario book of that expansion. Use the table to score the results of each scenario.

Optional: For a longer campaign, play 308 Gergovia (52 BC) as a last additional battle. Add the banners won by the two factions to the previous total, take the difference and subtract two, then look up the result in the table above.

CREDITS
I want to thank Daniele for his precious advice and the many hours spent testing this campaign. The final result table is based on scenario statistics found in www.commandsandcolors.net, built from hundreds of reports by tenths of different players. This campaign is dedicated to them. 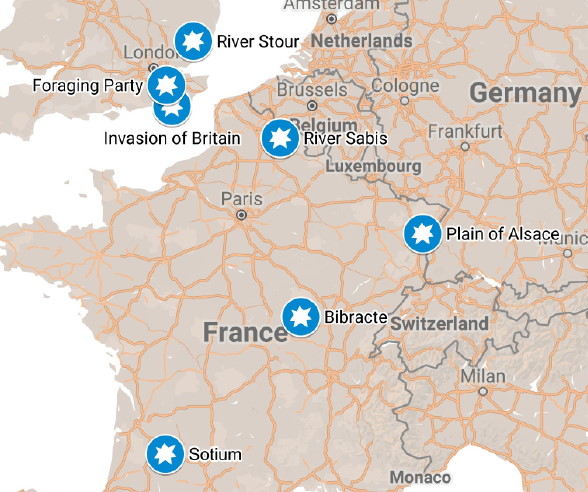