Written by Administrator. Posted in Base Game 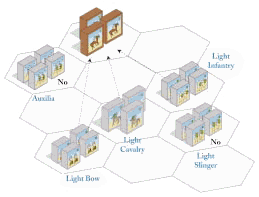 EXAMPLE OF RANGED COMBAT: The auxilia unit may not fire because it is adjacent to an enemy unit. The light bow unit fires at a range of three hexes, while the light cavalry and light infantry unit have a range of two. The light slinger unit may not fire because its LOS is blocked by friendly units. Assuming none of the units have moved, they would each get two dice to use in Ranged Combat. Note that the light cavalry unit could have moved four hexes and still fire in its turn (although it would only fire with one die instead of two).

Announce the ordered unit you want to fire with, and its target unit.

Verify that your target is within line of sight. A unit must be able to ‘see’ the enemy unit it wants to fire at. This is known as having ‘line of sight’.
Imagine a line drawn from the center of the hex containing the firing unit to the center of the hex containing the target unit.
This line of sight is blocked only if a hex (or part of a hex) between the battling unit and the target hex contains an obstruction.
Obstructions include a unit or leader (regardless if friend or foe), some terrain features and the edge of the battlefield. The terrain in the target unit’s hex does not block line of sight.
If the imaginary line runs along the edge of one or more hexes that contain obstructions, line of sight is not blocked unless the obstructions are on both sides of the line.

Reduce the number of battle dice rolled accordingly. Terrain battle dice reductions are described in the section on Terrain.

roll battle dice and resolve resulting dice rolls.
The number of dice rolled depends upon whether or not the unit held its position (did not move) before firing. If the unit did not move prior to firing it may use 2 dice in Ranged Combat; if it moved, it may only use 1 die.

In Ranged Combat, the unit firing scores 1 hit for each dice symbol rolled that matches the unit type targeted.

A flag does not score a hit but may cause the unit to retreat (see Retreat).

If the attacking unit rolls a leader symbol (leaders affect Close Combat but not Ranged Combat), sword symbol, or a unit symbol that does not match the target unit, the Ranged Combat has missed its target and has no effect.

Effect of Range Combat hits on Units: For each hit scored, 1 block is removed from the target unit. When the last block in the opponent’s unit is removed, you collect a Victory Banner block. If a player rolls more hits than the number of pieces in the enemy unit, these additional hits have no effect.