Historical Background
Following two years of successful campaigning, Caesar believed he had pacified southern and western Gaul and left for Illyria. Sensing an opportunity, the Veneti and neighboring tribes on the Atlantic coast rebelled. These coastal tribes had their own navy, so when Caesar returned, he had a Roman fleet built to subdue them. The Roman fleet won a decisive victory at Morbihan Bay. Meanwhile, to defeat the rebellion on land, Caesar detailed Publius Crassus (son of the great Marcus Licinius Crassus) to Aquitania to subdue the Sotiates, so that they could not aid the Veneti. Adiatuanos, the King of the Sotiates, levied a large army, particularly strong in cavalry. When Crassus was marching through their territory, he was attacked while still in column of march. Adiatuanos first attacked with his cavalry. When they were repulsed, his concealed foot soldiers fell on the Roman column. Only after a fierce struggle did the Sotiates break and flee back to the town of Sotium. Crassus besieged the town and Adiatuanos and the inhabitants soon capitulated.
The stage is set. The battle lines are drawn and you are in command. The rest is history. 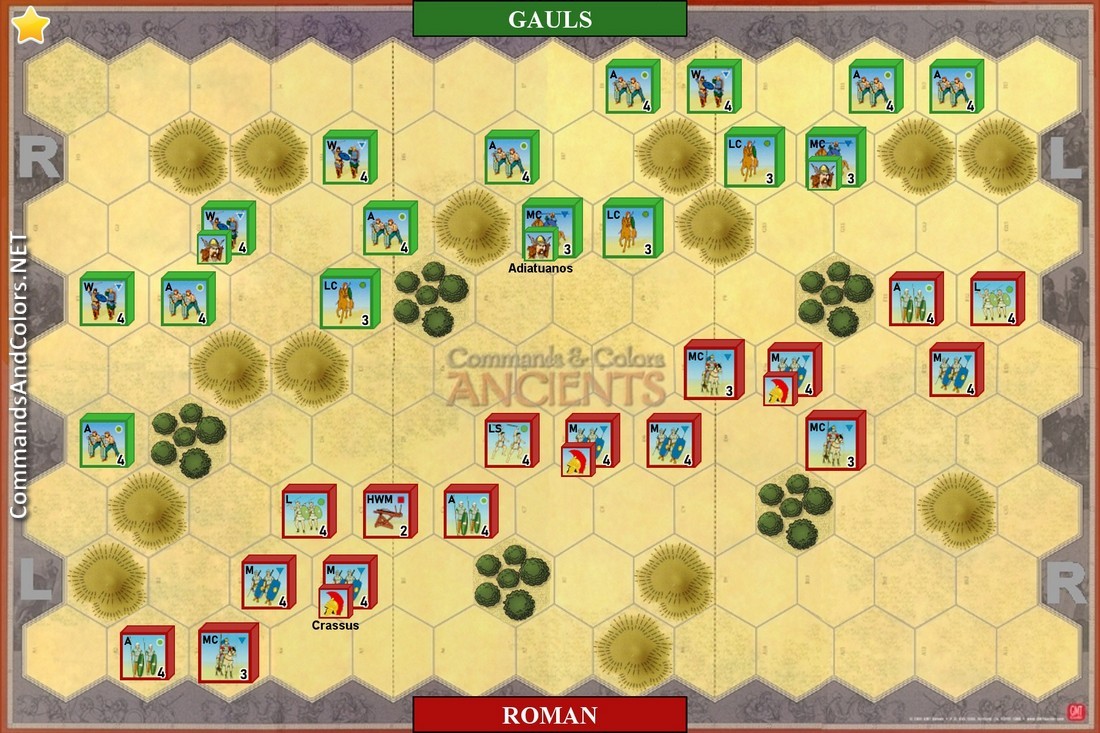 Game 1: Dad counter attacks Gary's I AM SPARTICUS to take game 1. Rome 6 - 4 Gaul
Game 2: Double Time surrounds a Roman Medium Infantry unit and they are whittled down for a Barbarian victory. Gauls 6 - 3 Rome.
Pevans replied the topic: #4013 1 year 6 months ago
It's been a while since I played Ancients and this was my first foray into Expansion 2. My opponent, Deon, was a bit rusty, too. He plumped for the Gauls, letting me take the Romans.
As the Gauls moved troops forward, the Romans opened fire on enemy units already in range. The only success was the Heavy War Machine forcing a Gaulish Light cavalry to retreat.
Then the Gauls' cavalry on their left flank attacked the exposed Roman Medium cavalry unit. The Romans gave as good as they got, battering both attacking units even as they were battered themselves. A full strength Medium cavalry moved into counter-attack, only for the Gaulish Light cavalry to retire unharmed. The damaged Roman Medium cavalry joined in but were eliminated by their equally damaged opposite numbers. (Making the score 0:1 to the Gauls)
Led by Adiatuanos, The Gaulish cavalry from the centre, plus a Warrior unit, now attacked the Roman line in the centre. The Light cavalry was wiped out by the Medium infantry it picked on, while a Medium cavalry battle saw the Gaulish unit destroyed, Adiatuanos making his escape. (Suddenly it's 2:1 to the Romans)
The Roman infantry on their right flank surged forward [Double Time card] onto the hills to attack the Auxilia units behind them. One Auxilia fell immediately with no casualties amongst the Romans. (3:1)
The Gaulish Medium cavalry and Warriors swung round from the centre to attack the advanced Roman force in the flank. The effect was devastating, destroying the two Medium infantry units [4 dice, 4 hits, pah! Twice!!] to leave the Roman force as an Auxilia and a Light. Even worse, the Roman leader fell with his men. (3:4)
A full strength Roman Medium cavalry unit took on the battered Gaulish Medium cavalry, now hiding in the woods on the Roman right flank, but came off worse. Clever manoeuvring by the Gaulish cavalry let them finish off their Roman equivalents. (3:5)
With just the two units left on their left flank, the Romans tried to take out one of the two facing them. They failed to cause any casualties, took a battering in return, and the following attack by the Gauls killed the Roman Auxilia. (3:6 and a clear win for the Gauls)
Deon's lucky dice rolls swung the battle at a crucial point, but I definitely need more practice. Expect a return match in the near future.
Read More...