Caesar Against The Nervii
The Battle of the Sabis 57 BC 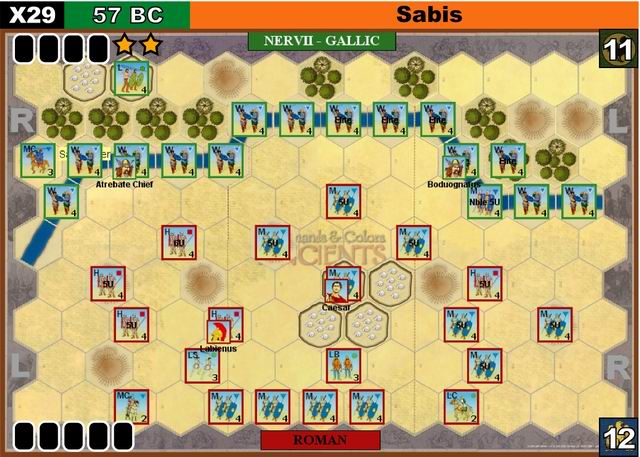 Banners & Victory
The Romans receive one banner for each Gallic unit and Leader eliminated and one Banner for each Gallic Camp hex removed from the map via Roman entry. The Gauls receive one banner for each Roman legionary (Medium or Heavy Infantry unit) and leader eliminated and half a banner for eliminating any other Roman unit. They also receive two banners in lieu of one if they manage to eliminate Caesar and two banners if they remove at least three of the four Roman Camp tiles via the entry of Gallic units. Victory for the Roman side is: 12 Banners—for the Gallic side 11 Banners.

The “Marian” Command Card Deck
Historical Note: Combat in the 1st Century BC along the Roman frontier was somewhat different than the wars between civilized states in the 3rd Century BC. There was less room for combined arms tactics and maneuver, and battles probably tended to be more of the nature of hand to hand full bore slugfests with the stakes being nothing less than the survival of the tribe or Legion.
This particular scenario utilizes a different Command Card Deck than the original C & C Ancients Deck. Eight (8) Cards are removed from the original deck leaving 52 Cards for scenario play. This new deck is called the “Marian Deck” and it is named after Caesar’s uncle Gaius Marius who reorganized the Roman Legions in roughly 105-103BC (several years before Caesar was born) to meet the challenges of the Germanic Tribal invasions that threatened the Roman Republic of the time.
The following eight cards are removed before play and put aside to create the Marian Deck:
X4 “Order Light troops”, x1 “I Am Spartacus”, x2 “Move-Fire-Move”, x1 “Mounted Charge”---note that one Mounted Charge” card is still retained in the deck.
Leader Command, Caesar, & Rally Special Rules:
Caesar can cancel both a retreat and a sword hit if present with the unit receiving such hits.
Units on both sides involved in close combat with the support of a Leader may only count one helmet hit amongst those rolled to inflict a hit on an opposing unit, unless Caesar is the supporting leader---than up to two helmet hits may be counted
Caesar when moving & ordered by himself without an attached unit normally may move up to four hexes instead of the regular three hexes for Leaders in the rulebook.
Roman and Gallic units and the Rally Card: No Gallic unit can be rallied to beyond four blocks or its strength at the start of the game whichever is less. No Roman unit can be rallied to beyond five blocks or its strength at the start of the game whichever is less. If a Player rolls “swords” when attempting to rally he may freely chose which unit gets a block back.

Gallic Special Rules & Units:
Gallic Elite Warriors: All Gallic medium infantry units are treated as Warriors for all purposes, they are Elite Warriors—in addition they receive one extra dice the very first time in the scenario they battle back or engage in close combat as long as the unit still has three or more blocks at the instant it rolls in either combat or battle-back.
Gallic Noble Warriors: The sole Gallic Noble Warrior unit (represented by Medium Infantry) is considered to be made up of the top cream of Nervii tribal warrior society. It starts the game with five blocks and receives the same one dice- one time bonus as the Elite Warriors—in addition if still at four or more blocks it also receives the same benefits as a regular warrior unit (ignoring one flag and getting four dice normally).
Gallic Line Commands: The maximum number of units the Gallic player may move/order with a Line Command Card is five units.
“Barbarian Rush”: Limits to Gallic Momentum Combat: Gallic Warrior units, regardless of type, reduced to one or two blocks May Not Engage in momentum combat unless a friendly leader is attached to the unit in question.
Gallic Tribes: The Gallic Leader that starts in hex G3 (the Atrebate Chief) may never end a move or evasion in a hex containing a Gallic Noble or Elite Warrior unit. The Gallic Leader that starts in hex G10 (Boduognatus the Nervii Chief) may never end a move or evasion in a hex containing a Gallic Warrior unit that is not also an Elite or Noble one.
“Barbarian Balk”: If a Gallic Warrior unit (of whatever type) moves 2 hexes (or 3 hexes using “Double Time”) to a hex adjacent to a Roman unit(s) to close combat it and then is unable to do so due to the Roman unit(s) being retreated or eliminated by other Gallic attacks, the Gallic unit has failed its requirement to close-combat attack given the length of its pre-combat move.
Such units that fail to attack are said to have “balked”—immediately retreat Warrior units in such a situation one hex once all Gallic close combats are finished. The one hex “Barbarian Balk” retreat is conducted in the normal fashion just as if the unit was forced to retreat one hex after a battle—and it is not optional and cannot be canceled in any way—even by the presence of a leader.

Roman Special Rules & Units:
Roman Pilum:
Each Roman Heavy & Medium Infantry unit starts with a Pilum Marker. The Pilum is a one-time use weapon that is generally fired right before a Roman unit attacks in close-combat or is itself attacked by the enemy in close-combat. Once the pilum is fired (or lost see below) –the Pilum marker is removed from the Roman unit to indicate that the pilum has been expended and the unit may not throw Pilum for the rest of the battle.
Just before a Roman unit with pilum is attacked or is itself attacked by the enemy for the very first time in the battle in close-combat it throws its pilum—roll one die and apply normal hits for the color, swords, or a Flag/retreat hit Afterwards remove the Pilum marker. The act of throwing the pilum is not considered to be part of the Close-Combat—so any result of the pilum throw is resolved before the Close-combat and may affect the the number of dice available in the upcoming close combat.
Roman units, adjacent to the enemy, that have not expended their Pilum may also be ordered to throw Pilum if the card “Darken the Sky” is played by their commanding player. The Roman Player picks one adjacent enemy unit and throws two dice –apply the results just as one would before close combat—and remove the Pilum Marker.
Roman units which are close-combat attacked by Gallic units during the first two Gallic Player turns throw one dice to determine whether they can fire pilum normally. On a roll of “4-6” they do so—on a roll of “1-3” their pilum is “lost” (the Romans were surprised and had no time to deliver a pilum volley effectively or at all) and the marker is removed without any pilum fire taking place.
Roman Relief Moves & Cohort Maneuvers:
Adjacent Roman Heavy and Medium Infantry, instead of moving, may switch places in a “Relief/Cohort Maneuver”. Relief/Cohort Maneuvers may only be conducted through the play of Section cards ONLY. Instead of ordering one unit via a section card, the Roman Player may
order a pair of adjacent Heavy/ Medium Infantry units to switch hexes—at least one of the units switching places must not be adjacent to an enemy unit. A unit that switched places via the Relief/Cohort Maneuver into a hex adjacent to the enemy may close combat in the same player-turn.
Roman Elite Veteran Initiative:
Roman Heavy Infantry units that are ordered by Line Commands or an “Order Heavy Troops” card may move two hexes regardless of terrain (and close combat if they wish on an adjacent unit at +1 normal dice also regardless of terrain entered, but still use “normal” terrain combat close-combat effects as the dice baseline to calculate the number of dice used).
Roman Recruit Units:
The four Roman Medium Infantry units that start with four blocks each in Hex Row “A” are considered to be the newly recruited Legions that Caesar had placed at the back of his column. They were still marching to the battleground when the Gallic attack kicked off. When battling back these units “normally” only throw 3 dice. These units may not be ordered by the Roman Player (or attacked by the Gallic Player in any way) until two complete Roman Player-turns have been executed.
Roman Auxiliaries & Mercenaries:
All the Roman units other than the Heavy/Medium Infantry are Caesar’s non-Roman citizen auxiliaries and mercenaries who were badly handled by the Gauls over the river just as the Nervii attack started out. These troops headed for the rear panicked, but some later rallied back and even helped evict the Nervii from the camp-site that Caesar’s troops were erecting that afternoon. The units (represented by the four light foot and cavalry units) may not be ordered by the Roman Player until two complete Roman Player-turns have been executed---they may evade normally or stand and fight if the Gallic Player attacks them at the Roman Player’s option.

Optional Rule: New Terrain Type--Hedges
Add x10 Hedge hexside markers (I used some plastic model bushes that fit perfectly & look great from some Lego-type set)
Set-up each pair listed below denotes a hexside to place a Hedge marker on:
C3/D3 E3/E4 E4/E5 F6/F7 E8/E9 E9/E10
C11/E12 D10/D11 C10/C11 F7/F8
Effect of Hedge Hexsides on Movement: It takes a unit’s entire ordered move to move through a hedge hexside—the unit must start its move on the other side of the hedge hexside it passes through. Units that just passed through a hedge hexside in the same player-turn may not normally attack in close-combat or by missile fire. A Roman “Relief/Cohort Maneuver” may not take place between two adjacent units separated by a hedge hexside. Leaders, moving on their own without being attached to a friendly unit ignore the effects of hedge hexsides and may pass through them as if they do not exist
Effect of Hedge Hexsides on Command: Friendly Units in a “block” or “blob” of units for Command purposes and being ordered by the cards are NOT considered to be adjacent to each other for Card Command purposes if the units in question are separated by a hedge hexside. They also are NOT considered adjacent to each other for Leader Command influence in combat.
Effect of Hedge Hexsides on combat: The “Normal” dice when attacking or battling back through a Hedge—the normal dice is 2 dice either way—of course that can be increased depending on the card or rule used to bring on the battle. Hedges also block lines of sight for missile fire--, but Roman Pilum fire through hedges is conducted normally. Units that are adjacent to each other through a hedge hexside may still offer support to each other.