Historical Background
In the early spring of 185BC the Roman Praetors, Gaius Calpurnius and Lucius Quinctius joined forces (probably about 20,000 men) and marched to attack the Iberians at their camp near Toletum in Carpetania. The Romans were routed and lost about 5,000 men.
After this disaster the two Praetors recruited Spanish auxiliaries to replace their losses and marched against the Iberians once again. The Iberians were now camped on a hill across the Tagus River. There were two fords across the river. In full view of the enemy Calpurnius crossed over one ford and Quinctius over the other. The Iberians were slow to react, and by the time they came streaming out of their camp and across the plain, the Roman armies had joined up and were ready for battle. The Romans placed their best troops, the V and VIII legions commanded by Quinctilius Varus and Juventius Thalna, in the centre. Calpurnius took the right wing cavalry, and Quinctius the left wing cavalry. The Iberians formed a solid wedge and charged the Roman centre, which barely held until the Roman cavalry charged into the wedge and broke it up. This spurred the Roman infantry to attack and sweep the Iberians back to their camp in panic. Only 4,000 Iberians escaped out of their army of 35,000.
The stage is set. The battle lines are drawn and you are in command. Can you change history? 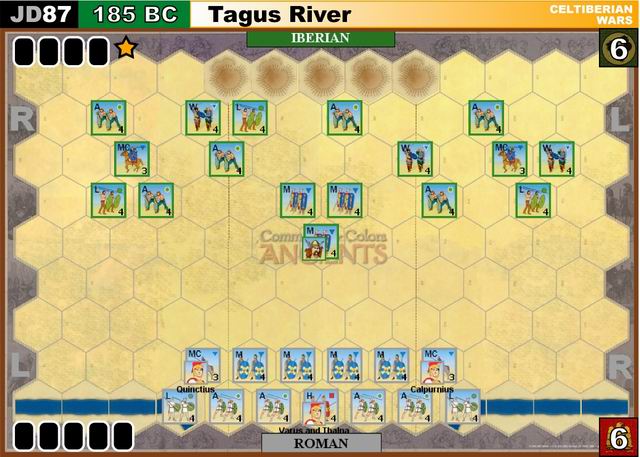 Special Rules
The river is only fordable on the curved sections.

The Roman leader in hex A7 represents two leaders. Treat as one leader for all game purposes.