Historical Background
In the aftermath of the 2nd Macedonian War, Rome and the Seleucids vied for supremacy in Greece. The Seleucid King, Antiochus III, was asked by the Aetolians to come to their aid in Greece, with the promise of troops and other allies. Antiochus set off with his available troops, with orders for other units to follow as soon as possible. No other allies actually materialised and the Aetolians, hard pressed by enemies at home, only contributed 4,000 men.
Rome responded by sending an army of 20,000 infantry, 2,000 cavalry and 15 elephants, commanded by the consul Manius Acilius Glabrio, to deal with the Seleucids. Antiochus, with only 14,000 infantry, 500 cavalry and 6 elephants retreated to the Eastern gate of the Thermopylae pass where he hoped to negate the Roman numerical advantage. Antiochus posted his 4,000 Aetolian allies in the mountains above the pass. In the pass he built earthworks between the sea and the foothills and a stone wall extending up the hill to an impassable cliff. He deployed war machines, slingers and archers on the hills and walls above his position, the phalanx behind the earthworks, flanked on the seaward side by the cavalry and elephants, and with the Silver shields, peltasts and other light troops in front to break up the Roman advance. Despite their numbers, the Romans were unable to break the Seleucid position, but Glabrio had sent two forces on a flank march through the mountains. One force of about 2,000 men, under the command of the tribune Marcus Cato, succeeded in defeating the Aetolians they met, and arrived behind the Seleucid position. Fearing a much larger army was in their rear, the Seleucids fled to their camp in panic, but were overtaken and massacred by the advancing Romans. Only Antiochus and 500 of his men, probably the cavalry, escaped.
The stage is set. The battle lines are drawn and you are in command. Can you change history? 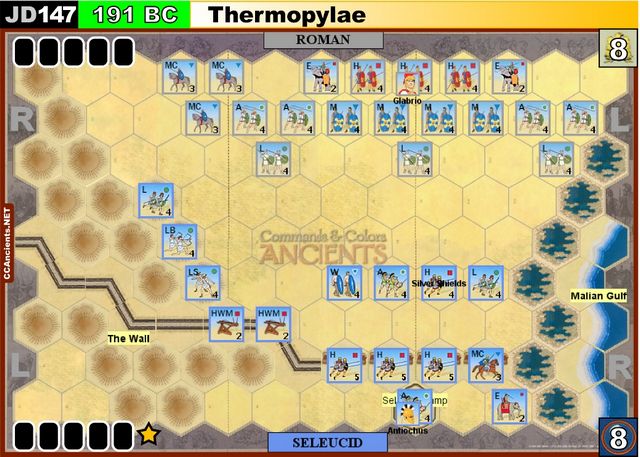 Special Rules
The scalable city walls represent the Seleucid stone wall. Treat it as a fordable river for all game purposes.

At the start of each Roman turn that player should roll a dice. If a leader is rolled the Roman player must place 2 Medium and 1 Auxillia Infantry units, and a Leader (Cato) in any of the following vacant hexes: C1, B1, and A1 to A7. This event can only occur once.

If a Roman unit ends a turn on the camp tile, remove the tile and award the Roman player a victory banner.

On the first Seleucid turn, that player is deemed to have played a "Darken the Sky" command card. No actual card is played or drawn on that turn.