Historical Background
With the catastrophic defeat of the Ionian fleet by the Persians at Lade in 494BC, the Ionian revolt was petering out. While the Persians were mopping up the last remnants of resistance, the former Tyrant of Miletus, Histiaeus, had formed a semi piratical Greek fleet operating out of the island of Lesbos, just off the Ionian coast. As supplies for his rebel band began to run low, Histiaeus was forced to land on the mainland near the town of Malene, in order to forage for food. Unluckily for Histiaeus, the Persian general Harpagus was in the region in command of a sizeable force of Persians. The Greeks were caught by surprise, with many of their ship's crewmen out in the surrounding fields. Histiaeus hastily formed up his hoplites and archers, together with any crewmen who were available and advanced to meet the approaching Persians, in order to help his foraging parties escape back to the coast. The two armies fought a hard and equal contest until the sudden arrival of the Persian cavalry which caused the defeat and rout of the Greeks and the capture of Histiaeus. Histiaeus had been a bit of a maverick, going from a favourite of King Darius, to a suspected traitor, to out and out insurrection. The Satrap of western Asia Minor, Artephernes, had no intention of indulging Histiaeus any more and had him impaled and decapitated.
The stage is set. The battle lines are drawn and you are in command. Can you change history? 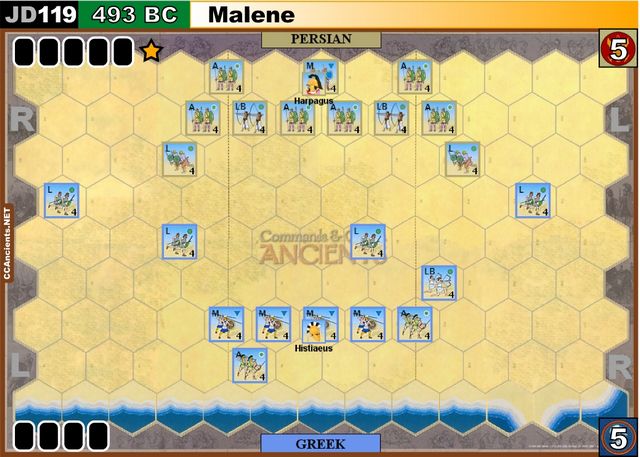 Special Rules
At the start of any one Persian turn, from their fourth turn onwards, the Persian player may place two medium cavalry units, a light cavalry unit and an attached leader in any three hexes numbered 1 or 12 and 13. They must all be placed on the same side of the board.