Historical Background
King Xerxes desired to punish the Athenians for his father’s defeat at Marathon and their support for Ionian revolts. He planned a second invasion of Greece in 480 BC and amassed a huge army to extend the Persian Empire into Europe. Several Greek citystates gathered around Athens and Sparta, and decided to slow the Persian advance at the narrow pass of Thermopylae. The Oracle at Delphi had announced that Sparta would either be destroyed or lose a King. Leonidas, one of the two Kings, chose the latter, leading 300 Spartans and other Greeks to one of History’s most famous last stands. Xerxes waited four days for the small Greek force to leave. Then, for two and a half days he unleashed his army, wave after wave, against the Greek Hoplites who stood firm. The Persians did not prevail until Ephialtes betrayed the Greeks by revealing a goat path that led behind their lines. Dismissing the rest of the army, Leonidas fought to the death with his Spartans. Their epitaph reads: “Go tell the Spartans, stranger passing by, that here obedient to their laws we lie”. While a tactical victory, the heavy losses and the delay, inflicted by just a few hundred Greeks, was a significant blow to the Persian morale. In September, the Greeks defeated the Persians at the naval battle of Salamis and Xerxes, fearful of being trapped in Europe, returned to Asia with part of his army.
The stage is set. The battle lines are drawn and you are in command. Can you change history? 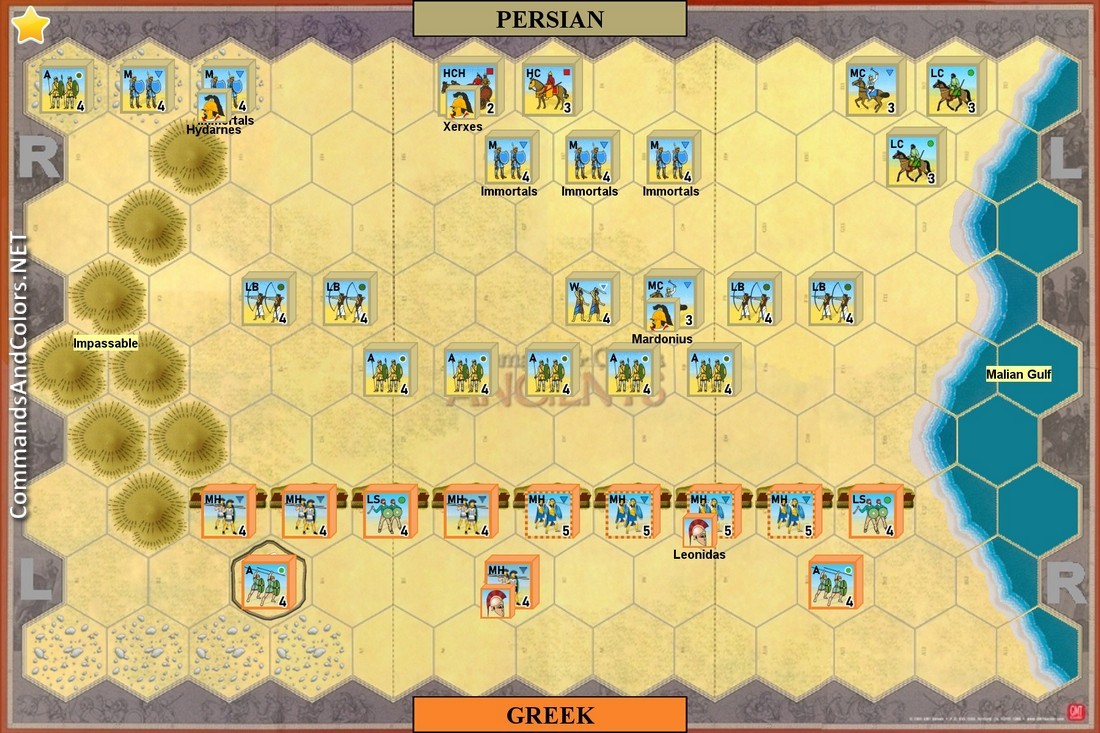 Special Rules
• When a Persian unit occupies the Greek camp hex or rampart hex at the start of his turn, remove the hex and gain 1 Victory Banner.

• The four Persian Immortal units are special units. Place a special unit block in the same hex as these units to distinguish them. The Immortals are armed with bows and will also follow Ranged Combat rules

Lastall replied the topic: #3624 2 years 1 month ago
We ran this twice like each of the ones before. The Greek army won both times and dominated both times. It was interesting and I want to play it again and see if we can get the Persians to win. Not a bad map.

Stanislav27 replied the topic: #2343 4 years 10 months ago
How come I am no table to log any results at present?

I wanted to add two victories for Persia.
Achtung Panzer replied the topic: #2023 5 years 7 months ago
Just to clarify, can any Leader card be played by the Persians to trigger the flank marching special rule or only Inspired Right Leadership on the / Any Section?

bartok replied the topic: #1361 10 years 7 months ago
what happen if 2 or 3 greek units occupies the broken ground base line hexes, for example the A and LS, or Demophilus.

\"\"and place them on vacant Greek broken ground baseline hexes\"\"

Only Hydarnes can go through the hills.
Imagine is a path of NO RETURN for the persians.
Imagine greeks units cant use the path.

I just want to clarify that the Passage through the Hills rule is triggered by playing any Leadership card and not just the Leadership in Any Section or Right Section cards?

I guess the reasoning is to ensure a high chance that the Persians will be able to outflank the Spartan positions during the game.

The-Admiral replied the topic: #1305 10 years 9 months ago
Accounts of the battle do describe the Spartans attacking forward from the wall.

HawkmoonVonKoln replied the topic: #1304 10 years 9 months ago
We've been playing yesterday :
The score :
10 - 6
10 - 9
The Persians won the 2 games.
Greeks have to leave the wall to smash the Persians.
If they stand and wait, the Persians only have to shoot with their light troops to weak the hoplites.
A line of hoplites advancing with a mounted charge will cause great damages against persian auxilia troops...

broadsword replied the topic: #1298 10 years 9 months ago
Better yet, if Sparta gets \"mounted charge\", play it and wipe out the front rank of Persian auxilia! With the right cards, the Spartans can juggernaut across the map and destroy the Persians in an open fight. They don't need the wall!

Achtung-Panzer replied the topic: #1295 10 years 10 months ago
Strange scenario this one. Why would the Spartans leave the defensive wall? The Persians simply fire their (relatively) ineffective range combat troops at them and the game is a bit boring. Both sides seem to simply wait for the flanking attack to get the battle started.

Hang on, isn't that what actually happened?

Perhaps a time limit should be applied to encourage the Persian infantry forward?
Read More...