Written by Giancarlo Ceccoli. Posted in Greco Persian Wars (500-448 BC)

Historical Background
The Battle of Marathon took place in 490 BC, during the first Persian invasion of Greece. It was fought between the citizens of Athens, aided by Plataea, and a Persian force commanded by Datis and Artaphernes. It was the culmination of the first attempt by Persia, under King Darius I, to subjugate Greece. The first Persian ininvasion was a response to Greek involvement in the Ionian Revolt, when Athens and Eretria had sent a force to support the cities of Ionia in their attempt to overthrow Persian rule. The Athenians and Eretrians had succeeded in capturing and burning Sardis, but were then forced to retreat with heavy losses. In response to this raid, Darius swore to burn down Athens and Eretria. At the time of the battle, Sparta and Athens were the two largest city states. Once the Ionian revolt was finally crushed by the Persian victory at the Battle of Lade, Darius began to plan to subjugate Greece. In 490 BC, he sent a naval task force under Datis and Artaphernes across the Aegean, to subjugate the Cyclades, and then to make punitive attacks on Athens and Eretria. Reaching Euboea in mid-summer after a successful campaign in the Aegean, the Persians proceeded to besiege and capture Eretria. The Persian force then sailed for Attica, landing in the bay near the town of Marathon. The Athenians, joined by a small force from Plataea, marched to Marathon, and succeeded in blocking the two exits from the plain of Marathon. Stalemate ensued for five days, before the Athenians decided to attack the Persians because, under the cover of night, some of the Persian fleet had set sail for Athens. Despite the numerical advantage of the Persians, the hoplites proved devastatingly effective against the more lightly armed Persian infantry, routing the wings before turning in on the centre of the Persian line. The Battle of Marathon is perhaps now more famous as the inspiration for the Marathon race. Although historically inaccurate, the legend of the Greek messenger Pheidippides running to Athens with news of the victory became the inspiration for this athletic event, introduced at the 1896 Athens Olympics, and originally run between Marathon and Athens.
(taken from WIKIPEDIA)

Notes from the author
Recreating the battle of Marathon presents two major problems:
- The exact composition of the armies, since the few reliable sources on the event;
- Being able to do it properly the charge of the Athenians, if it truly was performed.
For the army, I used the reconstruction of P. Krentz, “The battle of Marthon”, which I think is very valid and recent.
For the charge I put in the optional rule, and I studied a placement to a number of hexes between the two armies that can afford to a) oblige the greek to a first approximation of 1 hex and b) to do the charge with the Command Line.With regard to the geography of the place, I preferred to take the view that the two armies were perpendicular to the coast, with the sea on the left of the Persians.
Finally, I recommend using the optional rules that I have taken from the game "Battle of Westeros" - FFG:
- Retreats,
- 8 sided dice.
The Retreat rule allows you to have the more realistic situations and it is easy to apply.
The 8-sided dice is possible to highlight the best training and preparation of units heavier than the light. In practice, the light units are easier to hit. 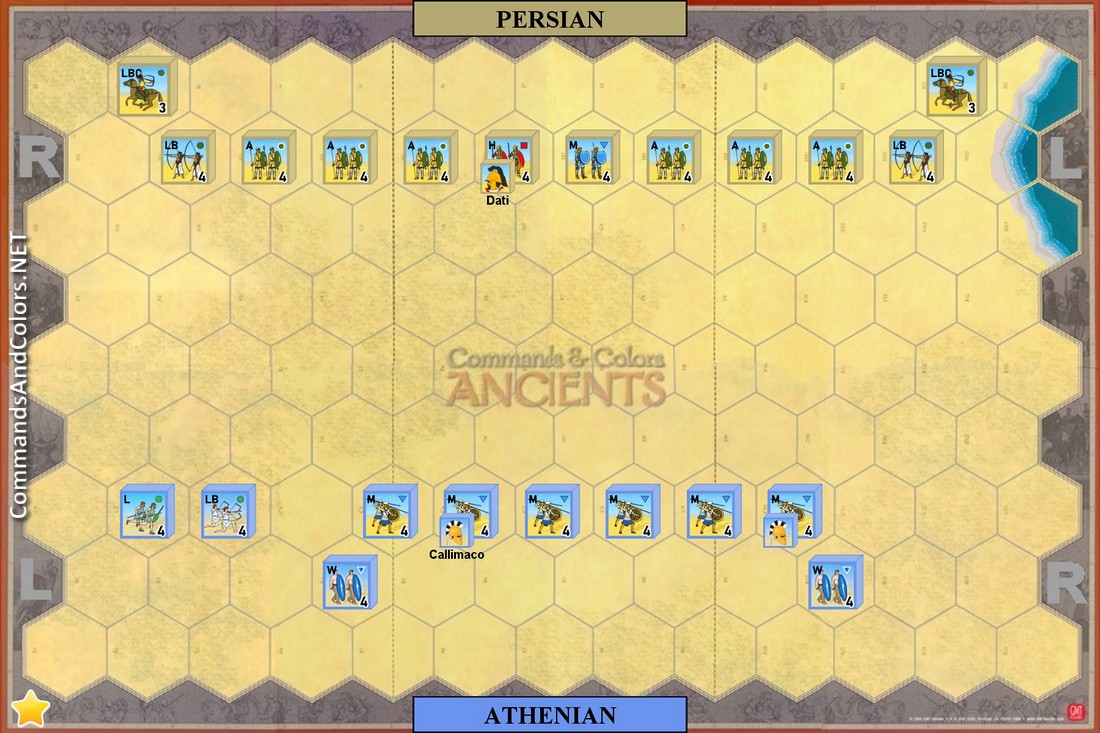 Special Rules
1- The Athens ‘s race . Once per game, the Athens player can decide to make the charge with the medium infantry. These units can, playing a card command line, move 3 hexes and still attack. All units move 2 or 3 hexes during charging, pull, if they attack, 1 die less of normal.

3 - The two Athenians units of infantry warriors should be considered medium.

4– The 3 sea hexes are impassable.