Historical Background
Seizing upon the chaos created elsewhere by the Ionian Revolt, Onesilus, the brother of King Gorgos of Salamis (Cyprus), took the throne in 498 BCE with the support of Cypriot Greeks.  Moving swiftly to respond, Persia dispatched an invasion force to join with loyalists on the island and crush the uprising.
The Persian force, led by Artybius, included Greek-style Punic hoplites, typical Persian spearmen and light infantry alongside chariots and cavalry.  Opposing the Persians, the rebel Cypriots fielded nearly as many infantry, mustering perhaps 10,000 hoplites complemented by light infantry and a chariot force composed primarily of Cypriot aristocracy.
The two armies met on the plains of Salamis, with the rebels gaining the upper hand initially by withstanding a charge by the Persian left, killing Artybius.   According to Herodotus, it was at this point that members of the Cypriot aristocracy, led by Stasenor of Curium, abruptly switched sides, killed Onesilus, and assisted the combined Persian-Punic force in rolling up the Greek line and destroying the rebel force.  The victory at Salamis was decisive, as the anti-Persian uprising against Gorgos was soon completely crushed, as the focus of the Ionian Revolt returned to the mainland.
The stage is set. The battle lines are drawn and you are in command. Can you change history? 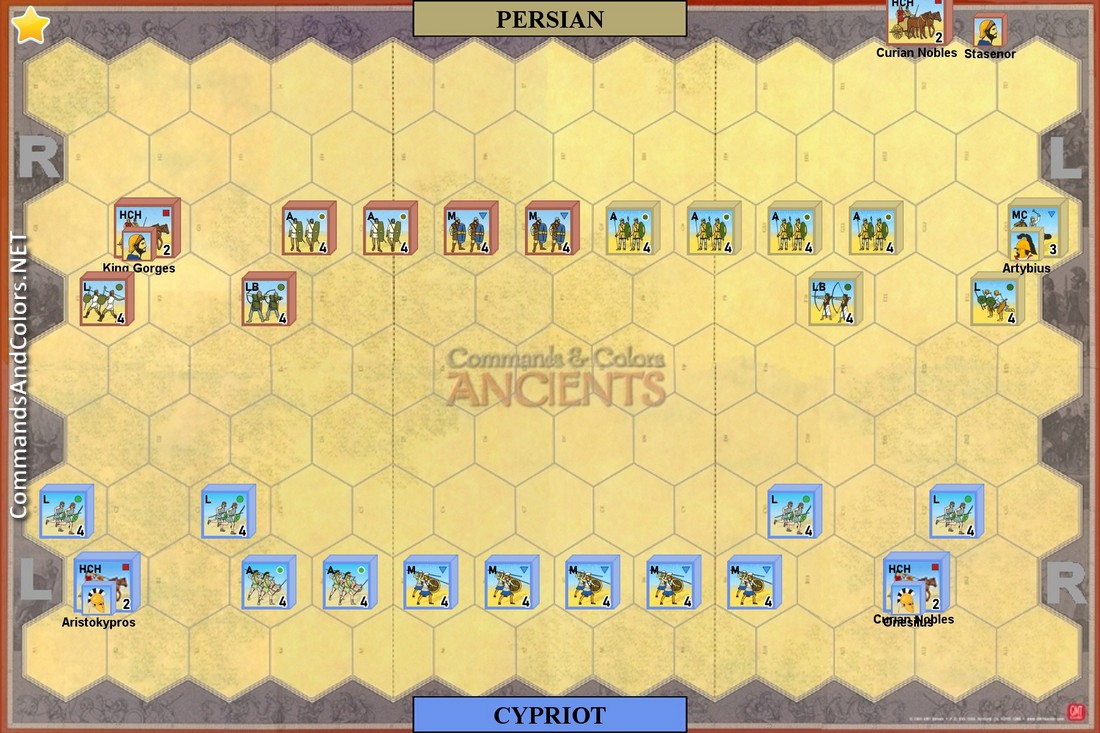 Special Rules
Curian Nobles Defection
1. Every Persian turn beginning on turn 3, the Persian player will roll 1 die before playing his command card.  If a LDR is rolled, the Curian Nobles light chariot unit will immediately switch sides, and Onesilus, if still attached to the unit, will immediately be removed from the board and counted as a banner.

1a.  If the Curian Nobles unit defects, the Persian will gain another leader (Stasenor of Curium), who will be immediately attached to the unit.

1b. If Onesilus is NOT attached to the unit at the beginning of any Persian turn (3rd or later), the Persian player rolls 2 dice, with the same rules applying.