Historical Background
In 480 BC an alliance of Greek city-states fought the invading Persian army in the pass of Thermopylae. Vastly outnumbered, the Greeks delayed the enemy in one of the most famous last stands of history. A small force led by King Leonidas of Sparta blocked the only road through which the massive army of Xerxes I could pass. The legend of Thermopylae, as told by Herodotus, has it that Sparta consulted the Oracle at Delphi before setting out to meet the Persian army. The Oracle's warning was that either Sparta would be conquered and left in ruins, or one of her two hereditary kings must sacrifice his life to save her. Greek morale was high. Herodotus wrote that when Dienekes, a Spartan soldier, was informed that Persian arrows were so numerous that they blotted out the sun, he remarked with characteristically laconic prose, “So much the better, we shall fight in the shade.” The Persians succeeded in defeating the Greeks but sustained heavy losses, disproportionate to those of the Greeks. A local resident named Ephialtes betrayed the Greeks, revealing a mountain path that led behind Greek lines. Dismissing the rest of the army, King Leonidas stayed behind with 300 Spartans and Thespian and Theban volunteers. Though they knew it meant their own deaths, they secured the retreat of the other Greeks. The losses of the Persian army alarmed Xerxes. When his navy was later defeated at Salamis he fled Greece leaving only part of his force to finish the conquest of Greece. Xerxes was defeated at the Battle of Plataea.
The stage is set. The battle lines are drawn and you are in command. The rest is history. 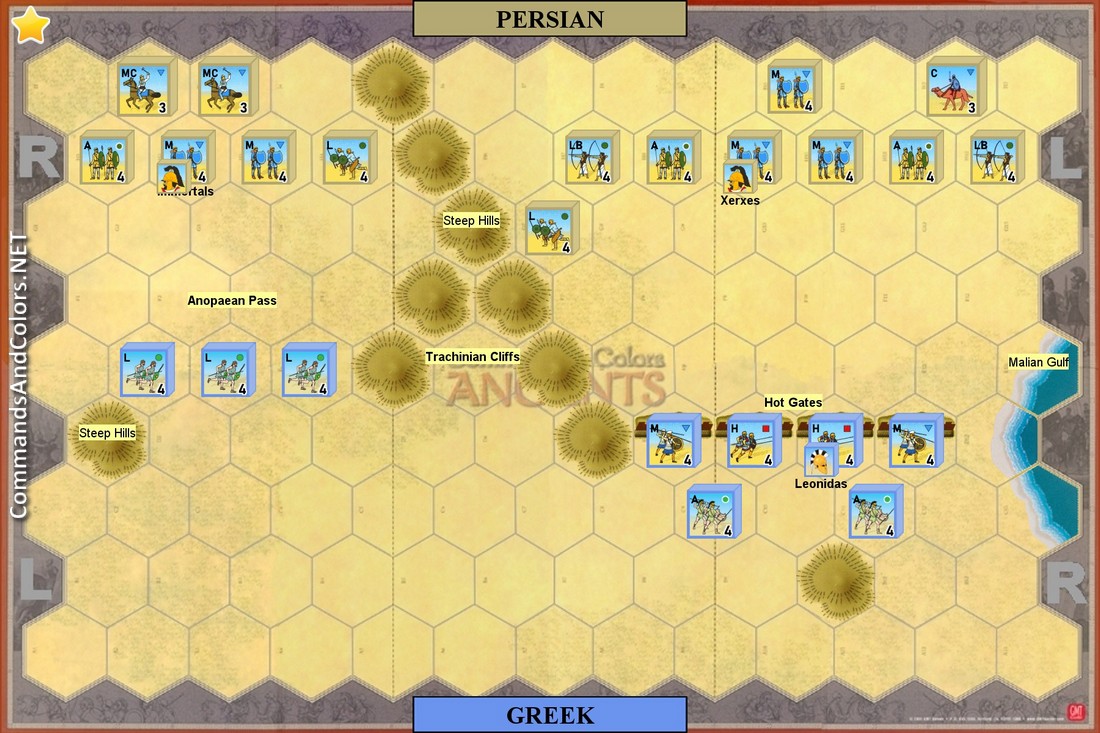 Special Rules
Do not reshuffle the deck after ‘I am Spartacus’. If the deck runs out the Greeks immediately win.

The rampart hexsides represent the Phokian Wall at the Hot Gates. If a Persian unit enters a rampart hex the wall section is destroyed.

The Persian Immortals is a special unit. Place a special unit block in the same hex as the Immortal unit to distinguish it from the other units. The Immortals are armed with bows and follow Ranged Combat rules.