Historical Background
After reaching an agreement with their Tarantine neighbors concerning the ownership of the fertile area of Siris, Thurii was soon again embroiled in a local struggle, this time against the native Lucani, an Oscan-speaking Italian highland tribe.  The Lucani, a largely democratic people, frequently clashed with the colonists of Magna Graecia they settled the fertile coastal areas near the dominion of the native Italian inhabitants surrounding the modern-day Gulf of Taranto.
The Thurians again joined their Messapian allies to put into the field an army that, at perhaps 3,000 hoplites and tribal warriors, outnumbered their Lucanian opponents, who fielded an army akin to their Samnite neighbors to the north.  With wealthy nobility composing a core of armored cavalry and well-equipped infantry, the Lucanians apparently felt confident enough to invade the area immediately surrounding Thurii.  Known as the Sybarian Plain, this fertile coastal lowland offered ample room for deployment, and the Lucanians were apparently outmaneuvered by a veteran of Greek hoplite warfare.
Led by the exile Cleandridas, the Greek colonists deployed for battle to mask their greater numbers, offering battle in a narrower formation than usual, with perhaps a hoplite reserve screened by light troops and cavalry.  Assuming he followed the standard Greek formation of stationing his most well-trained hoplites on the right, this deployment assumes a more cohesive effort with his Messapian allies than years earlier against the Tarantines.
In the ensuing “Greek”victory, the steadfast hoplites on the right provided the anvil, fixing the smaller Lucanian force in place as the composite force on the Thurian left served as the hammer, smashing the barbarian right.  Although dealt a major defeat by the tactical expertise of Cleandridas, the Lucanians would be back in force before long to again menace the colony at Thurii.
The stage is set. The battle lines are drawn and you are in command. Can you change history? 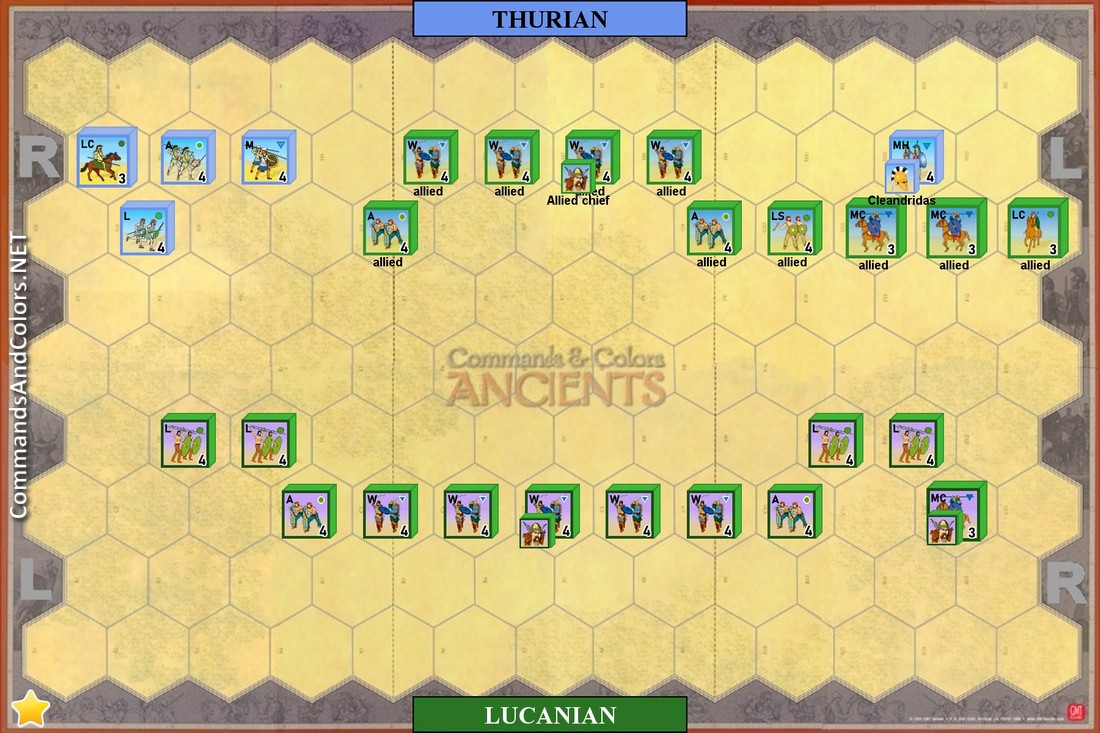 Special Rules
If Cleandridas is killed, the Thurian command is immediately reduced to 4 cards for the remainder of the game.