Historical Background
In 163 BC Judas responded to Seleucid attacks against Jews in Galilee and Gilead. He sent Simeon to Galilee with 3,000 men, while he and Jonathan crossed the Jordan river into Gilead with 8,000 men. The Seleucid satrap of the Trans-Jordanian area was a man called Timotheus. Timotheus raised an army of local militia, garrison troops and Arabian mercenaries, and was apperently reinforced with some eastern (Median?) cavalry. Timotheus was defeated twice by Judas, who captured many settlements and forts in the region. Timotheus and his army finally encamped outside the town of Raphon in north eastern Gilead behind a stream. Timotheus planned to attack Judas as soon as he encamped on the other side, but Judas attacked over the Stream immediately on his arrival, and the Seluecids were routed. Timotheus was captured by the Maccabean commanders Dositheus and Sosipater, who released him on the promise that he would forward the cause of Judaism in Antioch. Judas successfully completed his campaigns in Gilead and returned to Judaea without apparently suffering any losses. Possibly another piece of propoganda.
The stage is set. The battle lines are drawn and you are in command. Can you change history? 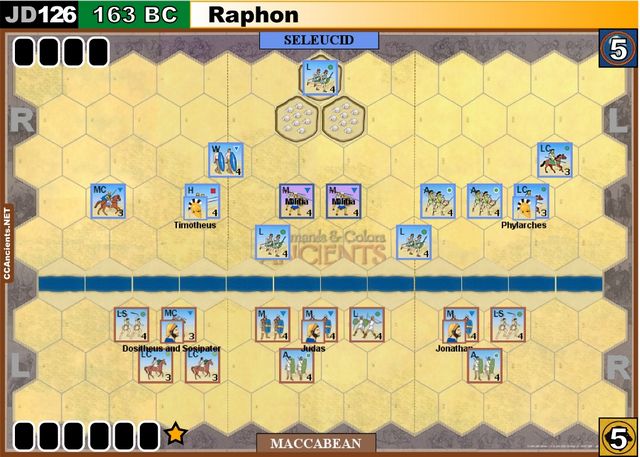 The Seleucid medium infantry units are militia and battle with only 3 dice.

The Maccabean leader labelled as 'Dositheus and Sosipater' represents two commanders, but is treated as one leader for all game purposes.