Historical Background
When Lysias withdrew to Syria after the battle of Beth Zacharia, he left Nicanor (not the same chap from the battle of Ammaus) in charge of Judaea and the Akra garrison. As Lysias and his contender for the Seleucid throne, Phillipus, had most of the Royal army, Nicanor had to make do with local troops at his disposal. Nicanor first clashed with the Hasmonaeans under Simeon at Kafar Dessau where he was victorious. The Seleucids were now probably outnumbered by the Jewish troops and so Nicanor embarked on negotiations with Judas in which he hoped to trick and kill him. When this failed he once again attempted armed conflict, but was defeated by Judas at the battle of Kafar Salama. Nicanor realized that in order to defeat the Jews he needed more men and so he requested and was granted reinforcements. Nicanor left Jerusalem with part of his force and rendezvoued with the reinforcements to the north. Nicanor now had 9,000 men and he encountered Judas and a Hasmonaean force just north of the Jewish camp at Adasa on their way back to Jerusalem. The Seleucids were defeated, with Nicanor and 500 of his men killed. Bar-Kochva believes that the Hasmonaeans had numerical superiority in this battle as otherwise Judas would not have accepted battle in relatively open terrain and would have tried to ambush the Seleucids.
The stage is set. The battle lines are drawn and you are in command. Can you change history? 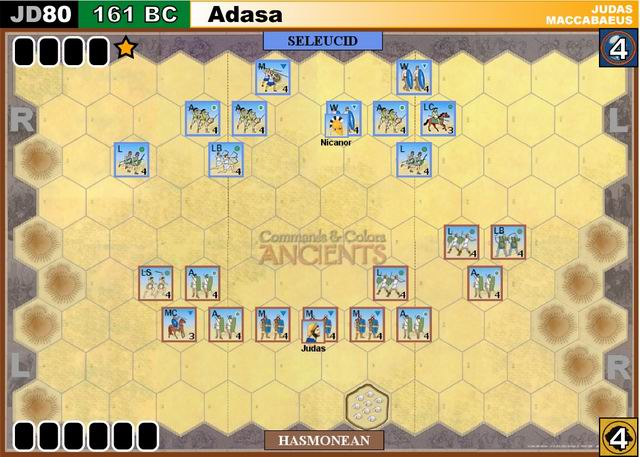