Historical Background
Following the purification of the Temple, Judas started to help the Jews in settlements outside Judaea. With his power base and manpower resources growing, and with no response from Antioch, in early 162 BC, Judas decided to capture the Acra fortification in Jerusalem, and placed it under siege. This elicited an immediate reaction from Lysias. With the return of the Royal army from the east, following the death of Antiochus IV, Lysias, who was accompanied by Antiochus V, was able to take a much stronger army to Judaea, including the Royal Guard, cataphract cavalry and eight elephants. Lysias once again approached Jerusalem via Beth Zur, which was captured and garrisoned. Judas encamped his army at Beth Zacharia and hoped to catch the Seleucids in a defile as they marched north to Jerusalem. Lysias was wise to this, and covered his advance with light troops on the ridges. Lysias's army emerged from Wadi Shukheit to find the Hasmonaeans deployed on the saddle between two hills just south of Beth Zacharia. Depite brave resistance, during which Judas's brother Eleazer died killing one of the elephants, the Hasmonaean army was overwhelmed by the heavy seleucid assault, and forced to withdraw to the Gophna hills. Lysias placed the Temple under siege, but before it fell, a man called Phillipus arrived from the east with an army and a claim to the throne. Lysias rescinded all the edicts of Antiochus IV to placate the Jews so that he could once again withdraw to Antioch where he defeated Phillipus.
The stage is set. The battle lines are drawn and you are in command. Can you change history? 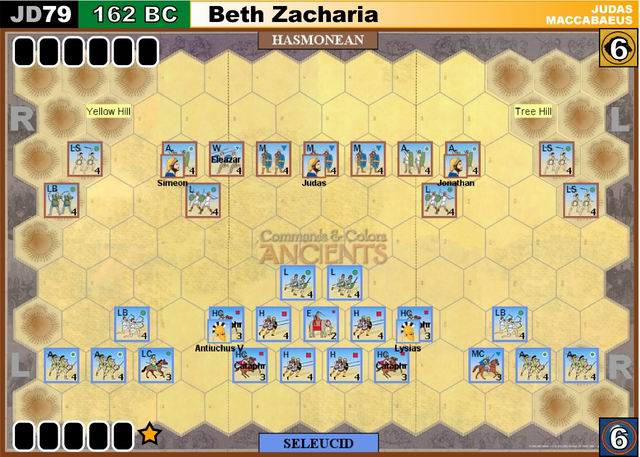 Special Rules
Due to the presence of Eleazar with the Hasmonaean warrior infantry unit, that unit may always count leader symbols as hits in close combat and may always ignore one reteat banner.

Fright at First Sight: Any Hasmonaean unit in close combat with the elephant unit may not ignore any flags rolled by that elephant unit, even if the unit has an attached leader or is supported by two adjacent friendly units.