Historical Background
The Seleucid defeat at Ammaus, coupled with the fact that the bulk of the Royal army was on campaign with the king in the east, led Lysias to attempt to sort out the Jewish problem by negotiation, but when these dragged on for 6 months with no solution, he decided to act himself. He assembled an army of about 20,000 men, and approached the Judaean hills from the south, through the friendly territory of the Idumaeans. This route led past the Jewish held fort of Beth Zur which Lysias stopped to capture. The accounts of this battle are scanty and confused. Did Lysias actually capture Beth Zur or not, and was he attacked on the march north from Beth Zur or in his camp at that place? Bar-Kovcha beleives he did capture the fort and the battle was a raid against his camp as he prepared to head north. My battle is based on this being a raid on the Seleucids while the seige was ongoing. The Seleucids are caught by surprise, with their army in camp, and only scout patrols and observation units immediately available to oppose the Jews. The Hasmonaean army had now reached a size of 10,000 men, although still of an irregular nature. The battle is cited in all sources as a Hasmonaean victory, but whether Lysias withdrew to Syria because of this, or, because of the death of Antiochus he needed to cement his authority in Antioch as the guardian of the young king, Antiochus V, is unknown. With this victory and the retreat of Lysias, Judas deemed the time ripe for the re-purification of the Temple in Jerusalem.
The stage is set. The battle lines are drawn and you are in command. Can you change history? 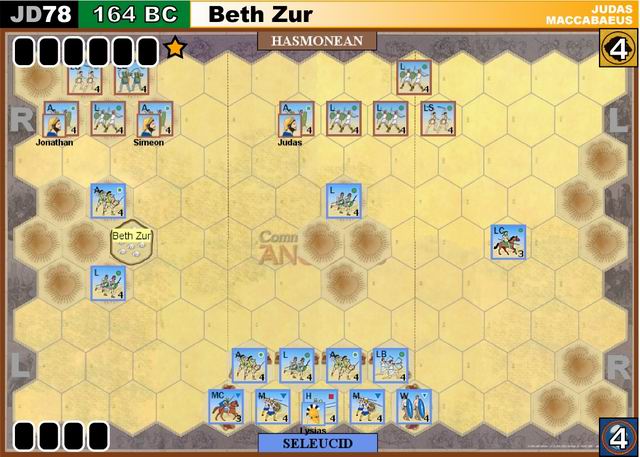 The Camp represents the fort of Beth Zur. It is considered to be on a hill, blocks line of sight and is impassable.