Historical Background
Despite the Seleucid defeats in Judaea, the Jewish revolt was still a low priority for Antiochus, as in 165 BC he proceeded east with the bulk of his army, in an attempt to re-capture the parts of his eastern empire that had been taken by the Parthians. Antiochus left his regent Lysias in charge of the western empire with instructions to sort out the Jewish problem. Lysias passed the problem on to Ptolemy, the Govenor of Coele Syria and Phonecia, and he in turn despatched an army of approximately 20,000 men under the command of Nicanor and Gorgias. The Seleucids set up camp on the plain below the hills around the town of Ammaus, from where they could either venture into the hills after the Jews, or more preferably, wait for them to come to them. Not wishing an open contest, Judas assembled his troops, now numbering 6,000, at Mizpah, in the hills east of Ammaus. Judas hoped that the Seleucids would split their army to come after him, amd this is what happened when Gorgias with 6,000 of the best troops set off on a night march up the Beth Horon ascent to surprise the Jews. Judas, after morale boosting religious ceremonies, picked his best 3,000 men and made his own night march to a hidden valley just south of the Seleucid camp. As dawn broke, Gorgias found a deserted camp at Mizpah, while Judas and his men fell on the unsuspecting Seleucid camp, with many men still asleep. The Jews broke into the camp and routed the Seleucids, killing 3,000, for Judas's greatest victory.
The stage is set. The battle lines are drawn and you are in command. Can you change history? 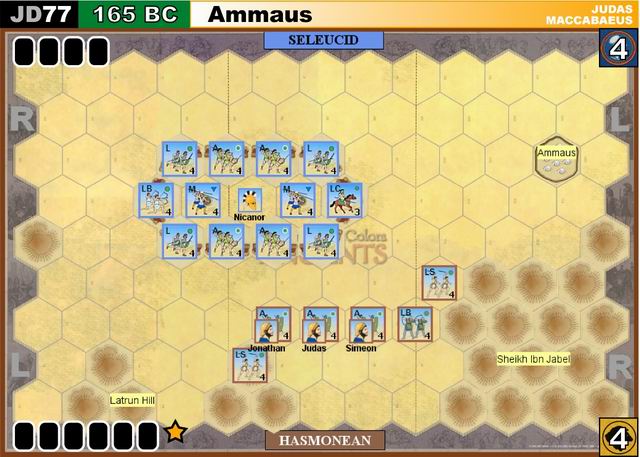