Historical Background
Following the defeat of Apollonius, the next Seleucid attempt to suppress the Jewish revolt came from a leader called Seron, who Bar-Kovcha believes to be from Thrace, and was probably in command of a force of Thracian Mercenaries from the coastal plain of Judaea. The Thracians marched east towards the mountian plateau north of Jerusalem, via the Beth Horon ascent. Seron and his men were ambushed by Judas Maccabaeus and a small picked force, in a narrow file between the heights of Sheikh Abu-Shusha and the sheer drop to Wadi Jureidum, near the village of Upper Beth Horon. The Seleucids were once again surprised and routed, with the survivors fleeing west back to the coast after losing 800 men killed in the battle and pursuit. It was clear from these first two encounters with the Jews that the Seleucids needed to apply more force than just local garrison troops.
The stage is set. The battle lines are drawn and you are in command. Can you change history? 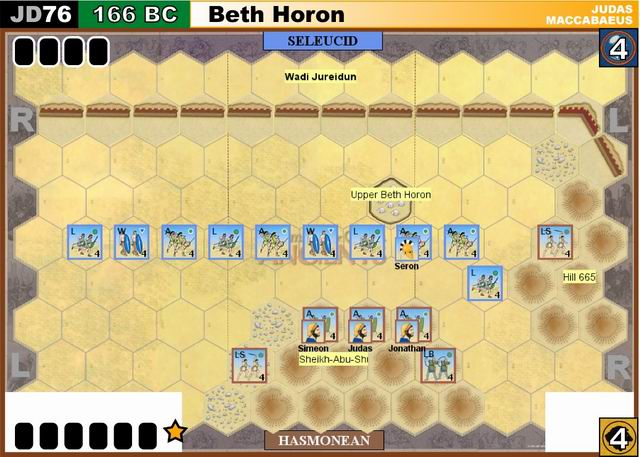 The rampart tiles represent almost vertical slopes down to Wadi Jureidun and are impassable.