Historical Background
The Jewish revolt against the Seleucids began as a result of the Seleucid King, Antiochus IV Epiphanes, attempting to force Hellenism on the Jews. Antiochus dispatched Apollonius to Jerusalem, where his man imposed the king's will by desecrating the Holy Temple with pagan ritual and turning it into a shrine to Zeus. The fort of Acra was built in Jerusalem and a strong permanent garrison installed. Seleucid officials then began travelling out into Judaea to enforce the edict against Jewish practices.
In the village of Modein, the leader of the Hasmonaean family, Mattathias, encouraged the villagers to kill the Greek enforcers when they arrived, and he then fled east into the Gophna hills with his 5 sons and a small band of followers. The revolt was on, but Mattathias died soon after and his eldest son, Judas Maccabaeus, took up the reigns of leadership. The first Seleucid to react to the situation was Apollonius,the governor of Samaria to the north of Judaea. He was probably the Same Apollonius who defiled the temple. He brought with him his own force of Mysian mercenaries along with Macedonian settlers from Samaria and Samaritan auxillaries. Judas, with only a few hundred men, set an ambush for Apollonius somewhere favourable on the road between Samaria and Jerusalem. The Seleucids were overun with many killed, including Apollonius.
The stage is set. The battle lines are drawn and you are in command. Can you change history? 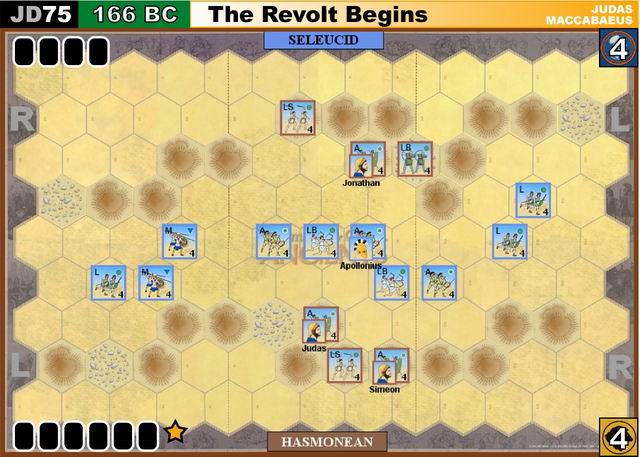