Historical Background
While many of the tribes of Britain resisted Rome until they were conquered and crushed, a few tribes, like the Iceni, formed pacts with the Romans to remain semi-independent. The Iceni client-king Prasutagus died while the Roman governor, Gaius Suetonius Paulinus, was campaigning in what is now northern Wales. In Suetonius’ absence, the procurator, Catus Decianus, took advantage of these to events seize lands, recall loans, and generally revoke all the advantages the clients had obtained from Claudius. When Prasutagus’ widow, Boudica, complained, she was flogged and her young daughters raped in front of her. Instead of suppressing dissent these barbarous acts fanned the fires of revolt. The Iceni, Trinovantes, and others rose up, sacking the legion colony of Camulodunum, defeating several small Roman forces, burning Londinium and Verulamium (St. Albans), and killing as many as 70,000 people.
Suetonius summoned reinforcements from all over Britain until he was strong enough to fight on a carefully selected defensive position offering a narrow front that would minimize the enemy numbers. Flushed with success, Boudica’s Celtic host may have numbered as many as 50,000 fighting men, followed by their families and baggage wagons loaded with plunder. She deployed these wagons at the rear of her army. The men would fight all the harder knowing that their families were watching and would be in grave danger if the Romans triumphed. The Britons launched a massive frontal attack. Suetonius held his forces in place. As the charging Britons neared the Roman line, they were staggered and stopped by a storm of pila. Only then did the Romans attack the confused Britons, driving them back onto their wagons and cutting them down by the thousands. Boudica managed to escape, but later committed suicide rather than be captured. The exact location of the battle is uncertain, but most commonly held to have taken place at what the Anglo-Saxons called “Watling Street,” hence the anachronistic name.
The stage is set. The battle lines are drawn and you are in command. Can you change history? 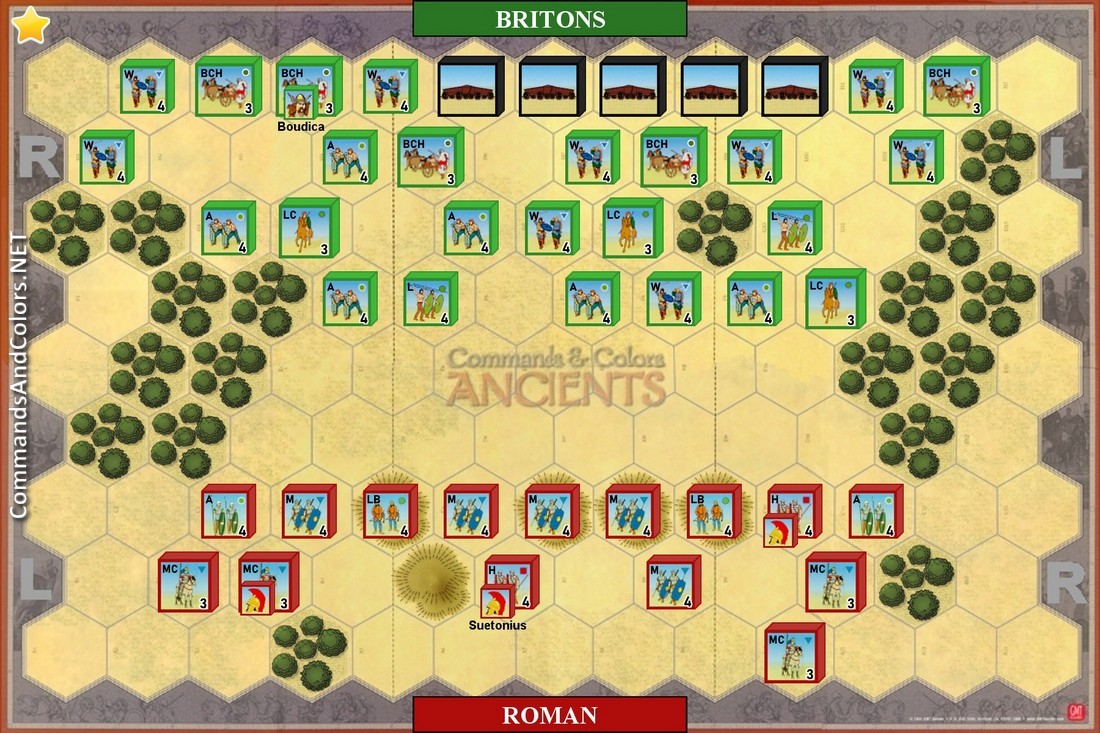 Treat the Wagon Laager blocks as impassable terrain (occupied by women and children).