Historical Background
Following their defeat at Tifernum the Samnites realised that they could not defeat Rome alone and so persuaded the Etruscans, Senones Gauls and Umbrians to Join a coalition to finally stop the growing Roman dominance over Italy. The Combined army of 80,000 men far outnumbered the 40,000 men in the Roman army, commanded once again by the consuls Quintus Fabius Rullianus and Publius Decius Mus and including an elite force of 1000 Campanian Knights. The Romans sent the small Rome garrison to raid Etrruia and Umbria and this had the desired effect of drawing these contingents away to protect their homeland. With the Samnite/Senones army now down to 50,000 troops the Romans offered battle.
The battle opened with a ferocious attack by the Gauls on the Romans under Decius Mus. Decius responded with a cavalry charge which, although initially effective, was defeated by the Gallic chariots. With his army collapsing it is said that, like his father at the Battle of veseris, Decius rode into the Gallic horde and died committing the Act of Devotio. This was enough to rally his men, and with Rullianus having driven off the Samnites on his half of the battlefield, Rullianus was able to commit his Triari, Campanian Knights and part of the III Legion, under the Tribune Lucius Cornelius Scipio, into the Flank of the Gauls. This was too much for the Gauls and they joined the Samnites in headlong retreat. Only 12,000 Samnites and Gauls escaped the slaughter in which 8,700 Romans and 25,000 Gauls and Samnites were killed.
After a further Series of defeats the Samnites finally accepted Roman dominance in 290 BC. They would rise once more to join the Campaigns of Pyrrhus on behalf of the Greeks of southern Italy, but with his defeat all the peoples of Italy were absorbed into the Roman Commonwealth, all that is accept the Gauls in the north...
The stage is set. The battle lines are drawn and you are in command. The rest is history. 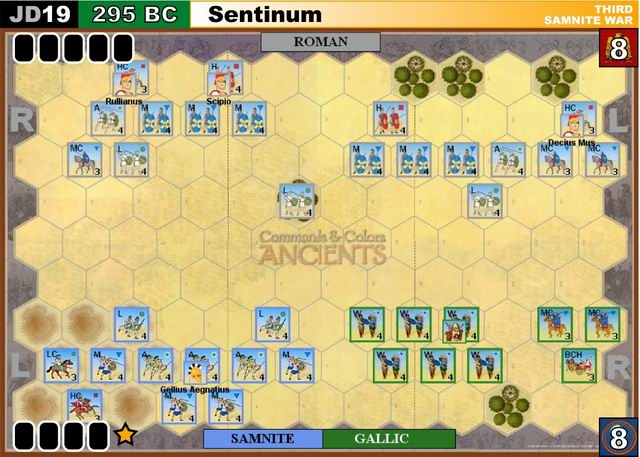 Special Rules
The Gallic army is in 2 parts. The Samnites are on the left side of the board and the Senones are on the right. Use green barbarian blocks for the Senones. Orders may only be issued to units of 1 army at a time.

The Roman heavy cavalry units (Campanian Knights) each have only 1 block. Both must be eliminated for the Galllic player to receive a victory banner.

Once per game the Roman player may declare the "Act of Devotio" if that player starts his/her turn 2 or more banners behind. Move Decius Mus up to 4 spaces adjacent to a Gallic unit and remove him from the board. The Roman player scores 1 Victory banner and the Gallic player scores nothing. On the subsequent Roman turn all Roman units battling in close combat against the Gauls will hit with a leader symbol even without the assistance of a leader. At the end of the turn the Roman player draws 2 cards and will now have 6 cards for the rest of the game.

The-Admiral replied the topic: #1660 3 years 9 months ago
I'm sorry you were confused.

The order of battle and terrain were based on the GBoH scenario from the Barbarians expansion. You will have to ask them where they got their information from?

My solitaire and ftf battles of the scenario have, bar one, been very close battles, with the edge going to the Romans, which in my own opinion is how the battle should play out.

This far removed from the event it is impossible to be accurate on these kind of aspects, but I'm glad you enjoyed it after your changes.
ozzie replied the topic: #1657 3 years 10 months ago
Found this scenario doesn't work well and is confused. Improved it by removing the Samnite Auxilia and replaced them with a single line of 5 medium infantry (Samnites were recorded by Roman authors as fighting in a single line and lacking reserves) and replacing the light and cavalry units for a single medium cavalry unit (Samnite cavalry are typical Italian cavalry but not numerous). The two Campanian (Roman) heavy cavalry units are replaced with a single medium cavalry on the Roman left. The wood in the centre of the table was removed (no evidence of this in the sources) and the light infantry unit returned to the Roman battleline. After these it played out excellently and very even as historically it should be.
Read More...