Historical Background
The Battle of the Muthul was an episode of the Jugurthine War. This battle was fought in 108 BC between the Numidians led by King Jugurtha, and a Roman force under Caecilius Metellus. The Romans were victorious, and four years later Jugurtha was dead, executed by the Romans following his capture by Lucius Cornelius Sulla. The Roman historian Publius Rutilius Rufus distinguished himself during the battle, while Gaius Marius' military genius shined for the first time, saving the day for the Romans.
Metellus' army was to reach the interior of Numidia. His army had to descend from the mountains and cross a desert plain, eighteen miles wide, to reach Muthul river, where he had to refill his water reserves. Jugurtha had deployed part of his infantry and all of his war elephants along the river, under Bomilcar, while all of his cavalry and the best part of his infantry was hidden in a short and bushy ridge along the path the Roman army had to follow.
Descending from the mountain pass, Metellus noticed the ambush, but his army needed to refill its water reserves, and thus to cross the desert without cavalry coverage and under the sight of the enemy. So he detached a small force, which, under the command of Rufus, had to set up a camp next to the river. The main part of the Roman army moved diagonally towards the Numidian force on the ridge to dislodge them.
Jugurtha ordered his infantry to cut off the retreat for the Romans, occupying the mountain pass, while the Numidian cavalry charged against the Romans, scattering them in small detachments. The Romans were kept in small groups, unable to perform any coordinate movement. Each group was fighting for its own survival, and the Numidian cavalry had the control of the battlefield. Bomilcar engaged the troops of Rufus, thus preventing him to aid Metellus' troops .
At this point an officer who had raised from the ranks, Marius, re-organized a few detachments, and led a column of 2000 soldiers through the Numides to free his commander Metellus. Marius then led the Roman column up the hill against the Numidian infantry, which retreated leaving to the Romans the control of the hill. From this position, Marius led his men at the back of the Numidian cavalry, uniting the separated Roman detachments into a single army.
At the same time, Rufus had held the Numidian force on the river, and succeeded in killing or routing the Numidian elephants. At evening, the two armies met and rejoined.
Despite the retreat of the Numidians, the retreat was well timed by the quick-thinking Jugurtha. As a result, Numidia suffered light casualties in comparison to the battered Romans. Therefore, the result was somewhat indecisive.
The Romans primarily survived the battle thanks to the luck of the Roman scouts prior to the battle, and the inspirational leadership of Marius against the odds.
Retrieved from "http://en.wikipedia.org/wiki/Battle_of_the_Muthul"
The stage is set. The battle lines are drawn and you are in command. The rest is history. 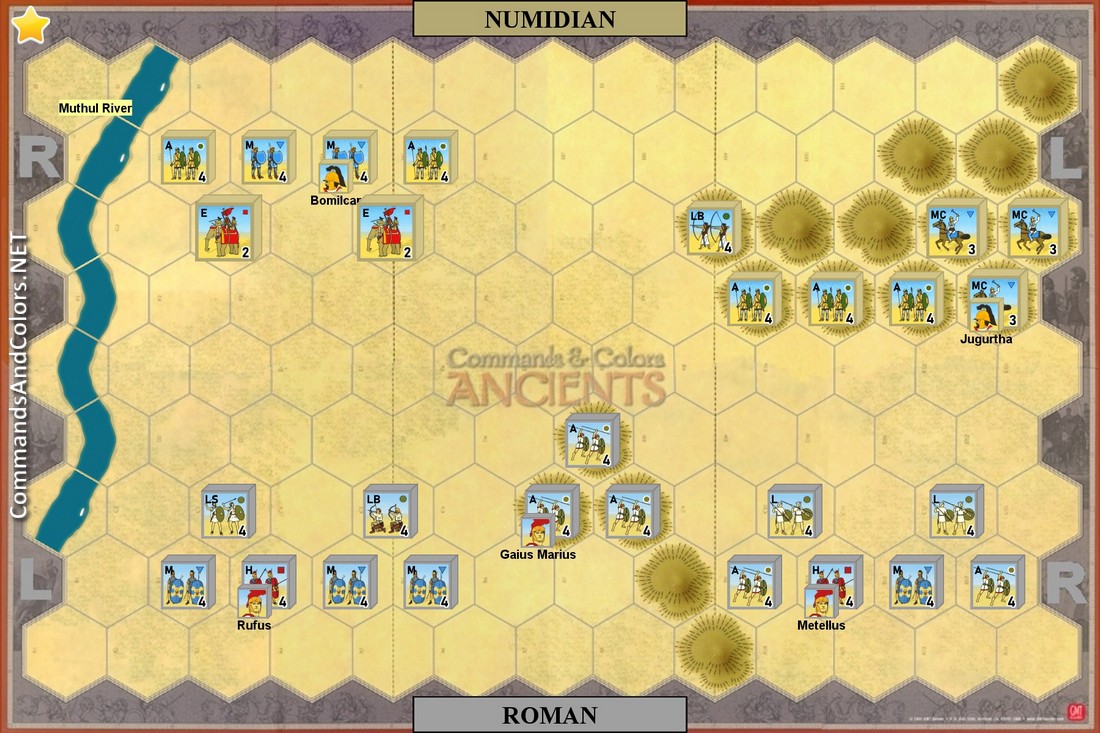 Special Rules
Roman player starts the game with a "Line Command" card in his hand.

Mark-McG replied the topic: #3600 4 months 3 weeks ago
VASSAL save file attached.
Roman player should draw the Line Command from the discard pile prior to drawing the remainder of their Command Cards

Mark-McG replied the topic: #3599 4 months 3 weeks ago
Muthal River is impassable? That is the default
Read More...