Historical Background
In 279 BC a large Celtic (aka Gauls) army descended on Greece. Part of this force under the leadership of Bolgios attacked towards Macedonia. The Celts offered the King of Macedonia, the recently crowned Ptolemy Ceraunos (See Battle of Corupedium), peace terms in return for money. Ptolemy, confident in the once all conquering Macedonian troops, refused and offered battle. His army was soundly defeated and his head removed forcibly from his body by the victorious Celts.
The Macedonians would look to the Son of Demetrius, Antigonus Gonatus, to become their saviour (See Battle of Lysimacheia).
The stage is set. The battle lines are drawn and you are in command. The rest is history. 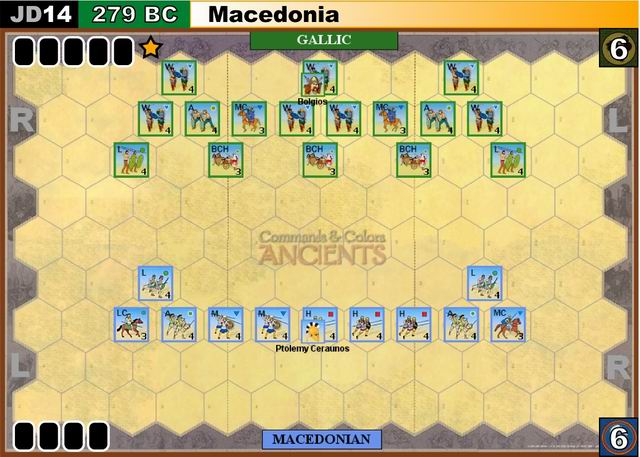 Special Rules
(Optional) Ptolemy Ceraunos rode into battle on an elephant. When he is attached to a unit he is a leader and all normal leader rules apply. He may never attach to a cavalry unit. On his own he is considered a single block elephant unit and imparts no leadership benefits to himself or adjacent units. If he is to be ordered separately he may use any cards that apply to leaders or elephants. (See examples below).

Ptolemy Ceraunos examples
He is attached to a heavy infantry unit. An "Order heavy troops" card is played. Ptolemy and his unit may be ordered separately. Ptolemy can now move up 2 hexes and battle as an elephant unless he had moved to join a new unit.
On his own he would be killed like an elephant e.g red square. If attached he could only be killed as a result of leader casualty check. When the last block of his unit is eliminated he takes a leader casualty check and then evades. If he is now on his own he would now be considered an elaphant unit.