Historical Background
Following the Celtic invasion of Macedonia about 20,000 Celts were in the region of the City of Lysimacheia in the Hellespont. Antigonus Gonatus, the son of Demetrius the former King of Macedonia and claimant to the empire of Alexander, had recently crossed from Asia over to the Hellespont with a mercenary army of 14,500 infantry and 1,800 cavalry. He subsequently entered into peace negotiations with the local Celts.
The Celts seeing the opulence of Antigonus' unfortified camp resolved to return and take it by force. Antigonus got wind of the plot and had the camp evacuated and his troops hidden in nearby woods. At night the Celts approached the camp and finding it deserted and bereft of treasure they proceeded to the coast and the ships of Antigonus in search of booty.
Antigonus then attacked and routed the surprised Celts who were pinned against the coast. Following his stunning victory Antigonus was asked to become King of Macedonia a position he fairly successfully kept until his death in 239 BC at the age of 80.
The stage is set. The battle lines are drawn and you are in command. The rest is history. 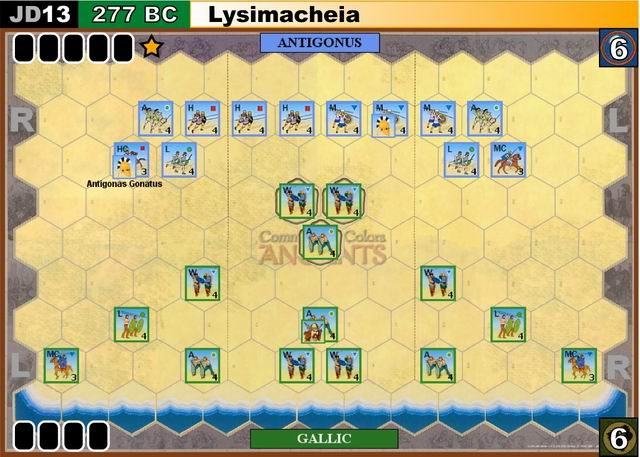 Special Rules
The Antigonid camp was not fortified. Camp tiles have no defensive benefit on combat.

Mark-McG replied the topic: #2188 5 years 4 months ago
that is how I understand it
the defender cannot ignore a sword or flag because of the camp.
The occupant of the unfortified camp must still roll one fewer battle dice than usual when it battles.

mk20336 replied the topic: #2187 5 years 4 months ago
"The Antigonid camp was not fortified. Camp tiles have no defensive benefit on combat." I understand that defending unit will not get ability to ignore one XSW and one flag. But does such unit roll one dice less?
Read More...