Historical Background
The Romans had been campaigning on behalf of their Massiliote allies against the Saluvii tribe of Gauls in the Rhone Valley. When the Saluvii King fled to the Allobroges tribe, the Romans sent an army against them commanded by Gnaeus Domitius. Domitius achieved a stunning victory against the Allobroges at Vindalium in early 121BC. The remains of the Allobroges were then reinforced by the Averni tribe led by their King Bituitus, and the combined army reportedly totalled 180,000 warriors, but looking at similar figures for other Gallic armies a fighting force of 40-50,000 is probably more realistic.
The Romans now sent out a new army of approximately 30,000 men commanded by the Consul Quintus Fabius Maximus.The Gauls and Romans met next to the Rhone river where it is joined by the Isara river from the east. Bituitus, scornful of the Roman numbers, suffered a massive defeat which became even more catastrophic when one of only two bridges he had thrown across the Rhone collapsed under the weight of his routing army.
The stage is set. The battle lines are drawn and you are in command. Can you change history? 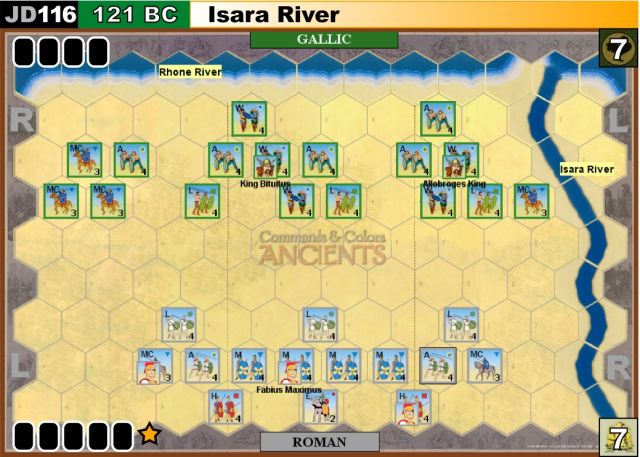 Special Rules
The sea hexes represent the Rhone river and are impassable.

The Isara river is not fordable.

Gallic auxilia infantry units may not use missile fire.

Fright at first sight: Any Gallic infantry unit in close combat with an elephant unit may not ignore any flags rolled by that elephant unit, even if the unit  has an attached leader or is supported by two adjacent friendly units.