Historical Background
The Boii Gauls, when they saw the destruction of the Senones tribe by the Romans, feared that they would be next. They enlisted the help of the Etruscans and the combined army marched on Rome. They were stopped 50 miles short of Rome, at Lake Vadimon, by the army of the consul Publius Cornelius Dolabella who inflicted a massive defeat on them. The Etruscans were mostly wiped out and only a few Boii escaped.
Despite this disaster the Etruscans and Boii joined forces once again in 282 BC, but they were again defeated at Populonia on the Etruscan coast. This defeat of the Boii forced them to make a peace with Rome that would last for nearly 50 years.
The stage is set. The battle lines are drawn and you are in command. Can you change history? 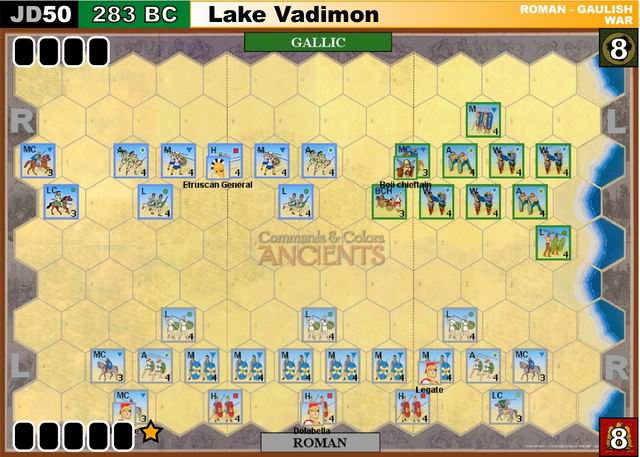 Special Rules
All Gallic units starting in hexes numbered 7 or lower are Etruscans (use Greek blocks). All other Gallic units are Boii (use barbarian blocks). The leaders of the respective armies may only confer leadership abilities on their own troops.