Historical Background
The Senones Gauls had been seriously checked by their defeat at the battle of Sentinum in 295 BC, but just 11 years later they invaded Etruria, under the leadership of Britomaris, and besieged the city of Arretium. The Romans dispatched a relief army under the command of Lucius Caecilius Metellus Denter. The two armies met under the walls of Arretium where the Romans were heavily defeated and Metellus killed.
The Senones victory was shortlived. After Roman envoys, negotiating with the Gauls over the release of their prisoners, were murdered, a Roman army under Manius Curius Dentatus advanced into the territory of the Senones, defeated them in battle and thoroughly subjugated them so that they never rose against Rome again.
The stage is set. The battle lines are drawn and you are in command. Can you change history? 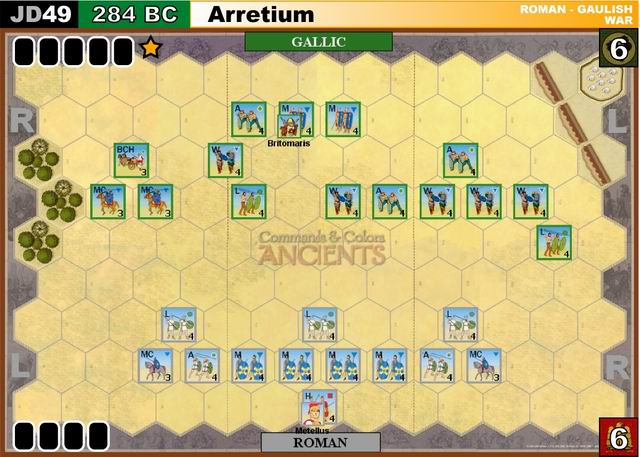 Special Rules
Ramparts represent the walls of Arretium and are impassable.