Historical Background
Nearly 30 years after the Sack of Rome by the Gauls (see Battle of Allia River) another Gallic force was approaching Rome possibly hired by the Tiburtines with whom the Romans were currently at war. After a stand off with the Gauls in 361 BC at the Anio River they were defeated at the Battle of Colline Gate in 360 BC. Another force of Gauls, possibly the same ones as previously approached Rome in 358 BC and camped near Pedum. Rome fearful of the old Gallic threat appointed the Dictator Gaius Sulpicius to deal with the emergency.
Sulpicius was unwilling to do battle as he realised the Gauls were short of supplies and would weaken as time went by, but his troops, eager for battle, started to become mutinous so Sulpicius marched out and aligned his troops at the foot of the mountains. He had also ordered the pack saddles to be taken off the mules and armed the muleteers for combat and stiffened them with some cavalry. He sent this force into the woods above his camp and would signal them to attack at the appropriate moment.
The Gauls, seeing the Romans form up, immediately attacked. The Roman right with Sulpicius was assaulted first, but they managed with his help to first hold and then counterattack. Roman Master of Horse Marcus Valerius routed the Gallic right flank and with the Gauls now fleeing for their camp, Sulpicius ordered the muleteers to attack into the panicked Gauls and complete the victory.
The stage is set. The battle lines are drawn and you are in command. The rest is history. 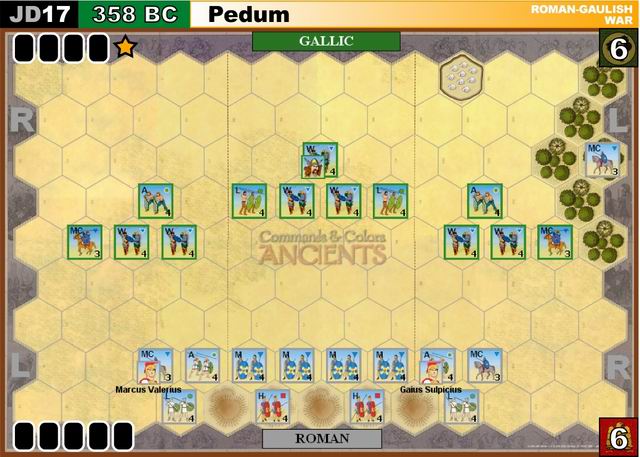 Special Rules
No Gallic unit may enter a woods hex unit the Roman cavaly unit in hex G13 (the muleteers) has been ordered.

The Roman player gains 1 victory banner (once only) if one of his units ends its turn on the Gallic camp in hex I10.