Historical Background
The Gallic Tribe of the Senones, led by their King Brennus, Crossed South over the Appenines from The Po Valley to raid the rich Etruscan city of Clusium. The Romans were called upon to arbitrate the conflict, but the "neutral" arbitrators, with typical Roman arogance, sided with the Etruscans. Brennus therefore decided to also head south and plunder Rome.
A heavily ountnumbered Roman army met the Gauls about 11 miles north of Rome in the Allia river valley where it runs into the Tiber River. To counter the massed Gauls the Romans formed a thin line with their flanks secured by the Tiber and some hills where they posted a force of reserves. Brennus started his attack against the Roman hill position which was soon overrun. With their flank now turned the main Roman line was easily put to flight with many Romans cut down as they ran.
The Gauls proceeded to sack Rome and exact a large ransom in gold. As Brennus was to supposed to have said "Woe to the vanquished".
The stage is set. The battle lines are drawn and you are in command. The rest is history. 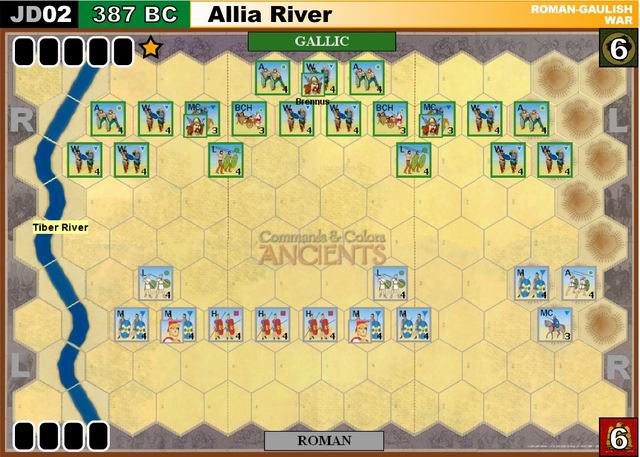 Warboard replied the topic: #3862 1 year 9 months ago
From Instagram @warboard: "I am Spartacus!", where dice roll determines which units are ordered to fight harder than normal, luckily activates the hastati unit with an attached leader, and both remaining heavy Triarii formations. With these, Rome kills enough Gauls for their army to reach breaking point, and though still outnumbering the Romans greatly, they retreat off the field. 6 to 5 bloody victory for Rome.
Read More...