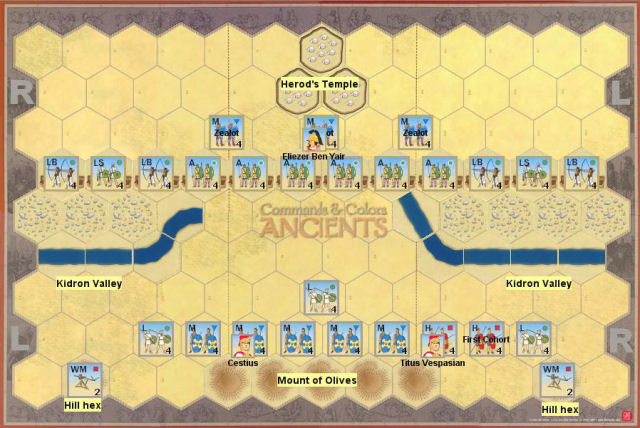 Special Rules:
The Kidron Valley is a fordable river for game purposes. In reality it is a deep ravine, a formidable military obstacle.

No Judean unit may move from a rampart hex to a river or rocky terrain hex. In effect, this limits Judean movement from the ramparts to the four open terrain hexes in the center. Roman
units are not so restricted. Design Note: This simulates the presence of the Eastern Gate in the center of the Temple fortification complex. That the Romans can move to/from rampart to/from river or stony terrain hexes reflects the presence of Roman siege engines, namely, the towers.

The three Judean Zealots are special units. Place a special unit block in the same hex as the Zealots. Zealots may conduct ranged fire as though they were slingers.

GF1954 replied the topic: #2747 3 years 10 months ago
2 solitaire games with each side winning by the score of 6 - 4. In the first, the Romans tried a frontal assault in the center but failed to break through. In the second game though, the Romans decided to do a flank attack. This was successful on the Judean's left flank. While this was going on, the Romans attempted to advance in the center but after some losses from missile fire pulled back. With the Romans advancing on the Judean camps, the resistance was force to vacate some of the ramparts to meet the threat. But as luck would have it, the Romans got a double time card and used it to hit back in the center and managed to end the game on the ramparts. An interesting scenario. I am curious to see if the Romans can succeed with a frontal assault in this one.
Read More...