Historical Background
The island of Anglesey (Ynys Mon to the Welsh and Mona Insulis to the Romans), rich in grain and copper mines, became a refuge for several tribes opposed to the Roman occupation of Britain. The druids there gave moral and material support to the resistance, and it was felt by Rome that Britain would never be at peace until the druids were eradicated. For those reasons the imperiailgovernor Gaius Suetonius Paulinus, an able and ambitious generai with Agricola on his staff, lead his XIV legion "Gemina" to lay waste to the isle. When the Romans arrived at the Menai Straits they found Mona defended by many Celtic warriors, mainly of the warlike Ordovices tribe. Tattooed with blue woad, the Celts stood taunting their enemy. Their druids stood nearby in circles raising their arms to heaven and shouting curses, while women with black robes and dishevelled hair ran here and there wailing and screaming. The superstitious Romans were rooted to the spot, terrified by this supernatural display, making themselves an easy target for Celtic ranged combat. Finally, emboldened by their leaders, the legionaries crossed the shallow straits. The Celts put up a fierce tight, but eventually their lines broke and they were slaughtered, and the druids were burned alive in their sacred oak grave. Despite this crushing defeat, the Ordovices continued to resist and were never fully Romanized.
The stage is set. The battle lines are drawn and you are in command. Can you change history? 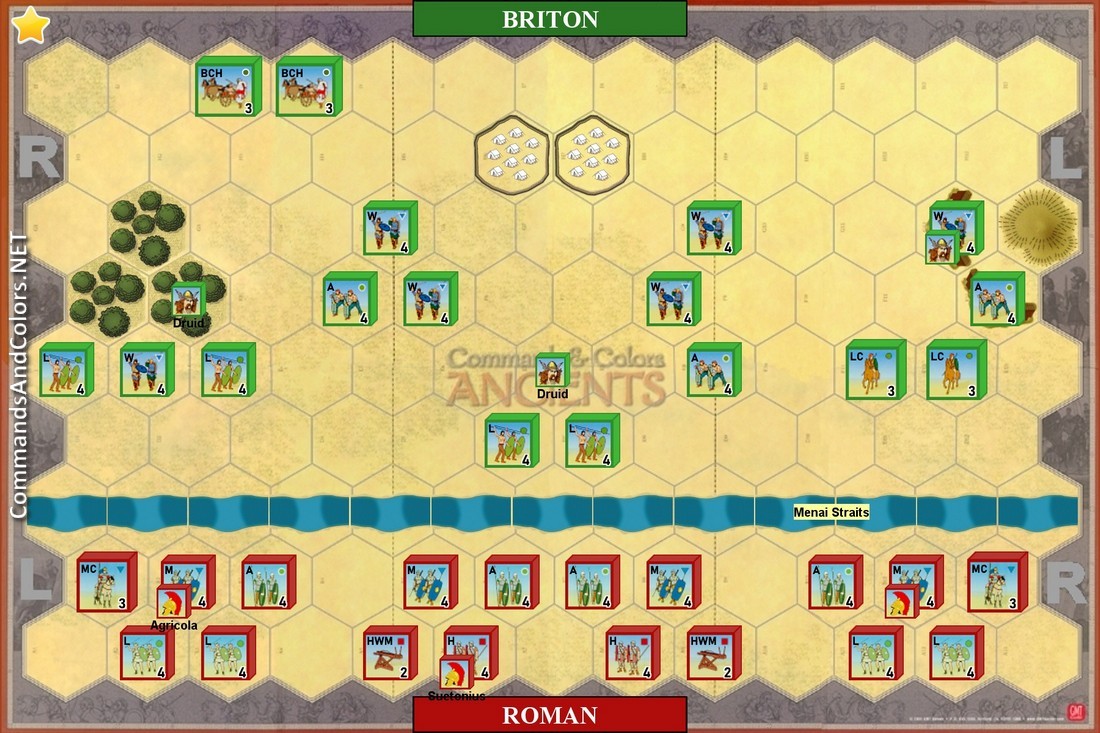 Special Rules
When a Roman unit occupies a camp hex at the start of a turn, remove the terrain hex and collect one Banner.

Julian Legions rule is in effect for the Romans.

Druids may not move, except normal Leader evade. They may never occupy the same hex as a friendly unit (units may move or retreat through Druids). Adjacent units may ignore one flag and gain hit benefits for both Range and Close Combat.*

No Roman unit in any section may advance into the river until the start of a turn where the leader in that section is already on the Briton side of the river.*

The Menai Straits is played as a fordable River.

When Mona Insulis is being played as part of the Para Bellum Extended Battle System, the Roman player will attempt to rally units lost after Mona Insulis. Roman units that are not rallied will not be deployed in the final Para Bellum battle, Boudica's Revolt - Watling Street-61 AD.

manassas7509 replied the topic: #3916 1 year 6 months ago
That's how we played it. Once across the leader has sufficiently inspired his section to want to cross the river. Still painfully slow for the Romans. Fortunately Vassal gave me three Line Command cards and a Double Time so I was able to get into good positions to cross once the three leaders got across and managed to win the scenario handily. If the Britons were to ever get lucky and knock off a leader or two before he's able to get across the river I can see this degrading to a tedious ranged fire dual. Agree with the sentiment that the scenario rules are vague and not well thought out.
GF1954 replied the topic: #2847 3 years 9 months ago
Solitaire- Britons won 7 - 6. Actually was closer than I thought it would be. The Romans did get across the river on the left flank and in the center. I think this is longest I have ever played a scenario.
BrentS replied the topic: #1622 6 years 7 months ago
I'd agree the scenario's broken as it is.....although it might not be evident on every play. My inclination would be to keep the spirit of the scenario and allow Roman units to cross in a section for the rest of the game once the leader had crossed, even if he was killed or forced back across the river thereafter.

mk20336 replied the topic: #1621 6 years 7 months ago
I confirm I had such situation - leader crosses, dies and then what? No unit able to move beside the river?

Mark-McG replied the topic: #1619 6 years 7 months ago
"No Roman unit in any section may advance into the river until the start of a turn where the leader in that section is already on the Briton side of the river.*"

I would rate this as one of the most poorly expressed and ill considered Special Rules in the entire C&C series. Aside from making no sense without Tony Curtis's clarification, the concept that leaders die seems to have entirely escaped the designer. So with 2 of 3 Roman leaders dead, the scenario descends into a LENGTHY exchange of missiles.

Crossing rivers isn't easy to begin with, and if they had gone with something simple like Roman units in the river can't ignore flags unless with a leader, then that might have worked simply, and shown the fearfulness. Instead the straitjacketed history Special Rule is a game mechanic disaster.
BrentS replied the topic: #1618 6 years 7 months ago
Just setting up to replay this one and yes, both close combat and ranged attacks hit on helmets if a druid is adjacent to the unit.